Visiting hospital. Man says he missed by a few hours having his foot amputated. Lucky. At nurses station a half dozen folks charting.

In Buddhism there are numerous paths of spiritual training. Each has its unique goal, purpose, and benefits for oneself and others. But in order to be able to benefit truly, it is very important to understand the principal purpose underlying these practices. If we take the wrong turn at a crossroads, every step we make will take us further from our destination. In the same way, if we fail to realize the nature of our spiritual goal and what our aim should be, our practice will not be beneficial, or at least not nearly as helpful as it could otherwise be. The main focus of all of our training in Dharma is to benefit our minds.... If we do not improve our minds, then regardless of how many understandings we have about the ten stages, the five paths, ceremonies, philosophies, and so forth, they'll all become objects that we never apply to ourselves. It can be very simple, like when we are facing the right direction--every step will bring us closer to our destination.
(- Tulku Thondup, in Enlightened Journey)
from Everyday Mind, edited by Jean Smith, a Tricycle book

I'd rather look within and see nothing than look out into the world and see the nothing that comes with a side of nothing. In both cases, there is nothing to behold.

Listening to the sound of bell at beginning and end.

No need to remember, everything is right there at the sounding of the bell.

We enter and sit, stand and leave, without ever moving.

A still, clear, learning without anything added -- like, understanding.
Posted by meetingbrook at 10:59 PM

Just that. Nothing else.

What is this wonder-filled universe?
What constitutes seed?
Who centers the universal wheel?
What is this life beyond form pervading forms?
How may we enter it fully,
Above space and time,
Names and descriptions?
Let my doubts be cleared. 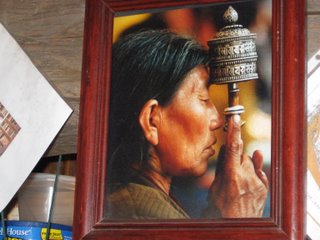 A mistake was made that September morning.

I'm trying to remember what it was I forgot.

I think it had to do with loving the odd God making fire too hot to bear.

Or the men who felt they knew the name of God.

The mistake was trying to avenge and retaliate.

Yes, that's it. There was a chance to teach God something needed by God.

Just because we failed and forgot what to teach, it doesn't mean God cannot learn.

In another moment
He had learned a different way of dying
Called Here and Now, called There and Where and Nowhere.
(--from poem Staying Found, by David Wagoner)

With prayer wheel in hand, someone prays. Someone else is touched by prayer.
Posted by meetingbrook at 11:41 PM

For all these years, my certain Zen:
Neither I nor the world exist.
The sutras neat within the box,
My staff hooked upon the wall,
I lie at peace in moonlight
Or, hearing water plashing on the rock,
Sit up. None can purchase pleasure such as this:
Spangled across the step-moss, a million coins! 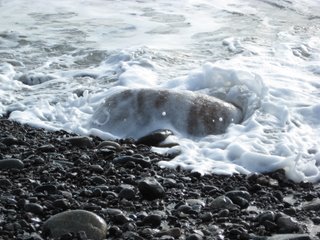 It is our grace to see swimming stones along end of January on Jasper Beach. A similar grace to that of hearing words of men in prison speak depth of life bursting through the surface.

The prison of popular ignorance is crowded. If there be freedom, release the mind.

Each stone calls out to passing edge of tide -- listen to receding call.

We are poor passing facts,
warned by that to give
each figure in the photograph
his living name.
(--from poem Epilogue, by Robert Lowell)

For now let's say -- brother, sister, friend, father, mother, you and you and you.

A million times each one.

Seeing pleasure such as this.

Move with care.
Posted by meetingbrook at 10:24 PM

The dory rower has come down from wind vane. He's tired. He's taking a few weeks off.

Those who awaken never rest in one place.
Like swans, they rise and leave the lake.
On the air they rise and fly an invisible course.
Their food is knowledge.
They live on emptiness.
They have seen how to break free.
Who can follow them?
- Buddha in the Dhammapada 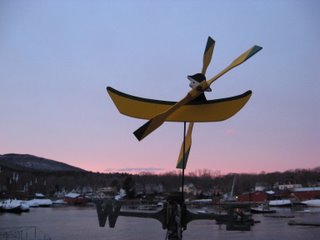 Watchng Kieslowski's Red. "Be," the retired judge tells the young woman. She wants to know what else he knows. "Who are you?" she asks.

Right. Who are we? And what are we doing in one another's life?

Below Machiasport, Bucks Harbor, the view from FAA parking atop hill begins with enormous radar ball above Downeast Correctional Facility where once an Air Force installation was housed. We have our first Meetingbrook Conversation at the prison there.

This old monk meditates and
Rests in the empty mountains
In loneliness and stillness
Through the days and nights.
When I leave the pure cliffs,
I am distracted by callers
The world of people is first
And always the world of people.
- Seigan Soi (1588-1661) 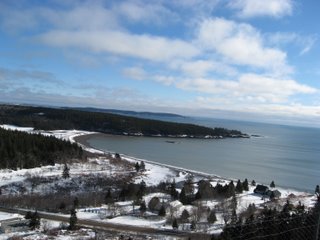 We take gift of the view. It's not theirs to see. They know there's one there. They encourage us to go see it. It's an odd clarity that sees through others.

People are always people. We have our ways about us.

Good to see faces of friends again. The mere art and practice of conversation.

About enthusiasm, ego, waving energy, ourselves. With the help of Eckhart Tolle.

These days of odd disorder retrieving some clarity.
Posted by meetingbrook at 11:17 PM

Maybe there is no stopping.

I'm not saying everything is busy, busy, busy. Just that, maybe, there is no stopping.

The mind of attachment arises from the stopping mind. So does the cycle of transmigration. This stopping becomes the bonds of life and death. Stopping means the mind is being detained by some matter, which may be any matter at all. If there is some thought within the mind, though you listen to the words spoken by another, you will not really be able to hear. This is because your mind has stopped with your own thoughts. When facing a single tree, if you look at a single one of its red leaves, you will not see all the others. When the eye is not set on any one leaf, and you face the tree with nothing at all in mind, any number of leaves are visible to the eye without limit.
- Takuan

Even the Heart Sutra contains the words:

No suffering, no origination,
no stopping, no path, no cognition,
also no attainment with nothing to attain.

Some think meditation is meant to stop thoughts, stop the mind from ushering in thought after thought which we weave into story narrative, jumping on the boat of obsessive replay until we are far down river away from home.

Meditation is meant to help us recognize when we're being carried away by thoughts. It helps to keep us aware of the involuntary departures we make when beckoned by thoughts. This awareness and recognition are gifts of meditation. With them we can return home easier and more quickly.

BAGHDAD — Five American soldiers were killed in the northern city of Mosul on Monday when militants attacked them with a roadside bomb and then fired on their patrol from a nearby mosque with machine guns, military officials said. The troops returned fire and Iraqi forces raided the mosque, but the gunmen had fled, they said.

It was the second catastrophic attack on United States forces this month, after a house rigged with explosives killed six soldiers in Diyala three weeks ago. The attack underscored the grim situation in Mosul, Iraq's northern hub, which remains a stronghold for Sunni extremist fighters.

In addition, as many as 60 people were killed and 280 wounded in a huge blast in Mosul on Wednesday as Iraqi soldiers entered a building packed with thousands of pounds of explosives. The following day the provincial police chief was assassinated after he visited the site of the blast and an angry crowd of people gathered around him.

Some are taken away suddenly. Taken away and, then, comes grief. The war is still with us. All the distractions of primaries, caucuses, and football championships can only divert those not waiting for phone call or doorbell to sound. 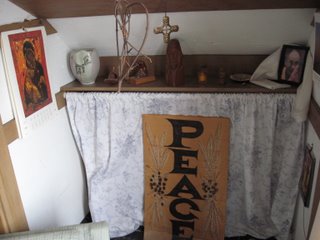 Tonight the President of the United States will deliver his final State of the Union address. Many are pleased it's his last one. I no longer know what to think about the man and the perplexing policies and decisions he's made. I do know my hope we do not see his like anytime soon again.

Nor does prayer stop. Nor meditation. Neither does conversation about what kind of person, what kind of world we long to manifest.

Today is the feast of Thomas Aquinas.

St Thomas Aquinas (1225 - 1274)
He was born of a noble family in southern Italy, and was educated by the Benedictines. In the normal course of events he would have joined that order and taken up a position suitable to his rank; but he decided to become a Dominican instead. His family were so scandalised by this disreputable plan that they kidnapped him and kept him prisoner for over a year; but he was more obstinate than they were, and he had his way at last.
He studied in Paris and in Cologne under the great philosopher St Albert the Great. It was a time of great philosophical ferment. The writings of Aristotle, the greatest philosopher of the ancient world, had been newly rediscovered, and were becoming available to people in the West for the first time in a thousand years. Many feared that Aristotelianism was flatly contradictory to Christianity, and the teaching of Aristotle was banned in many universities at this time – the fact that Aristotle’s works were coming to the West from mostly Muslim sources did nothing to help matters.
Into this chaos Thomas brought simple, straightforward sense. Truth cannot contradict truth: if Aristotle (the great, infallible pagan philosopher) appears to contradict Christianity (which we know by faith to be true), then either Aristotle is wrong or the contradiction is in fact illusory. And so Thomas studied, and taught, and argued, and eventually the simple, common-sense philosophy that he worked out brought an end to the controversy. Out of his work came many writings on philosophy and theology, including the Summa Theologiae, a standard textbook for many centuries and still an irreplaceable resource today. Out of his depth of learning came, also, the dazzling poetry of the liturgy for Corpus Christi. And out of his sanctity came the day when, celebrating Mass, he had a vision that, he said, made all his writings seem like so much straw; and he wrote no more.
Let us pray for the Holy Spirit to inspire us, like St Thomas, to love God with our minds as well as our hearts; and if we come across a fact or a teaching that seems to us to contradict our faith, let us not reject it but investigate it: for the truth that it contains can never contradict the truth that is God.
(--from Universalis, http://www.universalis.com/)

It'll be, with luck, the last straw.
Posted by meetingbrook at 4:04 PM

Whatever happens, the only thing we have any say about is our response to it.

"Absolute perfection is here and now, not in some future, near or far. The secret is in action - here and now. It is your behavior that blinds you to yourself. Disregard whatever you think yourself to be and act as if you were absolutely perfect - whatever your idea of perfection may be. All you need is courage."
(--Nisargadatta Maharaj) 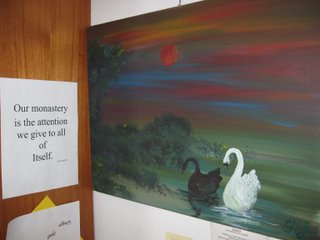 Wandering through this monastery without walls, I greet and bow to so many members of the community.

Handful here, handful there -- monks of no order become monastics of no other.

All on their own.

Posted by meetingbrook at 9:15 PM