Be nothing else.
Posted by meetingbrook at 10:35 PM

Let each their own faith.

There’s a tree that existed before the woods,
In age twice as old.
Its roots suffered as the valley changed,
Its leaves deformed by wind and frost.
People all laugh at its withered aspect,
Caring nothing about the core’s beauty.
When the bark is stripped off,
Only essence remains.
- Han Shan (early 9th century)

Pray yours be open.
Posted by meetingbrook at 10:26 PM

The capacity of Mind is vast and great: It is like the emptiness of
space; It has neither breadth nor bounds; It is neither square nor round;
neither large nor small; It is neither blue nor yellow nor red nor white; It
has neither upper nor lower, long nor short; It knows of neither anger nor
pleasure; Neither right nor wrong; Neither good nor evil; It is without
beginning and without end.
- Sixth Patriarch

Doesn't know other.
Posted by meetingbrook at 11:09 PM

"What is" by any other name is the presencing Lord of creation, the permeating dwelling Christ within this existence, and the pervasive revealing Spirit of wisdom, love, and compassion of the now and present moment.

Each and every spring,
Blossoms gave my mind its
Comfort and pleasure:
Now more than sixty years
Have gone by like this.
- Saigyo (1118-1190)

Spring dawns cold along mountain. Sun warms quietly the yawning trails. Sacredness bows to each being passing in place or on foot.

Each is blessed!
Posted by meetingbrook at 6:55 AM

In early morning climb with ski poles and dog up Ragged Mtn, the solitude is complemented by another hiker with ski poles and dog passing the high incline like hermits on Cold Mtn. Her dog brings the excitable Rokpa back to waiting leash so they can continue on after trail greeting. Just some solitaries with loving companions walking up frozen ground!

Though frosts come down
night after night,
what does it matter?
They melt in morning sun.
Though snow falls
each passing year,
what does it matter?
With spring days it thaws.
Yet once let them settle
on a person's head,
fall and pile up--
then the new year
may come and go,
but never you'll see them fade away.
--Ryokan (trans. Burton Watson)

Sitting on stump then stone with green scarf as zafu cover -- the glittering expanse of Hosmer Pond, Penobscot Bay, Megunticook Mtn, and glorious sky -- tucked inside meditation and revealing mantra: this is presencing God! 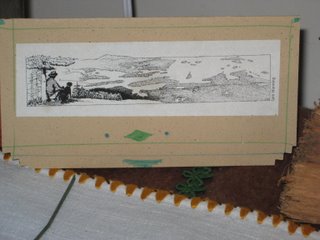 Taxes are done. The president is giving me an incentive to spend. That's nice.

"If I could meditate, I'd be a better person."
When people start to meditate or to work with any kind of spiritual discipline, they often think that somehow they're going to improve, which is a sort of subtle aggression against who they really are. It's a bit like saying, "If I jog, I'll be a much better person." "If I could only get a nicer house, I'd be a better person." "If I could meditate and calm down, I'd be a better person"... But loving-kindness - maitri - toward ourselves doesn't mean getting rid of anything. Maitri means that we can still be crazy after all these years. We can still be angry after all these years. We can still be timid or jealous or full of feelings of unworthiness. The point is not to try to change ourselves. Meditation practice isn't about trying to throw ourselves away and become something better. It's about befriending who we are already. The ground of practice is you or me or whoever we are right now, just as we are. That's the ground, that's what we study, that's what we come to know with tremendous curiosity and interest.
(- Pema Chodron, The Wisdom of No Escape and the Path of Loving-Kindness from Everyday Mind, a Tricycle book edited by Jean Smith)

Talked with two curmudgeons today, one I hadn't seen in half a year. He says he'll be working on a house in France that Leonardo DaVinci himself once lived in.

Leonardo is best known for his painting the Mona Lisa, which is generally considered the most recognizable work of art in the world. He kept it with him for most of his life, working on it now and again. Today, it is probably the most analyzed work of art in history. For centuries, scholars have tried to determine the identity of the woman in the painting. A computer graphics consultant analyzed the painting and found that the nose, mouth, forehead, cheekbones, and eyebrows all lined up with a portrait Leonardo painted of himself. So he may have used himself as the model.
(--Garrison Kiellor, The Writer's Almanac)

We are models of ourselves.

It doesn't surprise that enigmatic self reflection appears as other.

The other's gaze is what places us where and as we are.

Seen, there we are.

As what we see.
Posted by meetingbrook at 10:38 PM

Bald Mountain has no snow on southern side. We hold our breath.

Yoshino Mountain:
White puffs on cherry limbs
Are fallen snow,
Informing me that blossoms
Will be late this year.
- Saigyo (1118-1190)

Forty-eight degrees leads us to quiet caution. Rokpa runs and leaps on snow patches on northeast side of Ragged Mountain, lays on them, tears wildly tossing white slosh crystals as he practices his Border Collie nutso sprints, and then lays across receding familiar puppy under-footing gnawing branch fragment while watching to see if I'm about to try to snatch it away. 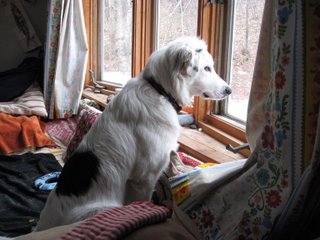 These days when his female human companion retires to retreat at monastery he tries to be content with male human companion who trudges mountainside and scans for no-longer-hibernating black with white stripe waddling folk seeking food. This morning at Birch Point State Park we sat and watched three species of fowl bob in placid high tide off rocky promenade. He's seeing things for the first time.

As do poets and those about to die -- see things for the first time.
Posted by meetingbrook at 5:00 PM

Skunk walks into barn. Passes Rokpa. Passes me. (The horror!)

The unenlightened person does not understand his own true nature, does not realize the Pure Land in his own body, and thus petitions all over. The enlightened person never differs no matter where he is. For this reason the Buddha says, “Wherever I may be I am always in comfort and bliss…If only your mind is pure, your own nature is itself the Pure Land of the West.
- Platform Sutra

It will be a long spring if skunks make us a steady stop.

The thing about skunks is their smell. They put it on others. 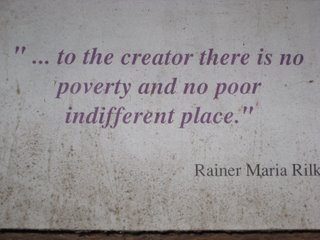 We'll have to be wary.

Avoid the stinkers.
Posted by meetingbrook at 10:09 PM