“Love the whole world as a mother loves her only child.”
(--Hindu Prince Gautama Siddharta, the founder of Buddhism, 563-483 B.C.)

So much to learn about mothering!

One's own home!
Posted by meetingbrook at 2:08 PM

Two weeks later, Mu-ge the cat walks back in the door. Just like that. 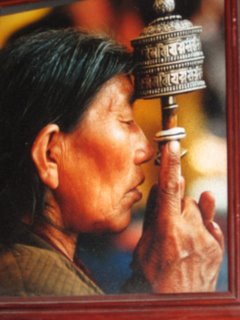 No questioning why. Just life.

At itself. With itself.

Looking as itself.
Posted by meetingbrook at 11:58 PM

I row small skiff around harbor.

Someone asks about a spiritual teacher's connection to religion. "He's not not Christian," is the response.

It's not not this.

Heaven help us.
Posted by meetingbrook at 9:31 PM

On the count of three, jump!

When Iraq was invaded so many cheered. When Iran is attacked, so many will leave.

Leaving this country because it has disappeared will not be easy. There's a need for a foothold; a place from which to step off. That's the difficulty with a disappeared country; there's no ground remaining to it.

As if Jesus knew our situation. He lived so long ago. Good God -- this is the 21st century! What use could someone from the first century have? Does he see us disappearing?

LOOK back on time with kindly eyes,
He doubtless did his best;
How softly sinks his trembling sun
In human nature’s west!
(--Emily Dickinson (1830–86). Complete Poems. 1924.)

We'll look back at this time in our country and wonder how it was everyone was so impotent and uncaring.

Rokpa the border collie licks peanut butter from my fingers. Rain tires us after 5:30am walk on Ragged Mtn. Sunday morning curls onto black chair.

Elsewhere, pastors, priests, rabbis, imams, zen masters, elders, and friends perform their rituals for people who hunger for justice, compassion, and a true experience of integrity. We've been fed illusion. Time to go beyond it.

When I started writing about Guantánamo several years ago, I thought the inmates might be lying and the Pentagon telling the truth. No doubt some inmates lie, and some surely are terrorists. But over time — and it’s painful to write this — I’ve found the inmates to be more credible than American officials.

Both Condoleezza Rice and Robert Gates have pushed to shut down Guantánamo because it undermines America’s standing and influence. They have been overruled by Dick Cheney and other hard-liners. In reality, it would take an exceptional enemy to damage America’s image and interests as much as President Bush and Mr. Cheney already have with Guantánamo.
(--from A Prison of Shame, and It’s Ours, By NICHOLAS D. KRISTOF, Published: May 4, 2008, New York Times)

It is a difficult time. Belief comes hard. Trust in our leaders is so low you'd think someone would notice. Only uncaring arrogance can ignore the somber bitter loss of faith and trust. What will replace what is lost? It is hard to imagine how the people of America will survive the defeat of principles long held dear by generations in this country. A difficult, bleak time.

I've come to a fondness for the universe. So vast. Maybe without end. Of uncertain beginning. A lot like human life. Space might have as many as ten or twelve dimensions. Strings of energy dance emphatically with tonal reverberation at core of the theoretical investigation of matter and (what is called) energy or spirit. Far far beyond our capacity to grasp with our thinking. Yet close, very very close.

What made Nishitani question emptiness on the basis of his own present existence was precisely nihilism. It is through the mediation of nihilism that emptiness was removed from a museum showcase--that is, from its status as a dead 'thing' to be viewed or an object of archaeological study, to make its appearance in the real marketplace as a currency with actual power, restored to its status of living and operative spirit. The real marketplace, of which we speak here, also has the meaning of the town called "The Motley Cow," where Nietzsche's Zarathustra proclaimed his idea of the eternal recurrence. According to Nishitani, this "town called The Motley Cow" means "the multicolored world with its infinite variety of forms"; in other words, the contemporary world. To let emptiness loose into it is to walk that town barefoot, or to stand in the very midst of nihilism. According to Nishitani, it is precisely when standing there that a human being gets in touch with the point of origin or zero point from where religion as religion is born.
(--from Nihilism, Science, and Emptiness in [Keiji] Nishitani, by Hase Shoto, Univ of Hawaii Press)

Posted by meetingbrook at 7:06 AM