Toboggan championships take place over at snowbowl. Saskia and Annie go snowshoeing learning about animal tracks along the St George river. I submit application to adopt rescue dog. It's time.

Snow over everything last night. Tomorrow again. Four to eight inches at a clip.

Moses was looking after the flock of Jethro, his father-in-law priest of Midian.
He led his flock to the far side of the wilderness and came to Horeb, the mountain of God. There the angel of the Lord appeared to him in the shape of a flame of fire, coming from the middle of a bush.
(--Exodus 3:1)

The thought occurs: What if the contemporary Bush is, as he and others claim, the doer/decider of God's will in the world. Such an instrumental possibility that what Mr. Bush has been doing/deciding in the world might be the will of God is a compelling argument to allow God go out of office with spokesman.

BAGHDAD (Reuters) - Five American soldiers were killed in roadside bombings in Iraq on Friday, the U.S. military said on Saturday, while Iraqi police detained 22 suspects in raids against Shi'ite militiamen.

We're lucky to have a man at the helm with such an advisor as God. 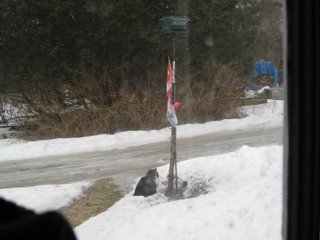 The cat at base of birdfeeder waits for misguidance and distraction to bring careless attraction across his path. If such occurs, he will swipe and slash, feathering snow with stunned fallen bird.

We call cat in when he approaches stakeout. Would we were able to recall those in power who perform their mindless destruction. Whether you argue that killing is part of animal or human nature -- or perhaps hold that the good of the one overarches the good of the many -- there is something unnerving and repulsive about the way humans kill and destroy with mere smirking explanation as rationale.

Cats are cats. But human beings are (some think) what God longs to be. With surrogate carriers such as the depleting president, it's no wonder why contraception and abortion continue as reasonable options. Who would want such a God as one that chooses such a surrogate? Who will be the one to bear resemblance to holiness incarnate?

It's a rarified argument for unborning. But then...perhaps our task is more forgiving. The game is afoot! (Cat bangs at barn screen door wanting in from wanderings.)

Moses, we hear, freed his people from enslaving ignorance.

Who will remember how that is done?

How do we cross today's flooding sea of enslaving ignorance?
Posted by meetingbrook at 10:11 AM

In prison Buddhist Group we laugh with Tony as he points out his mind when he didn't get French fries on his tray yesterday.

We laugh because we know that mind. His flash of anger was (of course) righteous, and (of course) the fault of some other person, and (of course) something with the potential to keep him stewing for hours. But this morning he gifts us with his French fry mind near-dharma talk, and we laugh at our mind's incarceration.

Today (or on the 15th) is celebrated Nirvana Day.

This is a Mahayana Buddhist festival that marks the death of the Buddha. It is also known as Nirvana Day.

Buddhists celebrate the death of the Buddha, because they believe that having attained Enlightenment he achieved freedom from physical existence and its sufferings.

(Women outside Buddhist Temple in Nepal)

The Buddha's death came when he was eighty years old, and had spent forty years teaching after his Enlightenment. He died in a state of meditation, and attained nirvana, a release from the cycle of death and rebirth.

The Paranibbana Sutta describes the Buddha's last days, and passages from it are often read on Parinirvana Day.

Buddhists celebrate Parinirvana Day by meditating or by going to Buddhist temples or monasteries. As with other Buddhist festivals, celebrations vary throughout the world.

In monasteries Parinirvana Day is treated as a social occasion. Food is prepared and some people bring presents such as money, household goods or clothes.

The day is used as an opportunity to reflect on the fact of one's own future death, and on friends or relations who have recently passed away. The idea that all things are transient is central to Buddhist teaching. Loss and impermanence are things to be accepted rather than causes of grief.

Meditations are carried out for the newly deceased to give them help and support wherever they might be now. (http://www.bbc.co.uk/religion/religions/buddhism/holydays/parinirvana.shtml)

News of a suicide within larger prison community. Prayers follow. Here's one. And here's one.

We have a chance to transcend French-fry-mind.

We have a chance to laugh.
Posted by meetingbrook at 12:15 PM

Far, faraway, steep mountain paths,
Treacherous and narrow, ten thousand feet up;
Over boulders and bridges, lichens of green,
White clouds are often seen soaring,
A cascade suspends in mid-air like a bolt of silk;
The moon’s reflection falls on a deep pool, glittering.
I shall climb up the magnificent mountain peak,
To await the arrival of a solitary crane.
- Shide (8th century)

The awaiting man, the flying crane, the solid mountain -- these are not three things.

If we see things the way they are, we are not other than the way we are.

I Close My Eyes

I close my eyes like a good little boy at night in bed,
as I was told to do by my mother when she lived,
and before bed I brush my teeth and slip on my pajamas,
as I was told, and look forward to tomorrow.

I do all things required of me to make me a citizen of sterling worth.
I keep a job and come home each evening for dinner. I arrive at the
same time on the same train to give my family a sense of order.

I obey traffic signals. I am cordial to strangers, I answer my
mail promptly. I keep a balanced checking account. Why can't I
live forever?
Poem: "I Close My Eyes" by David Ignatow from Against the Evidence: Selected Poems 1934-1994. Wesleyan University Press, 1994. 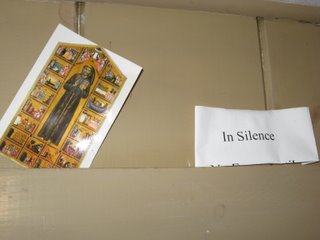 Any one word is enough to introduce extraneous meaning into an already eloquent stillness of one's own presentation. Be careful about the impulse to speak. The whole world came about because of a few words.

There is much to listen to.

If you do say anything, nothing will ever be the same.

We must allow nothingness the distinctive change of its own way.
Posted by meetingbrook at 9:55 PM

This lent I will lose wait. No waiting. See the revelation here as it is now.

I cannot find the Monastery of Heaped Fragrance,
Miles up now into the clouds of the summit.
There is no footpath through the ancient woods.
Where did the bell sound,
Deep in the sound, deep in the mountain?
The voice of the torrent gulps over jagged stones;
Sunlight hardly warms the bluish pines.
As dusk deepens in these unfathomable mazes,
I practice meditation
To subdue the dragon of desire.
- Wang Wei (701–761)

Today we remember what we dimly intuit: nothing is excluded from life -- not even death. 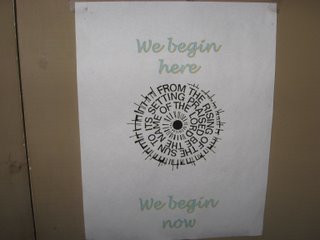 This lent I will lose wait and move with movement itself.

The immediacy and diversity of Christ's revealing mind is upon us.

It is Easter morning, Christmas evening, Tibetan and Chinese new year, followed by Buddha's Nirvana day -- all rolled into one.

Time says: "Wait a while; see what comes."

The whole universe reveals itself.
Posted by meetingbrook at 11:47 PM

On Climbing the Highest Peak of Stone Gate

At dawn with staff in hand I climbed the crags,
At dusk I made my camp among the mountains.
Only a few peaks rise as high as this house,
Facing the crags, it overlooks winding streams.
In front of its gates a vast forest stretches.
While boulders are heaped round its very steps.
Hemmed in by mountains, there seems no way out,
The track gets lost among the thick bamboos.
Deep in meditation, how can I part from Truth?
I cherish the Way and never will swerve from it 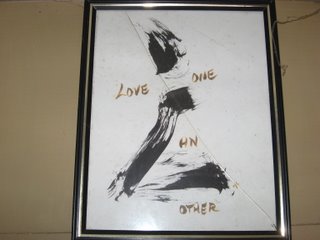 Election is not the importance we think it is.

The drama of it.

Acting, not making. That's what Alan Watts says the difference is between two understandings of God. God is builder king in west. God is acting self in east. Boss versus theater troupe.

The unborn Dharma disappeared in both Japan and China, and it has long since been forgotten. But now it has appeared in the world again. Once you come to know without any doubt that the marvelous illuminative wisdom of the Unborn is the Buddha-mind, and that the Buddha-mind puts all things in perfect order by means of the Unborn, then you can no longer be deluded or led astray by others.
--Bankei (1622-1693) 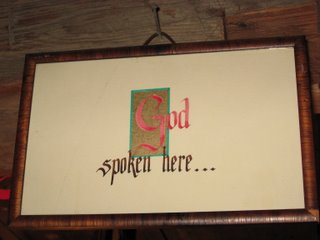 Divinely recognize your true self beyond stage presence.

Put nothing between you and who you really are.
Posted by meetingbrook at 11:24 PM

Want anything? Want nothing?

In everyone it towers like
A mile high wall,
Flashing a great precious light
In everyone’s presence.
One thought ten thousand years,
Ten thousand years one thought,
Eating when hungry,
Sleeping when tired,
Who worries about the alternation
Of light and dark,
The change of the seasons?
- Daio (1235-1309)

The football game ends the way they all do: one team wins, one loses. Only the names change.

Seek the Lord,
all you, the humble of the earth,
who obey his commands.
Seek integrity,
seek humility:
you may perhaps find shelter
on the day of the anger of the Lord.

In your midst I will leave
a humble and lowly people,
and those who are left in Israel will seek refuge in the name of the Lord.
They will do no wrong,
will tell no lies;
and the perjured tongue will no longer
be found in their mouths.
But they will be able to graze and rest
with no one to disturb them.
(--Zephaniah 2:3 - 3:13)

February comes, and January falls of itself.

At practice tonight we read Chuang Tzu by way of Thomas Merton. We speak of wu-wei, non-doing.

The essential message of Taoism is that life constitutes an organic, interconnected whole which undergoes constant transformation.

This unceasing flow of change manifests itself as a natural order governed by unalterable, yet perceivable laws. Paradoxically, it is the constancy of these governing principles (like the rising and setting of the sun and moon and the changing of the seasons) that allows people to recognize and utilize them in their own process of transformation. Gaining an awareness of life's essential unity and learning to cooperate with its natural flow and order enables people to attain a state of being that is both fully free and independent and at the same time fully connected to the life flow of the Universe - being at one with the Tao. From the Taoist viewpoint this represents the ultimate stage of human existence.

The writings of the legendary Taoist sages, Lao Tzu and Chuang Tzu, furnish us with specific principles as a guide to attaining this state of oneness. Through understanding these principles and applying them to daily living we may consciously become a part of life's flow.

A key principle in realizing our oneness with the Tao is that of wu-wei, or "non-doing." Wu-wei refers to behavior that arises from a sense of oneself as connected to others and to one's environment. It is not motivated by a sense of separateness. It is action that is spontaneous and effortless.
(--from Taoism - The Wu-Wei Principle, Part 4, by Ted Kardash
http://www.jadedragon.com/archives/june98/tao.html)

Rowed out and around R2 in the bay outside Camden harbor. Clangers sounding monastic hours in deep reclusive sacred solitude. The joyousness of small boat emptying mind in swell and tide! 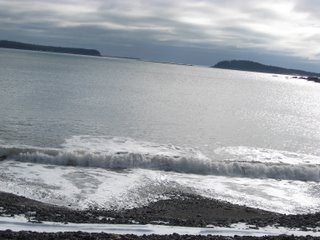 Being hermit in the open is grace enough!