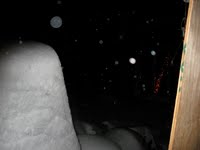 Bless the Lord, my soul!
Lord, my God, how great you are!
You are robed in majesty and splendour;
you are wrapped in light as in a cloak.
(-- from Psalm 103)

No form of itself. Wrapped in light.
As in.
Hence, God is in-visible of itself. 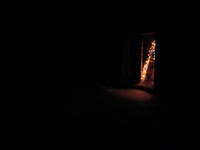 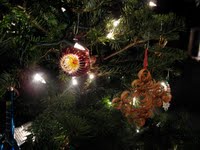 Theres no need to talk about God.

Here is enough. In fact, here is all there is. 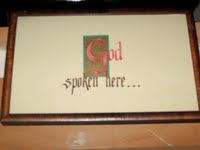 So it is we listen. With silence. And stillness. Sounding itself.
Posted by meetingbrook at 11:16 PM

Everything always is in conversation with everything else.
We're just not paying attention. 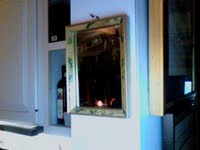 When we do become aware, the conversation becomes vital.
Listen. 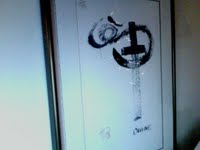 It's a new year. Let's begin again!
Posted by meetingbrook at 10:48 PM

Anyone wish to pray for guidance?

After realizing the intent of Zen, people in ancient times used to spend decades polishing themselves thoroughly in order to free themselves from compulsions of conditioning and habit. This is called the work of maturation; the completion of maturation is called the attainment of unification. - Muso Kokushi (1275-1351) 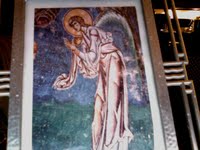 We can choose to see things differently. We can transform, reverse, see truly differently whatever is occuring, has occured, or will be occurring in this perception we call the world. We can choose to live lovingly and compassionately throughout -- that is, in present presence upside down, backwards forward, inside out.

The house didn't burn down tonight. The energy was incendiary finishing with a roar the Epilogues of Course in Miracles. Eggnog sipped. Dog out and back in. We stay up and drain glasses.

Two nothing one nothing.

The message of the angel is: "O neno thi ng. Twono thi ng."

Posted by meetingbrook at 11:59 PM

As the year ends, there is a lot of work to do. First, exit Afghanistan. Second, encourage voluntary poverty. Third, welcome strangers.

-- At least eight Americans died Wednesday in a suicide bombing at a military base in eastern Afghanistan, U.S. officials said. Conflicting reports were reaching the Pentagon on whether the victims were civilian or military in the bombing at Forward Operating Base Chapman in Khost province near the border with Pakistan.

The deaths were confirmed late Wednesday by a U.S. official in the Afghan capital, Kabul.

A senior U.S. official in Washington said the Americans were killed by an attacker wearing a suicide vest.

Another senior U.S. official in Washington said there were conflicting reports on the number of casualties, and that other people were wounded in the attack reported hearing a blast on the base.

All the U.S. officials spoke on condition of anonymity because not all details about the incident had been confirmed.
(-- from The Washington Post.) 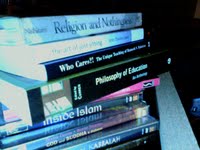 And for three, accept the possibility that everyone is you without your particular ego.

KABUL — A suicide bomber at a base in Afghanistan's volatile east killed eight CIA officers:

The attack is one of the most ambitious of the war, highlighting the insurgency's reach and coordination at a time when violence has reached its highest levels since the overthrow of the Taliban regime by U.S.-backed Afghan forces in 2001.

Reuters reports that the attack on CIA officers is one of the largest death tolls for the U.S. agency. The attack is also one of the worst loss of life for Americans in the country since October. Four Canadian soldiers and a journalist were killed by a roadside bomb in Afghanistan's south, NATO said.

U.S. officials in Washington said the suicide attacker detonated explosives Wednesday at Forward Operating Base Chapman in Khost province near the Afghan border with Pakistan, killing eight American civilians. A congressional official said CIA employees were believed to be among the dead.

"We mourn the loss of life in this attack, and are withholding further details pending notification of next of kin," U.S. State Department spokesman Ian Kelly said. (AP)

The killings must stop.
Posted by meetingbrook at 9:50 PM

Wind chill to minus -18 degrees tonight.
It's cold.

"Do not be attached to the past or wait for the future.
Be grateful for each day, that is enough.
I do not believe in a future world, I deny the past.
I believe entirely in the present.
Employ your entire body and mind in the eternal now."
-Santoka Taneda 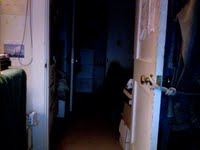 All day I read student's papers.

Sticks by wood stove.
Furnace thinks it can do its job.
Posted by meetingbrook at 8:23 PM

Quantumly, there are myriad ways of seeing an event. Ah, we say, this is a good thing! Or, as likely, we spot something that becomes for us something worrisome and revealing of a dangerous backyard.
The peanut butter and jam on toasted English with cup of yesterday's coffee reheated, is a good morning's treat. There are no guests, so I don't have to make fresh coffee. My tastes are primitive. Anything is good enough.
In the news, more info about the widening gyre of war. We now publicize, thanks to an incident on a plane landing in Detroit, that we are plying war in Yemen. Like buying donuts at Willow Bake Shop, we drop CIA operatives along with mercenary war-for-hire companies, and keep arms merchants in the dough.

By ERIC SCHMITT and ROBERT F. WORTH
Published: December 27, 2009

WASHINGTON — In the midst of two unfinished major wars, the United States has quietly opened a third, largely covert front against Al Qaeda in Yemen.
Yemeni protesters staged a demonstration in the southern part of the country on Thursday after a raid against Qaeda militants.

A year ago, the Central Intelligence Agency sent several of its top field operatives with counterterrorism experience to the country, according a former top agency official. At the same time, some of the most secretive Special Operations commandos have begun training Yemeni security forces in counterterrorism tactics, senior military officers said.

The Pentagon is spending more than $70 million over the next 18 months, and using teams of Special Forces, to train and equip Yemeni military, Interior Ministry and coast guard forces, more than doubling previous military aid levels.

As American investigators sought to corroborate the claims of a 23-year-old Nigerian man that Qaeda leaders in Yemen had trained and equipped him to blow up a Detroit-bound Northwest Airlines jet on Christmas Day, the plot casts a spotlight on the Obama administration’s complicated relationship with Yemen.

The country has long been a refuge for jihadists, in part because Yemen’s government welcomed returning Islamist fighters who had fought in Afghanistan during the 1980s. The Yemen port of Aden was the site of the audacious bombing of the American destroyer Cole in October 2000 by Qaeda militants, which killed 17 sailors.
(--from New York Times, http://www.nytimes.com/2009/12/28/world/middleeast/28yemen.html?hpw)

Donuts are considerably less expensive than the $3,888,888.89 a month or $125,448.03 a day to scope out who to kill, kidnap, or turn to the good guys. It is a complicated world, the rationale goes, and we have to fight against simplicity of thought.

The world, so it seems, is what we make it. We choose what small percentage of any given second or segment we see. We narrate the impressions we receive into a story that fits into our familiar pattern of thought. We place halos around what we call sacred and horns on that which we despise. We are the principle filmmakers of our own personal studios.

And we are frightened by a world of our own making. We blame anything, anyone, for what we see. We grow paranoid and unhappy with the lot we see.

We grow numb, cloistered and claustrophobic, very particular in our opinions and subscribed home front, and we settle in for a long winter's nap. 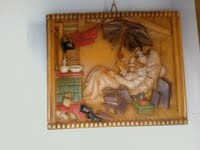 "And I felt it was a matter of personal integrity not to...interfere with it" -- that's what Dr. Helen Schucman said about the communication of A Course in Miracles through her. "It talked about a system I don’t know anything about, and confused me no end. I’m still cross-eyed."

(--audio, The Voice: A Historical Moment with Helen, http://www.acim.org/Scribing/the_voice.html)

As for me, I remain a kid from a Brooklyn street in Bensonhurst. I know stoop-ball and kick-the-can. I know hoops in P.S.205 Night-center and stickball in the schoolyard. We lived sewer to sewer. It was the measure of football toss, punchball hit, and how far Gary and Dominick's houses were from mine. When Anthony across the street was killed in a truck accident on the BQE something about childhood came to a close. Backyards, once the kingdom of a thousand idles, emptied out and all trace disappeared of someone else's footprints in the snow.
The old neighborhood is reconstructed within me. It is not, as the film-maker said on The Problem of God, memory. It is the energy that has comprised my very being coming alive again for a visit.

Sometimes
I catch my mind
circling for you with glazed eye--
my lost love hunting
your lost face.

Summer to summer,
the poplars sere
in the glare--
it's a town for the young,
they break themselves against the surf.

No dog knows my smell.
(--from poem by Robert Lowell - "Homecoming"

Now Yemen is my backyard.

Looking out my first-floor window a half-century gone toward the converted barn against the fence to 70th street -- no dog is chained to the link fence, no old man sits in folding chair smoking a White Owl, and no members of a large household come up stairs from basement or down stairs from back porch.

I look out at the Red Sea, the Gulf of Aden, and the Arabian Sea.

It seems a long way from the clinking glass bottles delivered to morning milk box under storm window.
I'd choose to be the milkman at dawn bringing a simple delight. The milk would be pasteurized, a process reducing the number of viable pathogens likely to cause disease and premature death.
How would you choose to see the world?
Posted by meetingbrook at 1:28 PM

If you wish to know the mind of God, do this: Nothing. 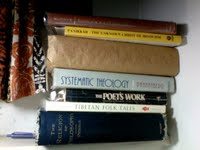 "Having seen that I was not capable of using all my resources in political action, I returned to my literary activity. There lay the battlefield suited to my temperament. I wanted to make my novels the extension of my own father's struggle for liberty. But gradually, as I kept deepening my responsibility as a writer, the human problem came to overshadow political and social questions. All the political, social, and economic improvements, all the technical progress cannot have any regenerating significance, so long as our inner life remains as it is at present. The more the intelligence unveils and violates the secrets of Nature, he more the danger increases and the heart shrinks."