Sun brightens white on Bald Mountain this latest snow in spring as March prepares to step off calendar. Puffs of white snowy breath blow from firs partially up slope. Everything has slowed within. Each branch holds white extending bouquet of gathered flakes to air looping through pass between two mountains. Cars ride road to Snow Bowl's final weekend of skiing, tubing, and snowboarding. I've no desire to go anywhere. Where is there to go?

The entire universe is one bright pearl.
When the right time comes,
The essence of the bright pearl can be grasped;
It is suspended in emptiness,
Hidden in the lining of clothes,
Found under the chin of dragons
And in the headdresses of kings.
This pearl is always inside our clothing,
That is, inside us, our real nature.
Do not think about putting it on the surface;
Is should be kept in headdresses and under jaws.
Never attempt to wear it on the surface.

Woman writes from Manhattan saying she walks to past haunts along city's streets; the first time in 34 years, she says, amazing to be here, or anywhere, with no "hafta be back." or for that matter, no "hafta do" anything.
Snow, Aldo

Once, I was in New York,
in Central Park, and I saw
an old man in a black overcoat walking
a black dog. This was springtime
and the trees were still
bare and the sky was
gray and low and it began, suddenly,
to snow:
big fat flakes
that twirled and landed on the
black of the man's overcoat and
the black dog's fur. The dog
lifted his face and stared
up at the sky. The man looked
up, too. "Snow, Aldo," he said to the dog,
"snow." And he laughed.
The dog looked
at him and wagged his tail.

If I was in charge of making
snow globes, this is what I would put inside:
the old man in the black overcoat,
the black dog,
two friends with their faces turned up to the sky
as if they were receiving a blessing,
as if they were being blessed together
by something
as simple as snow
in March. 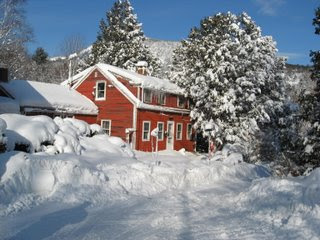 Fifteen years ago looking across at Bald I saw a herd of deer single file traversing the mountain through deep snow. Those gathered in front room marveled at the passage. One by one over the years many have been caught by cars while crossing Barnestown Road between Bald and Ragged. Often luck has kept one from leaping in front of my car -- some have -- but like a dream in twilight made me wonder what had gone by ghostlike to safety.

Watching Bush's War on Frontline offers similar feeling -- what has gone by? Lingering incomprehension as to whether what has been done occurred out of intentional malfeasance or ignorant ineptitude. Also hard to comprehend is the pass given to the perpetrators of such a disastrous misadventure. My departed friend Richard would frown on what he called "going political" in this space. (I miss his chide.)

Essay on the Personal

Because finally the personal
is all that matters,
we spend years describing stones,
chairs, abandoned farmhouses—
until we're ready. Always
it's a matter of precision,
what it feels like
to kiss someone or to walk
out the door. How good it was
to practice on stones
which were things we could love
without weeping over. How good
someone else abandoned the farmhouse,
bankrupt and desperate.
Now we can bring a fine edge
to our parents. We can hold hurt
up to the sun for examination.
But just when we think we have it,
the personal goes the way of
belief. What seemed so deep
begins to seem naive, something
that could be trusted
because we hadn't read Plato
or held two contradictory ideas
or women in the same day.
Love, then, becomes an old movie.
Loss seems so common
it belongs to the air,
to breath itself, anyone's.
We're left with style, a particular
way of standing and saying,
the idiosyncratic look
at the frown which means nothing
until we say it does. Years later,
long after we believed it peculiar
to ourselves, we return to love.
We return to everything
strange, inchoate, like living
with someone, like living alone,
settling for the partial, the almost
satisfactory sense of it.
(--Poem by Stephen Dunn)

This Saturday.
Posted by meetingbrook at 9:41 AM

Cat wants out. Or food. Or loads himself on chest, against arm, nuzzling neck. He's been appendage for two days. Then again, puppy is away. Insistence has its consequences.

Kuei-shan was asked, “Is there any further cultivation for people who have suddenly awakened?”
He replied, “If they awaken truly, realizing the fundamental, they know instinctively when it happens. The question of cultivation or not is two-sided. Suppose beginners have conditionally attained a moment of sudden awakening to inherent truth, but there are still longstanding habit energies that cannot as yet be cleared all at once? They must be taught to clear away streams of consciousness manifesting habitual activity. That is cultivation, but there cannot be a particular doctrine to have them practice or devote themselves to.
- Kuei-Shan (771-854)

Thinking back about insistence of war merchants to rearrange Middle East in our image depresses. Those in power now have near unlimited permission to act however they wish.

In the shop the Vietnam war is still being fought by those who were there. Air Force, Navy, Intelligence, and Spectators have at the war and each other. Swift Boaters boast blows to Kerry while medics realize a different anguish. Many wars are re-fought -- WWII, Korea, Vietnam, Desert Storm, and Current Fiasco -- all by people who've either been there or have had family there. Afghanistan and Iraq will have to wait. Kennedy, Nixon, and Johnson are still debated around the fireplace. Bush and Cheney are too fresh to have any perspective on them -- rather, raw feelings and intense mistrust cloud any clear assessment of their 8 years. 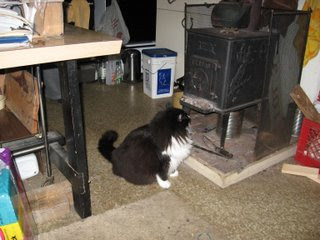 Technique of non-reaction
Shantideva mentions specific instances when it is advisable to remain like a mindless piece of wood. We can do this when our mind is very distracted or when the thought arises to belittle, slander, or abuse others. If pride, haughtiness or the intention to find fault with others arises, we can also remain impassive until our deluded motivation fades. Feeling pretentious, thinking to deceive others and wishing to praise our own qualities, wealth, or possessions are all occasions when it is wise to pretend that we are made out of wood. Whenever we have the desire to blame others, speak harshly or cause disruption we should practice this technique of non-reaction.
(- Geshe Kelsang Gyatso, Meaningful to Behold, from Everyday Mind, a Tricycle book edited by Jean Smith)

Wood goes into stove for burning. It snowed today. Everything white again. Ice from ceder tree falls on skylight.

Lastly, he showed himself to the Eleven themselves while they were at table. He reproached them for their incredulity and obstinacy, because they had refused to believe those who had seen him after he had risen. And he said to them, ‘Go out to the whole world; proclaim the Good News to all creation.
(--Mark 16: 14-15, from Easter Saturday)

Life goes on.
Posted by meetingbrook at 11:29 PM

Odd thing is it's as though a hard drive has been wiped clean.

For twenty seven years
I’ve always sought the Way.
Well, this morning we passed
Like strangers on the road.
- Kokuin (10th century)

And what remains is only what is. 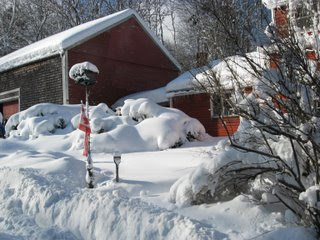 Nothing fits anywhere but within itself.

No grievance. Only oddly familiar.
Posted by meetingbrook at 9:26 PM

I've been thinking about what hito (hermit in the open) means.

My hut lies in the middle of a dense forest;
Every year the green ivy grows longer.
No news of the affairs of men,
Only the occasional song of a woodcutter.
The sun shines and I mend my robe;
When the moon comes out I read Buddhist poems.
I have nothing to report my friends.
If you want to find the meaning, stop chasing after
so many things.
--Ryokan

Do I think it is possible to be a hermit in the open?

"A poem begins with a lump in the throat; a homesickness or a love-sickness. It is a reaching out toward expression, an effort to find fulfillment. A complete poem is one where an emotion has found its thought and the thought has found the word."

And, "In three words I can sum up everything I've learned about life: it goes on." 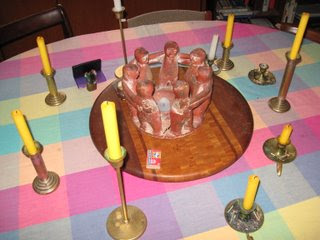 The German monk in the retreat house kitchen asked a third time, then listened to my response about hito. He looked at me.

His expression was intent.

There's a thin line between everything said and unsaid.

I'm not sure which side to come down on.

Perhaps that thin line is all there is.

No sides.
Posted by meetingbrook at 10:36 PM

("Stand around" is what the word "circumstance" means.)

Every place I look, there I am.

Is there any remaining need to believe what any one else believes with regard to what is God, or Christ, or enlightenment, or truth? If there is anything to what stands around, then see for yourself -- or perhaps, more to the point, see yourself.

“Sages since time immemorial have only explained the problems of pollution. If one does not have all that false consciousness, emotional and intellectual opinionatedness, and conceptual habituation, one is clear as autumn water, pure and uncontrived, placid and uninhibited. Such people are called Wayfarers, or free people.”
- Kuei-Shan (771-854)

A wayfarer is one traveling as one stands around.

Ortega y Gasset's well-known definition of Man -- Yo soy yo y mi circunstancia, "I am myself and my environment" -- should be understood as a strict anthropological statement. The environment belongs to me and not only influences me, but is part and parcel of my self, even if not exhaustively so.

Not only time and space in general, but concrete temporal and spatial things condition my life and my Being; they are part of my life and my Being. Not only do my friends and the people I live and talk with reveal me and shape me, but the world around me conditions me and is me, as well. I am as much a passive element as an active factor. Our Being is not what we often call our individuality. (--p.146, Epilogue, Aspects of a Cosmotheandric Spirituality, in The Cosmotheandric Experience, Emerging Religious Consciousness, by Raimon Panikkar, c.1993)

The more I stand around the more I wonder. If someone speaks your true name, turn around.

Listen to the voice of the one speaking it -- so very few know it.

All around you stands what is needed to hear.

And well for you!
Posted by meetingbrook at 3:48 PM

Good Friday
"...in truth you never lose what you always are." --Adyashanti

Stiff chill wind. This death --
Listen here -- no other way
to utter silence

This one the final...
moon clear over steeple -- Christ,
if we change our minds

Stark, crow on balsam --
taken away belief that
not all intersects

Morning light -- can you
allow dawn, dusk -- interstice;
turn around, go on...