His smile reaches us
through photo there --
sun glints off snow
facing us . . . here

“abortive offspring of the unthought rational”


We spoke of Nietzsche Friday night.


Occasionally we still have the feeling that violence has long been done to the thingly element of things and that thought has played a part in this violence, for which reason people disavow thought instead of taking pains to make it more thoughtful. But in defining the essence of the thing, what is the use of a feeling, however certain, if thought alone has the right to speak here? Perhaps, however, what we call feeling or mood, here and in similar instances, is more reasonable—that is, more intelligently perceptive—because more open to Being than all that reason which, having meanwhile become ratio, was misinterpreted as being rational. The hankering after the irrational, as abortive offspring of the unthought rational, therewith performed a curious service. To be sure, the current thing-concept always fits each thing. Nevertheless, it does not lay hold of things as it is in its own being, but makes an assault upon it.” (pp. 150-151, Martin Heidegger, in What is Called Thinking)

At memorial service thursday for Jim’s brother Tony, the pastor commented that so many people today are bible-illiterate. It was a soft jab.

Sitting is back pew I thought: Nope, I’m bible-illiteral.

Posted by meetingbrook at 11:19 AM

here of a friday morning


Emptiness intersecting nothing there.

Thomas Merton felt the Celtic cross a reflection of it.

Nothing there is here diaphaneity.


Posted by meetingbrook at 6:41 AM

another taxi will come along


He suffers from hope. He thinks someone will help him in the craziness of prison life. He doesn’t feel he belongs there. An insane place. Cruel uncaring people. “Help or go back to your spiritual dope.”

He’s right. Which brings little joy. Being right. When everything is wrong. Try again. No hope from dope.


Via Negitiva: A way of describing something by saying what it is not, especially denying that any finite concept of attribute can be identified with or used of God or ultimate reality. 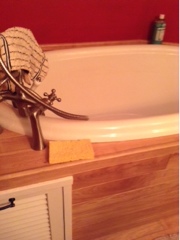 
Walter White told his wife in Breaking Bad he did it for himself. He was good at it. He liked it. He felt alive.

We should all be so lucky.

Still, his story is not without its massive complications.


WARREN — The death of inmate Micah Boland Friday evening at the Maine State Prison in Warren has been classified as a homicide, according to the Office of the Chief Medical Examiner. http://knox.villagesoup.com/p/inmate-death-ruled-a-homicide/1135798

When I walked through crosswalks between prison industries and cellblocks hours earlier that morning had he seen me, had I seen him?

What was he good at? What did he like? Did he feel alive those final few hours?

Like the dawn leaving my first hospice midnight to 7am sitting vigil with the dying musician many years before, when to buy a cup of coffee and donut in streaming sunlight felt like the most liberating gift ever -- I returned to the same place by the pond, filled paper cup with coffee, took two donuts in brown bag, and sat in car across from Habitat for Humanity just looking out at what is good, what is liked, and what feels alive.

It’s all about complications -- isn’t it?

Posted by meetingbrook at 1:55 PM

Seeing and hearing
what really is --

nothing
no more
Posted by meetingbrook at 11:11 PM

Here's your hat, there's the door; what's your hurry?

U.S. left some baggage behind in Iraq after it's long visit.

God left by back broken door his visit with humanity. 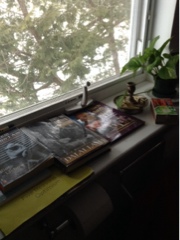 Let's see -- where's my walking stick?
Posted by meetingbrook at 9:27 AM