the one you are, with

The workman sat quietly a brief while, then said, "It is beyond me."


We'd been talking about the vast distance across our galaxy (100,000-120,000 light years across), the speed of light being about 186,282 miles per second, there being in the Milky Way galaxy somewhere between 100-400 billion stars, with our neighboring Andromeda Galaxy containing an estimated one trillion (1012) stars, there being approximately 100-500 billion galaxies in the universe.

I tell him that the ability to speak that phrase is itself marvelous. More than that his phrase, as language, contains in four words the great mystery of the universe.

Acknowledging scientific existence -- It is. 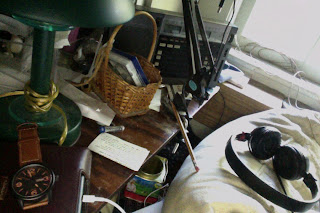 At Friday Evening Conversation eight of us considered depression, witnessing, and fallout from failures.

And this "with" is not two, nor one: it is bewithing.

Being-with is beyond one being with another being.

It is the unknowable and incalculable 'between' that occurs when one is with another.

Call it, if you wish, mitversation. It is that which occurs when one turns to and with another in the movement of grace engaging what is to be.

This 'grace engaging what is to be' is the triadic trinitarian interplay of Beyond, Between, Becoming.

What we call 'God' is the one you are with.

Gracias!
Posted by meetingbrook at 5:15 PM

What is beyond religions and philosophies?

"Truth is a pathless land," said Krishnamurti.
Posted by meetingbrook at 3:46 PM

look all you want, there's

I shall be there as who I am shall I be there. 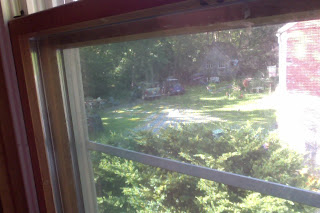 Good to know!
Posted by meetingbrook at 8:01 AM

Away.
Posted by meetingbrook at 3:30 PM

watching nothing through what is there

The sign of light through blinds is early invitation to see. 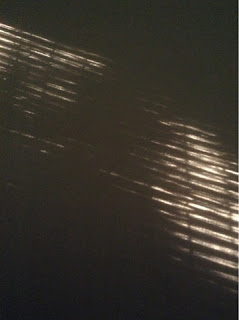 “Our entire life, the whole liturgy, and everything ceremonial are symbols. If you abolish the symbols, then you tear down the walls of your own house. When we abolish the signs, we lose our orientation. Instead, we should search for their meaning … one should unfold the core of the symbols. … The signs are not to be questioned, we are.”


Vision is silence making its way through an open heart.

Schweig, sei still! Frieden erklären!
(Be silent, be still! Declare peace!)
Posted by meetingbrook at 6:07 AM

seeing through a lens

#5 haikuSwimming in tree, fishconsiders canopy -- yes --nothing else buoys up


"Are you ready to adopt our monastic way of life as the way through which God will lead your souls to the inner holiness where He will reveal his existence to you and let you commune with Him?

They say they will do their best with assistance from their brothers. 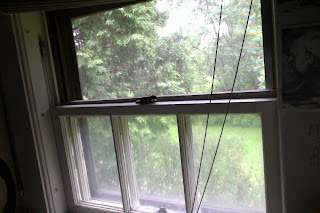 Community that prays for one another is salvation of world.

Saved from or saved for is irrelevant. 'Salvation' in itself


Salvation (Latin salvatio; Greek sōtēria; Hebrew yeshu'ah) is being saved or protected from harm or being saved or delivered from some dire situation. In religion, salvation is stated as the saving of the soul from sin and its consequences. (Wikipedia)


Soteriology (Greek σωτηρία sōtēria "salvation" from σωτήρ sōtēr "savior, preserver" + λόγος logos "study" or "word"[1]) is the study of religious doctrines of salvation. Salvation theory occupies a place of special significance and importance in many religions.   In the academic field of  religious studies, soteriology is understood by scholars as signifying a key theme in a number of different religions and is often studied in a comparative context; that is, comparing various ideas about what salvation is and how it is obtained.  (Wikipedia)

Back to Carthusian monasticism, nothing is said of salvation in the question. The interest is in inner holiness, revealing, and communing.

Letting each speak for itself.

Presence preserved for only now.

If you long for this, obtain it in silence, prayer of infinite eternal holiness within what is now being revealed as itself communing!
Posted by meetingbrook at 12:40 PM

The German shepherd comes upstairs at 4am. He wants out. We go out. He runs up path and ... What wanted out explodes out. The air is reordering itself. The ground begins its absorbtion. He comes back. Leans against me. We come back in through barn. I give him and white dog biscuit.
I think that's the way it is meant to work. And it did.
Birds begin choral sound check.
Posted by meetingbrook at 5:02 AM

Some people are smarter and luckier than the rest of us. They are richer. Sometimes they work harder.  Their yield seems effortless.

Then there are those of us who're not so smart, not so lucky, poorer, not ambitious, whose effort is without yield.

There's nothing to it.

Posted by meetingbrook at 9:26 PM


In phone call from prison I am asked about Trayvon Martin matter. It is a long conversation. Obama's personal contribution, nationwide rallies, looking at laws that intend to strengthen ability to defend but also raise loophole for shoot-the-one-you-dislike by claiming to be afraid of them.

By third callback I am ready to propose my solution. Something Gary David Goldberg in his book Sit, Ubu, Sit said about Steven Spielberg, namely, "OK, I get it. This guy's just smarter than the rest of us."

All that is done, finished, over.

Only . . . we're asleep to this realization. We do not yet understand that the old ways are dead.

Intensely shared reality (like 9/11) empties us into instantaneous cooperative feeling behavior. Then, just as the smoke is clearing, those with divisive agendas advance conceptual solutions that insinuate into vulnerable psyches, and felt solidarity is morphed into ideological separation serving someone's hungry ghosts grasping for profit and power.

What then? What now? What's coming? What's to be? 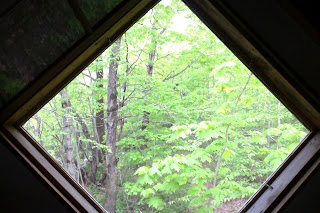 We've said all the words possible to be said in the old conversation.

It is mitversation. I want it to mean "to turn with."

("Mit" in German, translates 'with.')
("Verso, versare, versavi, versatum," in Latin, translates "to turn, to turn around.")

Mitversation is turning with others or another within a commonly experienced reality that both find exigent needing healing and whole-making response.

Once this word took shape I researched its provenance. I found it, alone, in a Samuel Johnson 18th century letter:


" TO BENNET LANGTON, ESQ. OF TRINITY COLLEGE,
OXFORD.
" DEAR SIR,
" Though I might have expected to hear from
sou, upon your entrance into a new state of life at a
new place, yet recollecting, (not without some degree
of shame,} that I owe you a letter upon an old account,
1 think it my part to write first. This, indeed, 1 do
not only from complaisance but from interest ; for liv-
ing on in the old way, I am very glad of a correspond-
3 " Mr. Langton."
" " Part of the impression of the Shakspeare, which Dr. Johnson conducted alone.
and published by subscription. This edition came out ia 1765."
DR. JOHNSON. 263
ent so capable as yourself, to diversify the hours. You 1758.1
have, at present, too many novelties about you to need ^£ut!
any help from me to drive along your time. 49.
" 1 know not any thing more pleasant, or more in-
structive, than to compare experience with expectation,
or to register from time to time the difference between
idea and reality. It is by this kind of observation that
we grow daily less liable to be disappointed. You,
who are very capable of anticipating futurity, and rais-
ing phantoms before your own eyes, must often have
imagined to yourself an academical life, and have con-
ceived what would be the manners, the views, and the
Mitversation, of men devoted to letters ; how they
would choose their companions, how they would direct
their studies, and how they would regulate their lives.
Let me know what you expected, and what you have
found. At least record it to yourself before custom
has reconciled you to the scenes before you, and the
disparity of your discoveries to your hopes has vanished
from your mind. It is a rule never to be forgotten,
that whatever strikes stron^'lv, should be described
while the first impression remains fresh upon the mind.
" I love, dear Sir, to think on you, and therefore,
should willingly write more to you, but that the post
will not now eive me leave to do more than send mv
compliments to Mr. Warton, and tell you that I am,
dear Sir, most affectionately,
" Your very humble servant,
" June 2S, 17-58. - Sam. Johnson."

Perhaps we remain asleep to our wider cache of companions in this world at this time when divisions and cultivation of division for profit or power has become lethal sport. We are no longer innocent entrepreneurs of self-aggrandizement and Damon Runyon jackpots that leave us beyond the hoi polloi -- the ordinary suckers we are better than, those who should be doing our bidding. That thinking and using of others for our benefit is cancerous. There is a cure.

The cure is care.

And strongly consider, and undertake, mitversational companioning -- the first impression of compassionate communion response to one another.

If, as Heidegger says, language is the house of Being, then "mitversation" is a new window to look through.

Posted by meetingbrook at 2:48 PM

Sun rises. Of that there is daily experience. Coo-birds from field, chickadee in branch, nuthatch scaling tone. It is enough to wake with these sounds, without need to hear the serrated phrasing of preachers and dharma teachers try to surround the unsayable with phonemes and phantasmagoria.

Earth itself is enough. Ground water air and fire. Dew on grass. Mist on mountain. Fog on ocean. The human voice is becoming questionable now that it is unwilling to question the words and actions it sees and hears everyday from disreputable and callous charlatans.

In the dream a man is wearing brown, pax et bonum, knowing he is imposturing, wandering field.

No one belongs where they are. Everyone borrows name, face, feet, and feeling. The aggregate swirling forces seem to sketch a narrative mind grabs as it formulates and signs declarative documents -- "Yes, he was born here and then went on to there with that name doing these things."

We are a series of events and experiences that get sold for salary to assist others to make money to buy transportation to move furniture to sleep at night to eat through day to keep on going selling self for recognition and perpetuation -- sometimes helping the help-needing make things less awful, less discouraging, less humiliating. Helping to make the passage with a little grace, a little dignity, a smidgen of simple gratitude. 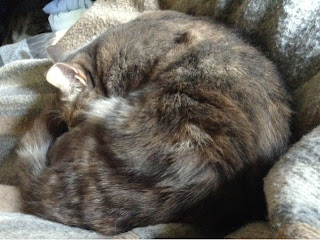 One long line of twitching syllables without fixed meter or rhyme stopping suddenly. 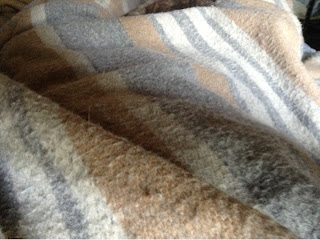 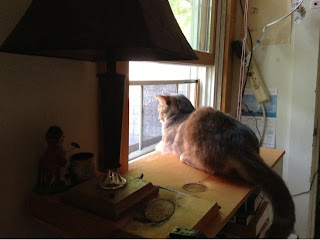 Posted by meetingbrook at 7:13 AM