saying it becomes it

Transitus --
Il poverello of Assisi,
fell asleep in God, they say --
Transitioning into these words;
language a new form of life
Posted by meetingbrook at 10:30 PM

and what is today's practice?

Doctors Without Borders hospital hit by US drone in Afghanistan. Many killed and injured.

Nine shot to death on college campus in Oregon.

Ship with two dozen crew lost in waters under hurricane off Bermuda.

I too will die.

Watchfulness and the practice of the art of attention, nepsis and prosoche. These are good words to name a new rowing dinghy if one were to name such a boat what one’s life (sei ikiru) presents itself as come  October.


For the ancient fathers, a basic prerequisite for genuine growth in the spiritual life involves a constant attitude of nepsis or watchfulness.  The word nepsis (νήψις)in antiquity literally meant to drink no wine, but by extension it also included the metaphorical sense of being sober-minded, sane, alert, and finally vigilant.  If one desires to not be under the influence of the passions, if one wishes to not be drunk with anger, with envy, or with desire, one must spiritually speaking drink no wine. The ascetic fathers are also referred to as the neptic fathers. This watchfulness is paramount because as Saint Peter warns in his epistle, “Be sober (νήψατε), be vigilant (γρηγορήσατε meaning stay awake); because your adversary the devil, as a roaring lion, walketh about, seeking whom he may devour.”  If you are drunk or asleep, you are obviously defenseless in the face of an attack.

In chapter eight of Ancient Christian Wisdom, I note that Saint Hesychius the Presbyter distinguishes between four types of watchfulness or of not drinking the fermented juices of the passions: (1) calling out to Christ for help, (2) remaining silent and still in prayer, (3) ruminating on the thought of death, and (4) scrutinizing the thoughts of fanciful notions.
(--from, The Therapeutic Strategy of Nepsis, in, Ancient Christian Wisdom), http://ancientchristianwisdom.com/2012/11/06/the-therapeutic-strategy-of-nepsis/

“We are poor passing facts” wrote Robert Lowell in his poem Epilogue, “warned by that to give / each figure in the photograph / his living name

The non-dualist elements in Stoicism appear to be primarily related to the prevalence of spiritual exercises in Hellenistic philosophy in general, of which [Pierre] Hadot gives a detailed account. Important among these exercises as they appeared in Stoicism was prosoche or mindfulness, preparation for death, and the flight of the soul, all of which can suggest a non- dualist perspective.
Prosoche seems to have been very similar to the Buddhist practice of mindfulness (sati) (though not nearly so fully developed), involving a deliberate and systematic cultivation of awareness of the present moment. Hadot quotes from Marcus Aurelius:

Everywhere and at all times, it is up to you to rejoice piously at what is occurring at the present moment, to conduct yourself with justice towards the people who are present here and now, and to apply rules of discernment to your present representations, so that nothing slips in that is not objective.1


Hadot goes on to explain the ways in which prosoche is a fundamental preparation for other practices: it frees us from passions associated with the past or future, increases vigilance, and “allows us to accede to cosmic consciousness”2. As I shall argue later, this type of practice may work on a psychological level to reduce identification with the ego, provided it is performed in a balanced fashion, avoiding alienation3: but it is impossible to tell from purely textual or historical evidence whether or not this was the case.

What are we looking at? Looking for? Looking as?

I’m waiting for you to answer me.

Angels help us! Keep us safe along this inquiry!
Posted by meetingbrook at 7:01 AM

a good universe next door?

Philosophy entails questioning what we don’t know to see if there is any confession forthcoming.

Such as -- I don’t know this, but I learned something yesterday that suggests this is that.

Nietzsche writes under the heading “Types of my disciples”:

To those human beings who are of any concern to me I wish suffering, desolation, sickness, ill-treatment, indignities — I wish that they should not remain unfamiliar with profound self-contempt, the torture of self-mistrust, the wretchedness of the vanquished: I have no pity for them, because I wish them the only thing that can prove today whether one is worth anything or not — that one endures.

William Faulkner, in his Nobel Prize for Literature in 1949 made these comments at his Banquet Speech (1950):

He must learn them again. He must teach himself that the basest of all things is to be afraid; and, teaching himself that, forget it forever, leaving no room in his workshop for anything but the old verities and truths of the heart, the old universal truths lacking which any story is ephemeral and doomed - love and honor and pity and pride and compassion and sacrifice. Until he does so, he labors under a curse. He writes not of love but of lust, of defeats in which nobody loses anything of value, of victories without hope and, worst of all, without pity or compassion. His griefs grieve on no universal bones, leaving no scars. He writes not of the heart but of the glands.

Until he relearns these things, he will write as though he stood among and watched the end of man. I decline to accept the end of man. It is easy enough to say that man is immortal simply because he will endure: that when the last dingdong of doom has clanged and faded from the last worthless rock hanging tideless in the last red and dying evening, that even then there will still be one more sound: that of his puny inexhaustible voice, still talking.

I listen to Vladimir Putin speak about Libya and Iraq falling apart after their strongmen leaders were toppled. He says this should not happen in Syria, where a massive proxy war rages.

The United States feels like the Republican right wing Congress in its efforts to dismantle governance in favor of private capitalist corporate grabfests. Russia wants Bashar al-Assad to stay in place. It is hard to imagine what will happen next in Syria, in Palestine, in Iraq, in Afghanistan, in Yemen, in the halls of Congress.

The solution proposed by Congress seems to be to destroy Planned Parenthood and women’s health opportunities so that...so that...er...so that women would not take away the presumed right of men to control women’s bodies. If men can continue to do that, then the Middle East will be safe for...for...ah...men to control women. (Logic demands we arrive carefully at reasonable conclusions to  rational problems. Women, apparently, are rational problems for Republican men.)

One could say that in case of need, every normal and healthy woman is able to hold a position. And there is no profession which cannot be practiced by a woman. (--Edith Stein)

What do Republican men need?

What profession do they prefer women to practice?

What, beside embarrassment and disgust, can one think about the congressional hearings by
the House Committee on Oversight and Government Reform and their questioning of CEO Cecile Richards?  http://www.npr.org/sections/thetwo-way/2015/09/29/444528541/6-clips-of-audio-you-should-hear-from-the-planned-parenthood-hearing

Cheer up. There are antidotes.

One of them is poet e.e.cummings.

not. Progress is a comfortable disease:
your victim (death and life safely beyond)

plays with the bigness of his littleness
--- electrons deify one razorblade
into a mountainrange; lenses extend
unwish through curving wherewhen till unwish
returns on its unself.
A world of made
is not a world of born --- pity poor flesh

and trees, poor stars and stones, but never this
fine specimen of hypermagical

a hopeless case if --- listen: there's a hell
of a good universe next door; let's go

Something there is about Angels.

The Catechism of the Catholic Church tells us, “…the whole life of the Church benefits from the mysterious and powerful help of angels.” John Paul II, in a General Audience, reminds us that the name of each Archangel reflects a facet of the nature of God. St. Michael’s name means ‘Who is like God?,’ St. Gabriel’s ‘power of God,’ and St. Raphael’s ‘God heals.’ To angels, God has entrusted a special mission with human beings at the center.

If God is the hidden power of love, and Angels are the unseen conveyance of caring, then...I'm good with God and Angels.

neither rhyme nor reason

something calls from high in tree

No, not true. This window

View of everything out there 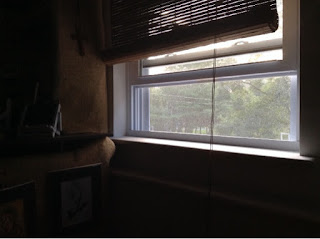 When all have gone. 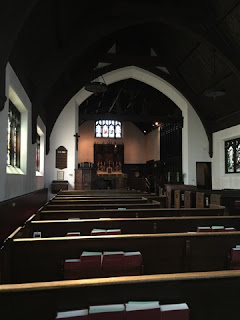 Pope arrives.
Pope departs.
Just like you. Just like me.
He says: be faithful, generous, and kind.
We say: we will, some day.
We will.
Pray.
Posted by meetingbrook at 11:12 AM