Each light year is 9.5 trillion kilometres.

The Carina Nebula is 7500 light-years from earth. The length of the pictured cloud is 3 light-years.

Hubble's first images since servicing Mission 4. WFC3 visible image of the Carina Nebula. Composed of gas and dust, the pictured pillar resides in a tempestuous stellar nursery called the Carina Nebula, located 7500 light-years away in the southern constellation of Carina. Taken in visible light, the image shows the tip of the three-light-year-long pillar, bathed in the glow of light from hot, massive stars off the top of the image.

I am correspondingly silenced.

Still, what I am is what it is.

I learned the three virtues from my teacher

And watch the grass in the wind

When I brood all alone

In the desolate hermitage,

I realize I have lived many

Lives as a monk.

What they said the universe echoed: we are in this expanse called love and commit ourselves to it.

We had, back home, tapioca chocolate pudding while rooting for the visitors from space.

Posted by meetingbrook at 10:59 PM

Everyone lies. It's what the ego does to protect the ego. It's not a surprise and might not be the major problem that we tell ourselves and therefore others lies.

The problem is when we believe the lies we tell. It would be more useful if we simply recognized the lies as they arise in us and make the decision not to believe or perpetuate the lie.

Enchanted by the name of the mountain,
I decide to climb it with a stick in my hand.
A glimpse of the real mountain:
Clouds float by, waters flow as they will.
- Hueng Powoo (d.1565)

The time arrives when I no longer believe anything said by someone in power. I just recognize that what is said is something worth my skepticism, reason, and deliberation. It does not get my belief.

Nor am I cynical. Just unbelieving. I recognize that the vast majority of what is said is said with a motive that is not merely the bare truth.

The source of truth is available to everyone. The source flows throughout. That's the sentence Saskia spoke at final circle this morning. In prison today the men in conversation said they were cautious about receiving any story. Is there an agenda-less story?

The source runs right through each one of us.

Tell no stories without their origins.

Be source flowing throughout.
Posted by meetingbrook at 10:41 PM

"My brother is guiltless." That's what the text in ACIM says. There is nothing but the first. One. No two. Nothing to follow and divide. Nothing separate.

"Where there is no love, put love, and you will find love."
(St. John of the Cross)

But of course things are separate. As are egos convinced their way is best. The course wants us to consider that only the Holy Spirit is joyous. The ego courts a wide range of diverting emotions, but the Spirit extends joy alone.

"I follow the Way of Love. Wherever love's caravan rests, that is my religion, my faith." (Ibn 'Arabi)

One year ago today and tomorrow we were in the throes of packing up and moving from the in-town bookshop & bakery. We were out at 2am the 1st of May. Now this building is built, books unloading box by box after a year's sequester.

The Afterlife: Letter to Sam Hamill

You may think it strange, Sam, that I'm writing
a letter in these circumstances. I thought
it strange too—the first time. But there's
a misconception I was laboring under, and you
are too, viz. that the imagination in your
vicinity is free and powerful. After all,
you say, you've been creating yourself all
along imaginatively. You imagine yourself
playing golf or hiking in the Olympics or
writing a poem and then it becomes true.
But you still have to do it, you have to exert
yourself, will, courage, whatever you've got, you're
mired in the unimaginative. Here I imagine a letter
and it's written. Takes about two-fifths of a
second, your time. Hell, this is heaven, man.
I can deluge Congress with letters telling
every one of those mendacious sons of bitches
exactly what he or she is, in maybe about
half an hour. In spite of your Buddhist
proclivities, when you imagine bliss
you still must struggle to get there. By the way
the Buddha has his place across town on
Elysian Drive. We call him Bud. He's lost weight
and got new dentures, and he looks a hell of a
lot better than he used to. He always carries
a jumping jack with him everywhere just
for contemplation, but he doesn't make it
jump. He only looks at it. Meanwhile Sidney
and Dizzy, Uncle Ben and Papa Yancey, are
over by Sylvester's Grot making the sweetest,
cheerfulest blues you ever heard. The air,
so called, is full of it. Poems are fluttering
everywhere like seed from a cottonwood tree.
Sam, the remarkable truth is I can do any
fucking thing I want. Speaking of which
there's this dazzling young Naomi who
wiped out on I-80 just west of Truckee
last winter, and I think this is the moment
for me to go and pay her my respects.
Don't go way. I'll be right back.

What's interesting about pain and discomfort is the suspicion that it is the beginning of the end of life. It feels that way. It nearly always goes away. But it will be that one time it settles in for the long haul. It's why solitude is refreshing. No one to say "It's ok," or, "Maybe today." There's enough uncertainty in an hour. 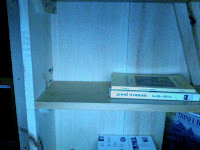 I remember walking Fairmount Park along the Wissahickon in Northwest Philadelphia early spring one year. Runners and cyclists went by.

It's what time does.
Posted by meetingbrook at 10:08 PM

They teach best who've nothing to teach.

Knowledge comes from acquiring and grasping facts. Wisdom comes from reflecting on and digesting experiences, learning their lessons, gaining insights and developing guiding life-principles. The 11th century Islamic poet and philosopher Ibn Gabriol says: "In seeking wisdom, the first step is silence, the second listening, the third remembering, the fourth practicing, the fifth -- teaching others."
http://www.huffingtonpost.com/lama-surya-das/spiritual-life-wisdom-an_b_552927.html

At class tonight we talked about the cosmos, sex education, and aesthetics. We liked the poem by W.S. Merwin:

To become unstuck. To be unhooked. To learn to wait.

I learned the three virtues from my teacher
And watch the grass in the wind
To know Buddha nature.
When I brood all alone
In the desolate hermitage,
I realize I have lived many
Lives as a monk.
- Hueng Powoo (d.1565)

Needed.
My dog looks at everything.
Nothing escapes his gaze.
Posted by meetingbrook at 11:28 PM

I hope Arizona changes its mind about the new immigration law.
I anticipate being rounded up some day as being from an alien dimension dropped here to earth without proper documentation. Sure, the hospital my mother took me home from says I was born from her (Thank you, mom) and was therefore a legal birth (Thanks, Dad) legitimized by state and church (Thanks NY and St Athanasius Parish) therefore heir to all the demands and benefits (Thanks IRS and FDR) of this fine land. But, really, does anyone know exactly where I came from prior to the in-utero razzamatazz featured in National Geographic and Biology 101?

Without clothes, without body, without name, and without privilege, what is it we expect God to be?

Nothing there. No documents. No permits. No green card. No fixed home.

When they arrest me they will have to arrest the nameless, bodiless, placeless Spirit that holds me in being and enlivens my very legitimate-less self.

Mark me well -- it is disconcerting to know that every church and mosque, temple and chapel will be turned over to the men on Wall Street who are betting short that God has been de-legitimized and de-commissioned and frocked with bright orange waiting to be sent to the holding tank of the People-In-Charge. 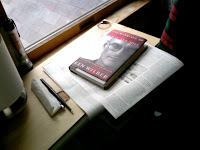 "The modern West is actually an intense combination of good news, bad news. The self or subject of rationality was deeper than the subject or self of mythology (...) However -- solely because of the collapse of the Kosmos -- the object of rationality (which was confined to sensorimotor flatland) was much less deep than the object of mythology (which was the Divine order, however crudely or anthropomorphically depicted). Thus, a much deeper subject confined its attention to a much shallower object. And there, in a nutshell, the combination of dignity and disaster that is the paradox of modernity: a deeper subject in a shallower world."
(--Ken Wilber, in The Marriage of Sense and Soul , p. 206)

It is a shallow deliberation trying to figure the worthiness and acceptability of human beings.

I've an idea: Let's start all over.

Now if only someone could make the determination where we'd start again, and who'd be allowed to start again, and how long anyone'd be permitted to continue in that place -- we'd all be grateful. Because, as you know, because we've been told, there's not enough room, money, food, or will to ensure everyone a basic, common, satisfactory life with the benefit of health care and education. Hmmm. I prefer to think that what's lacking is the ability to see truth and compassion and reality enough to go around.
If I share with you what I have I'll be ruined and reduced to nothing -- no clothes, no place to dwell, no body, no privilege to own what belongs to me alone.

Hello?
Posted by meetingbrook at 1:32 PM

Not long ago I bought a lottery ticket. I grew frightened I might win.

A clean, deserted cave in the rock,

At the end of an obscure trail.

The stream is clear enough to

The cave quiet enough for you

To forget the world.

The radishes have sprouted,

And the grapes have leafed out.

Quite satisfied, I take a short nap.

Awakening, I see that the clouds have returned.

I don't buy them any longer.

I've noticed something about not having much money. Gratitude.

For what I have.

Two very nice people have asked me to officiate at their wedding next Saturday. As a Notary Public in Maine I can do so. I've been thinking about what it means to say, "Yes."

I roll up the Day-At-A-Glance page from 22April2010 and toss it at the cat who claws door to mudroom scratching wood, watching me as he commits his blackmail, and cries to be let out. There is a mouse that climbs up the wood and rope hoisting the bird feeder and squeezes inside to sup on sunflowers in the dooryard. The cat sits under the feeder for hours at night. I won't let him out tonight. The world will play itself out with him inside. It will be an early bedtime. 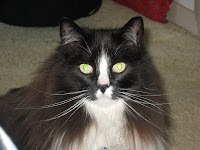 The world is... the natural setting of, and field for, all my thoughts and all my explicit perceptions. Truth does not "inhabit" only "the inner man," or more accurately, there is no inner man, man is in the world, and only in the world does he know himself.
(-Maurice Merleau-Ponty, in Phenomenology of Perception, Preface, 1945)

No world, no us. No outside, no inside. Just the world as itself in itself.

Mouse is in the feeder. Cat is in the house. I am soon in the bed.

What is lovely about being alive is that when the faucet lets fall a drop of water into a saucepan in the sink the sound fills the room and I am right there in its arrival even across the room.

When I opened the bird-feeder the other night the mouse peeked over the edge at me.

I wished it good eating.
Posted by meetingbrook at 9:46 PM