The presentation ends nothing.


Substitution means that ethically the boundary between myself and the other seems almost to dissolve, so that however unique we are as two different perspectives on the world, however unequal we may be in terms of worldly advantage or strength, in the end I must find it impossible to distinguish her well-being from mine. If one makes this a conscious realization vis-a-vis the other, then it is clearly a form of self-denial comparable to the annihilation-of-self that Weil associates with imitating the divine abdication: "God denied himself for our sakes in order to give us the possibility of denying ourselves for him." (p.89, Simone Weil, Waiting for God, c.2001). The resemblance her idea bears to substitution is all the more striking a page later, when Weil writes that the person "from whom the act of generosity proceeds can only behave as he does if his thought transports him into the other. . . . [He] accepts to be diminished by concentrating on an expenditure of energy, which will not extend his own power but will only give existence to a being other than himself, who will exist independently of him." (WG 90). Weil goes so far as to express this as "consenting" to one's own "destruction" (WG 91) in favor of the other's "creation." Without this emphasis on "destruction" -- here closely allied with Weil's notion of "affliction," to which we will turn in a moment -- the image of being "transported into the other" could easily be dismissed as hyperbolic metaphor. Decreation is a "self-destruction" to which the other invariably calls me -- a call integral with the ordinary course of life, if no less "supernatural" for all that.

(pp.32-33, from Decreation as Substitution: Reading Simone Weil through Levinas, by Robert Charles Reed, Boston College, in The Journal of Religion, Jan. 2013)

Curious, isn't it -- you don't figure nothing as having nowhere to go.

These days I imagine mysticism to be seeing someone through another.


While it is not yet clear what the call calls me to do, it should be evident that decreation , like substitution, amounts to an ethical relation to the other which, far from privileging my "being" over against theirs, deliberately reverses the priority I naturally give to self-preservation.
But how does such a reversal become concrete? Must one literally make a physical sacrifice of oneself? For good reasons, Weil is reluctant to give us an explicit formula, although she therefore leaves us somewhat in the dark as to how one reverses so basic a priority. Levinas's answer might be that there is no need for us actually to do anything: the reversal is already the essence of what it means to be a self. Subjectivity is already to be substituted for the other. Whatever it may subsequently entail in terms of action, substitution is not something one wills or even does; it is the very essence of human selfhood. In Levinas, therefore, we find not merely certain striking parallels with Simone Weil's thought, but a way of understanding decreation as in some sense a basic ingredient or fulfillment of ethical subjectivity.
(--Reed, 33)

Or, beyond mysticism, I imagine the seeing of oneself in others invites seeing no-self through others, merely, the one there.

Is pure subjectivity pure objectivity? No self, no other?  This might be different from "me" and "you."
To see through another means to see what the other sees. To see my self through you. Self and other become what they are -- not one, not two.

Merely what is seeing.

Who said it? Was it Paul Valery?

It went: Not to conclude is a sign of a creative mind.

To conclude is calculative.

To unconclude is to create.
Posted by meetingbrook at 10:46 PM

We are living different streams at once.

You know this is true, and so do you.
Posted by meetingbrook at 11:06 PM


"Don't be afraid to take a big step if one is indicated. You can't cross a chasm in two small jumps."
--David Lloyd George


Haiku
(for buddhist practitioner on his birthday)

One day into next
year -- what does "first glimpse" augur?
Birds fly free. Fondly...
(wfh) 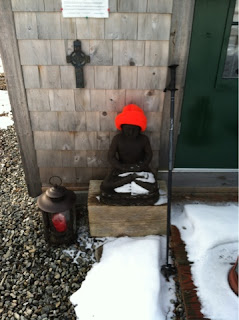 In an article written in 1999, Gary Cummins tells about Thomas Merton's three epiphanies: wherein, in a Havana Cuba church, 1940, he sees heaven; on a Louisville Kentucky street corner, 1958, he sees the human race; and in Polonnaruwa, Sri Lanka, 1968, he sees creation.

I can imagine Raimon Panikkar smiling with his word, "cosmotheandric" -- the concretion and synthesis of any future spirituality. 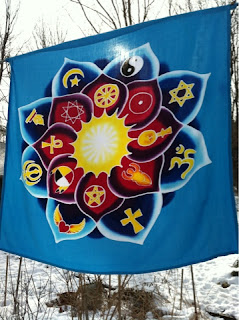 In Havana, he had seen heaven; God belonged to him. In Louisville, he had seen the human race; they belonged to one another. At Polonnaruwa, the inert rock pulsated with divinity, reality, life: all matter was charged with compassion, the cosmic body of Buddha, the essence of all things. He had seen emptiness (sunyatu) and compassion (karuna), the primary elements of enlightened-mindedness, the All and the Nothing of St. John of the Cross. 59 Theologically, he had written, there were differences, but psychologically, there was “an exact correspondence between the mystical night of St. John of the Cross and the emptiness of Sunyata.”All religions, Merton had said, end up “with the simplest and most baffling thing of all: direct confrontation with Absolute Being, Absolute Love, Absolute Mercy or Absolute Void.” 61

[Meister] Eckhart, imagining Paul’s vision on the Road to Damascus, described what Paul had seen: 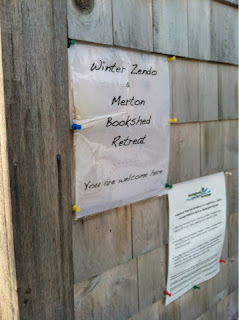 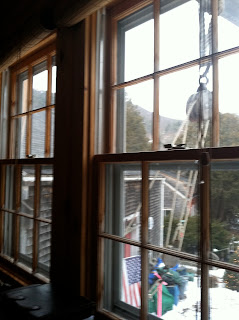 Why are we here?

We are
All here
To be
Alone 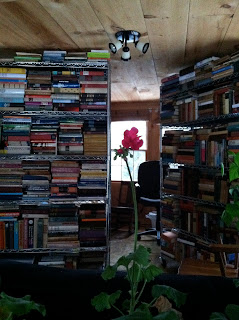 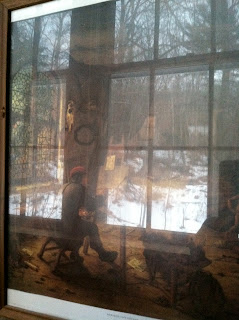 Together
Posted by meetingbrook at 11:47 PM

It just might be that the Catholic Church has exhausted its institutional vice grip on the men and women under its control. It might finally become what so many over the centuries have become.

In quiet hidden places contemplatives and solitaries, ordinary individuals, are no longer compelled to follow the dictates of anything outside. Their completely interiorized and non-dual space of patient acceptance and participatory engagement with the holy-itself as wholly-itself, allows the entering, engaging, and becoming radically empty experiences of nameless trust in the longing of creation to serve and love itself in others, to care for and be-with others in themselves.

The church is dead! Long live what will become of it!

Long live the open-space, the within/without of no-other, the non-dichotomous presentation of true-reality, the profound residing place of what we are becoming-in-becoming, the simple complexity of dwelling with the no-other in the no-other as no-other.

Gather nothing. Let each go its own way into what is itself the wordless gaze of imageless kindness and wisdom felt as compassionate presence. 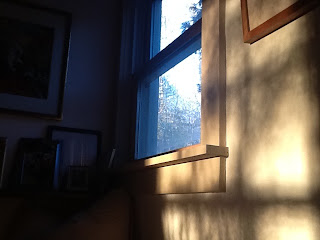 Posted by meetingbrook at 7:36 AM