Her words rang true: "...where he is is really immaterial."
Mary Ewert said this soon after her husband Craig Ewert's 2006 physician-assisted suicide in Switzerland. The film made by John Zaritsky, The Suicide Tourist chronicled their journey together in the final days of his life. He'd been diagnosed with ALS, a motor neuron disorder, and preferred to die while he still had the capacity to actively take his life before his disease further ravaged his body, and he loses the option to die without what he felt might be unbearable suffering.
http://www.pbs.org/wgbh/pages/frontline/suicidetourist/view/?utm_campaign=viewpage&utm_medium=grid&utm_source=grid

He's there. He drinks the potion. He's gone. Anyone who's been at someone's death knows the experience.

The body is no longer his home. We have no particular idea where Craig, as he was known, has gone. Just that he's no longer there in an observable, sensible, communicable way. Some would say his soul took flight. Whether or where that flight alights is beyond the ability of those remaining behind to experience or know...for the time being.

You stop to point at the moon in the sky,
but the finger's blind unless the moon is shining.

One moon, one careless finger pointing --
are these two things or one?

The question is a pointer guiding
a novice from ignorance thick as fog.

At first light, 4am, I'm reading the book Rosy left, The Simple Faith of Mister Rogers, by Amy Hollingsworth. At 5am I'm on my cushion in the zendo, the Phoebes arriving and departing in quick succession outside and over the window. Coffee and cereal with silence and solitude moved the morning through deluge with thunder and lightning. Now I sit in Merton Bookshed/Retreat as across Barnestown Road the sounds and balloons of a celebration fill the air while Gregorian Chant plays downstairs. In the interim I nap, mail book to Maine State Prison, and bail dinghy in Rockport Harbor.
I retreat. Sunlight glistening green leaves.

What do you think of death? I don't know what to think.

I know what Lydia thinks - she reads us Milne in our Friday poetry group:

When I was One,
I had just begun.

When I was Two,
I was nearly new.

When I was Three,
I was hardly Me.

When I was Four,
I was not much more.

When I was Five,
I was just alive. 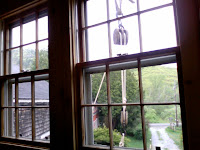 So we go along one day at a time. One hour. One minute. One second. We go along as if there is no end. Who knows? Maybe we go along because there is an end.

COME OUT WITH ME

There's sun on the river and sun on the hill . . .
You can hear the sea if you stand quite still!
There's eight new puppies at Roundabout Farm-
And I saw an old sailor with only one arm!

There's wind on the river and wind on the hill . . .
There's a dark dead water-wheel under the mill!
I saw a fly which had just been drowned-
And I know where a rabbit goes into the ground!

To see.
For now, it's immaterial.
Posted by meetingbrook at 3:08 PM

When I began to learn Vipassana meditation, I became convinced that Buddha was a not a founder of religion, he was a super-scientist. A spiritual super-scientist. When he teaches morality, the point is, of course, there that we are human beings, living in human society, and we should not do anything which would harm the society. It’s quite true. But then—and it’s as a scientist he’s talking here—he says that when you harm anybody, when you perform any unwholesome action, you are the first victim. You first harm yourself and then you harm others. As soon as a defilement arises in the mind, your nature is such that you feel miserable. That is what Vipassana teaches me.
-S.N. Goenka, "Superscience" (Tricycle, Winter 2000)

Instead of trying to siphon and collect the gushing oil to sell it, the company BP might actually now be trying to stop the gushing oil. Or is it the other way round? That's what someone said this morning. It added a perspective unthought before.
It's a long haul.
Truthfulness.
Posted by meetingbrook at 12:58 PM

I'm surprised the anarchistic is not mentioned. No ruler. How can we go on without measure?
Organizations and institutions, clubs and cults, professional societies and political fraternities -- all these are outside anarchistic affections. This world is an uneasy one to negotiate. More to the point, it is non-negotiable.

Something eludes me. Stasis surrounds. I stare. I think I am losing interest. Solitude, today, is wordless engagement with silence. Like the pitcher who threw a perfect game, when the 1st base umpire made a universally undisputed (even by his own admission) wrong call on the 27th out, thus voiding the perfect game into one with an umpire's error, the game must be taken as a whole, for some an injustice, for others an absurdity, but in the end, a meaningless distraction, unlike the 19 year old American/Turkish citizen Furkan Dogan shot five times, twice in head, who along with 8 other Turkish members of the flotilla attacked by Israel, was killed while escorting supplies for blockaded Gaza, which is a matter for our attention, which is something to stare at. Or through.

Where the clear stream of reason has not lost its way into the dreary desert sand of dead habit;
Where the mind is led forward into ever-widening thought and action -
Into that heaven of freedom, let us awake.
(--by Bengali poet and Nobel Laureate Rabindranath Tagore) 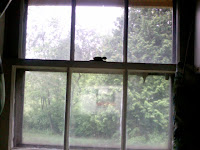 There is nothing on this misty damp day that should be said about our sleep. We must only acknowledge we are asleep, which acknowledgment only can be made once we awaken and realize we've been asleep. Further compounded by the belief on the part of the sleepers that they are functioning exactly as they should. Call 'em as you see 'em. Protect the small nation from enemies. Amass wealth while the getting is good. Damn the complainers and open the oily spigot.

Becket tells Henry in the final act of a favorite play:

I felt for the first time that I was entrusted with something, that's all — there in that empty cathedral somewhere in France, that day when you ordered me to take up this burden. I was a man without honor. And suddenly I found it — one I never imagined would ever become mine — the honor of God. A frail incomprehensible honor, vulnerable as a boy-King fleeing from danger.
(--from final act of play, Becket, or The Honor of God, by Jean Anouilh, 1959)

The honor of God is not absurd. I am absurd. Out of tune. Deaf. Irrational. Dull. I wear these attributes with no ambition to escape them.

To be in tune. Hearing. Reasonable. Alert. These qualities would be gift. Gifts generously extended with no conditions.

Posted by meetingbrook at 12:32 PM

Let's be sure what the so-called spiritual life is about. It is about simplicity, humility, and kindness.

Do not remain in the dualistic state;

If there is even a trace

Of this and that, right and wrong,

The Mind-essence will be lost in confusion.

Although all dualities come from the One,

Do not be attached even to this One.

When the mind exists undisturbed in the Way,

Nothing in the world can offend,

And when a thing can no longer offend,

It ceases to exist in the old way.

It is not control. Not reaching for something elsewhere. Nor is it adherence to some ideological or religious point of view.
It is each to be at home. That is hospitality. Allowing someone to think and feel as they do.
The spiritual so-called life is about forgetting forgetting and remembering to remember.
Whatever happens, if seen again with love, is how memory presages future with whole sight now.

Simplicity's so great that should God lack her might

He would be neither God, nor Wisdom, nor the Light.

The hardest thing about the spiritual life is allowing what is emerging to do so with alert intelligent attentive presence.
Nothing else has ever been so attractive.
Posted by meetingbrook at 11:30 PM

Watch Jim Sheridan's film "Brothers." They say it is about family not war.

It is about war.

After rain, flowers bloom in the night
And refresh the dawn window
With their clear fragrance.
The flowers smile at people,
As if with minds of their own,
But the monks in the Zendo
Waste the spring.
- Pyungyang Ungee (1581-1644)

The line, "Only the dead have seen the end of war," is heartbreaking.

We have the first TOD (talk of death) Pilot to Practice tonight.

“The law is for the wicked; if no commandment were written, the godly would yet love God and their neighbor.” — On the higher level of cognition the innocence of nature is thus given back to man. He accomplishes the tasks which are set for him with the awareness of an eternal necessity. He says to himself, Through this iron necessity is given into your hand to withdraw that part which is assigned to you from this same eternal necessity. “O Men, learn from the flower of the field how you can please God and be beautiful at the same time.” — “The rose is without why; it blooms because it blooms; it pays no attention to itself, nor asks whether one sees it.” — When man arises to the higher level he feels in himself the eternal and necessary impulse of the universe, just as the flower of the field; he acts as the flower blooms. In all his actions the awareness of his moral responsibility grows into the immeasurable. For what he does not do is withdrawn from the All, is a killing of this All, insofar as the possibility of such a killing lies with him. “What is it not to sin? Do not ask much; go, the silent flowers will tell you.” — “Everything must be slain. If you do not slay yourself for God, eternal death shall at last slay you for the Enemy.”
(--from, Mysticism at the Dawn of the Modern Age, Giordano Bruno and Angelus Silesius, by Rudolf Steiner)

Life without 'why' would be something to behold.

As would time without war.

Could we allow that?

It is Memorial Day.
We remember, pray for, and honor all dead and deadened by war.

Vinnie died in Vietnam
there's nothing more to say --
He wrote me a few times from over there
That all stopped one December day. (-wfh)

Some in graves in the ground. Some at sea. Some in unmarked unknown places
Some who've gone and returned from war... changed.
Some who've never gone to war but who have sent others to fight for reasons never quite comprehended. (These are the most difficult to include, they don't even know what death they've wrought or how they've deadened themselves.)
Today we have to see things differently. 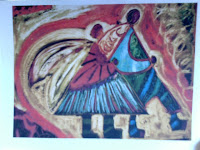 (Art by Clarity)
Let's walk among all of them -- the dead and deadened -- holding hands and singing life. Life for them. Life for those they've killed. Life for those whose lives they've saved.
We walk together.
And we walk alone, together.
In recollection and collation.
Saluting the fallen.
Posted by meetingbrook at 9:06 AM

Heal Here!
Posted by meetingbrook at 9:50 AM