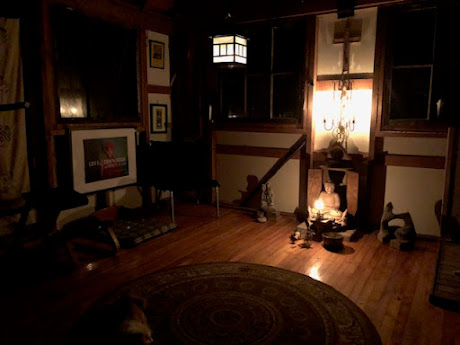 Posted by meetingbrook at 6:14 PM

no one has ever seen god

What is seeing itself

One does not see itself

One is not there to be seen

One is the emptiness through and through

As light is that which moves through darkness

Darkness, it is said, cannot grasp light moving through

What is moving through

Posted by meetingbrook at 9:59 AM

don't let anyone put you down

Posted by meetingbrook at 5:05 PM

causing suffering to another

In prison today we spoke of the difficulty of someone getting into your business, giving you a hard time, harassing you.

"It's prison," a long-timer said to the relative newcomer, "there are bad people here."

Another inmate spoke of ways he goes about extricating himself from antagonistic or aggressive interactions. Short of violence, how respond?

Not an easy conversation.

Sidestepping for a spell, the old-timer wanted to talk about evil. Some words about the meaning of the name "Satan" "Lucifer" or "Shaiṭān." Adversary. Accuser. Missing mark mayhem maker.

Is it true that every act seems to the actor to be good, at least for them? Is "evil" the failure to respond to another in a way befitting our common connection and mutual longing for peace and harmony?

Why do we cause suffering to another?

Why the cross? Why the First Noble Truth?

These are hard questions. In prison there is no escaping them. Nor are they academic considerations. They are immediate, unrelenting, and everyday.

Options were brought up. Strategies. Tactics. Attitudes of mind. And recognition of the suffering, background and foreground, of those involved. "Hurt people hurt people" someone said.

No place for vague philosophy or bromide encouragement here. Just the hard work of considering the physics of light, weightless and shining through darkness, not eliminating it. An impossible nexus of science and spirituality.

Accepting the causes and conditions of real and present approximations of hurt people hurting on other hurt people.

Time grew short. We'd listened. We thought. We spoke to one another. We, by and large, understood the issue. In the context and confines of prison there's no escaping the suffering, misunderstanding, and set of bad choices available to someone faced with unpleasantness and aggressive encounters.

We were Muslim, Buddhist, Greek Orthodox, Catholic, and Shaivite. We talked about how these traditions see things.

We were reading Billy Collins poem "Flying Over West Texas at Christmas" for the second reading when the guard came in to say we had to end, things were shutting down ten minutes early. We did a fast final circle. Wished one another Happy New Year.  Bumped elbows, shook hands, fist knuckled.

The man who brought up the issue stopped at the door, turned, looked straight and steady into my eyes as we stood very close. He said it was helpful. Said he prays. He said he'd take what everybody said and mull it.

I get to walk out.

In sha’Allah, I thought.

God help us, I prayed.

I get coffee at the place on Route 1.

Posted by meetingbrook at 2:59 PM

yes, they will soon die

Are abused, hurt and die —

We adore the wealthy

The powerful above law

Posted by meetingbrook at 10:33 PM

how’s the wife and kids

I cannot read the name or message the new executive director hands me after the conference in Philadelphia.

In the dream John is sitting at his desk through door in lower gym out of reach; he has died and generous hospitality is gone.

Or course, of course, I have nowhere to go, an artifact of former time, these kindly strangers, don’t even ask who I am.

The wonder of desolation! There is no belonging in rucksack. It holds everything — images of ghosts, tranche confusion, unformed faith,

They ski on Ragged

Posted by meetingbrook at 9:01 PM

and there she remained

Is there to be

In the middle of

Posted by meetingbrook at 3:17 AM

some flowers before the stone

Whose touch is nigh on perfect.

Flying Over West Texas at Christmas

with a ruler line of a road running through you,

you anonymous cluster of houses and barns,

miniaturized by this altitude

in a land as parched as Bethlehem

a beautiful song should be written about you

which choirs could sing in their lofts

and carolers standing in a semicircle

could carol in front of houses topped with snow.

For surely some admirable person was born

within the waffle-iron grid of your streets,

who then went on to perform some small miracles,

placing a hand on the head of a child

or shaking a cigarette out of the pack for a stranger.

But maybe it is best not to compose a hymn

or chisel into tablets the code of his behavior

or convene a tribunal of men in robes to explain his words.

Let us not press the gold leaf of his name

onto a page of vellum or hang his image from a nail.

Better to fly over this little town with nothing

but the hope that someone visits his grave

once a year, pushing open the low iron gate

then making her way toward him

through the rows of the others

before bending to prop up some flowers before the stone.

(—Poem by Billy Collins,  from Aimless)

Posted by meetingbrook at 10:11 PM

Meister Elkhart writes that there is no image nor likeness with regard to God. In my youth I was taught that we were created in the image and likeness of God.

We look for God and we find nothing. And we are surprised.

We search for our self, and we find nothing. We think self-knowledge will clarify things. We discover there’s nothing to know.

What is there to be done with this nothing?

There’s nothing to be done.

Where are we? And where is God?

Look no further than here.

The going out is the coming in. It’s a quantum paradox.

Here is where there is.going.  Where is that?

Here is all there is.

There’s no there there.

We are always and only here.

Posted by meetingbrook at 7:35 AM

we are poor passing facts

And to humanity, a new beginning!

Posted by meetingbrook at 11:54 PM

we are born for one another, oggi (today)

The Nativity -- The Adoration of the Shepherds 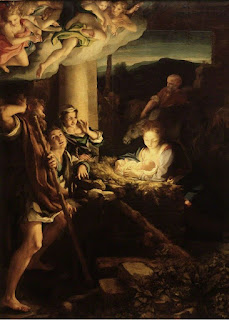 Posted by meetingbrook at 3:31 AM