There are modes of thought difficult to avoid.


Hegel’s Science of Logic
Volume One: The Objective Logic

Chapter 1 Being
A Being
§ 132
Being, pure being, without any further determination. In its indeterminate immediacy it is equal only to itself. It is also not unequal relatively to an other; it has no diversity within itself nor any with a reference outwards. It would not be held fast in its purity if it contained any determination or content which could be distinguished in it or by which it could be distinguished from an other. It is pure indeterminateness and emptiness. There is nothing to be intuited in it, if one can speak here of intuiting; or, it is only this pure intuiting itself. Just as little is anything to be thought in it, or it is equally only this empty thinking. Being, the indeterminate immediate, is in fact nothing, and neither more nor less than nothing.

B Nothing
§ 133
Nothing, pure nothing: it is simply equality with itself, complete emptiness, absence of all determination and content — undifferentiatedness in itself. In so far as intuiting or thinking can be mentioned here, it counts as a distinction whether something or nothing is intuited or thought. To intuit or think nothing has, therefore, a meaning; both are distinguished and thus nothing is (exists) in our intuiting or thinking; or rather it is empty intuition and thought itself, and the same empty intuition or thought as pure being. Nothing is, therefore, the same determination, or rather absence of determination, and thus altogether the same as, pure being.®

C Becoming
1. Unity of Being and Nothing
§ 134
Pure Being and pure nothing are, therefore, the same. What is the truth is neither being nor nothing, but that being — does not pass over but has passed over — into nothing, and nothing into being. But it is equally true that they are not undistinguished from each other, that, on the contrary, they are not the same, that they are absolutely distinct, and yet that they are unseparated and inseparable and that each immediately vanishes in its opposite. Their truth is therefore, this movement of the immediate vanishing of the one into the other: becoming, a movement in which both are distinguished, but by a difference which has equally immediately resolved itself. ®

There are correspondences hard to extrapolate.


A Nigerian man who had recently fled to Europe to escape Boko Haram militants was beaten to death on the streets of Italy this week as he tried to defend his wife against racist abuse.
Emmanuel Chidi Namdi, 36, and his wife Chimiary, 24, were walking through the north-central Italian town of Fermo on Tuesday when a man called Chimiary a “monkey” and tried to grab her, according to local priest Vinicio Albanesi, a friend of the couple.
Namdi intervened, and the resulting fight left him in a coma. He was pronounced dead on Wednesday.
Amedeo Mancini, a 38-year-old Italian man who is part of an “ultras” gang of extremist soccer fans, was arrested Thursday on suspicion of killing Namdi. Mancini told investigators that he’d insulted the couple because he thought they were stealing a car, and he claimed that he’d acted in self defense after Namdi attacked him, HuffPost Italy reported.

There are instances of remembrance important to recall.

Posted by meetingbrook at 10:00 PM

becoming what once we thought about

I know what is causing the shootings in this country.

A corrupted dualistic mode of thinking is what is driving the bus toward the edge of the cliff for its drop thousands of feet, thousands of years, into a hard bottom which will break everything into pieces of blood splattered and destroyed lives.

Until we look deeply within, profoundly meditating on the inner evolving changing consciousness, radically contemplating the unifying complementarity of non-duality, we will continue to battle one another, we will continue to murder, maim, and horribly wound one another. We will cultivate the meme of enemy. We will gather unto ourselves the means to harm and separate and make life a fearful experience.

Non-dual awareness will save us.

Compassion finding itself surrounding.
Posted by meetingbrook at 10:28 AM

after dallas, baton rouge, minnesota; after all

OK, I’ve had my rethink. I choose not to own gun nor shoot anyone.

You?
Posted by meetingbrook at 6:57 AM

one time is too many

the time has come

we are out of time

it ends here
i refuse to murder my family, to fear

doing to what being is trying to reveal
to look beneath, beyond, and

what longs to be seen
what cannot bear to be continued unloved
Posted by meetingbrook at 8:05 PM

like there's no
tomorrow
Posted by meetingbrook at 5:58 AM

Q: Why go to church on obscure weekday?

A: I go to church to find myself there.

Comment:
Who is "myself?" And why do we think it odd that "myself" might not be an interior capacity, but rather a circumstance of proximity and intimacy, even at a distance? We find this surround of self wherever we look.
Not the looker, nor the looked-at, but the looking-itself.
Self, like thoughtful intelligence, is a fluidity of found approximate awareness revealing itself in the instant.
Posted by meetingbrook at 7:13 AM

A: To be allowed!
Posted by meetingbrook at 7:06 AM

For My Young Friends Who Are Afraid,
by William Stafford

There is a country to cross you willfind in the corner of your eye, inthe quick slip of your foot—air fardown, a snap that might have caught.And maybe for you, for me, a high, passingvoice that finds its way by beingafraid. That country is there, for us,carried as it is crossed. What you fearwill not go away: it will take you intoyourself and bless you and keep you.That’s the world, and we all live there.
“For My Young Friends Who Are Afraid” by William Stafford from The Way It Is: New and Selected Poems. © Graywolf Press 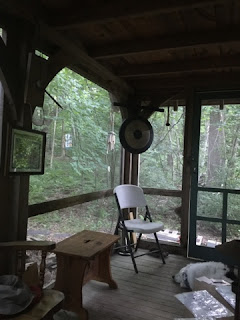 Posted by meetingbrook at 7:02 PM

Depend on one, this once, day

Was he free? Was he happy? The question is absurd:

Had anything been wrong, we should certainly have heard.

Is  independence synonymous with freedom?

And, can we be happy defining ourselves in opposition to other religions, nationalities, races, and understandings of what it means to be alive for once in the world today?

I would be happy to offer myself to the next suicide bomber, to stand ten feet away as he detonates his explosives, as he thanks his God for the opportunity to serve and destroy. Why would I do such a thing? Freedom requires the willingness to say yes to the unfree, the deluded, the oppressively ideological, the true believer who is without real feeling for anyone or anything else but his obsession.

This yes is not to the obscene and insane act that either the terrorist of the patriot conceives of committing in the name of their general good.

Itself in the world -- for this once -- is to be construed as the-one-we-call-God. Not someone else, not somewhere else, not something else -- but right there, right here. The individual, sight unseen, as the Divine Holy One is.

America is (or could be, again) great because it can hold within it the insanity of being human in a time of desperate uncertainty and confusion.

Insanity is an awkward way of exercising our internal squared-away judging opinions as answers upon an external chaotic and questioning world. It is the curious solipsistic narcissism of the person who thinks themselves certain and in control that ensures militaristic rigidity and/or terroristic psychosis as dual cousins both uncaring and non responsive to the questions that individuals, that freedom, tries to ask in front of them.

Obviously one person's life doesn't amount to a hill of beans in the eyes of the patriot or terrorist.

It is the Fourth of July.

Something wants to be remembered.

Not merely flag-waving and fireworks.

Something else. This once. 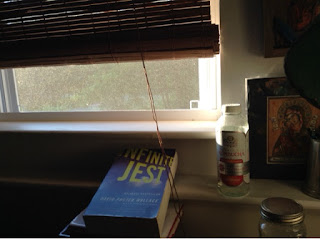 That we are here.

That we are here and ready to celebrate complexity and uncertainty.

That we are here to be the individual freedom that is foundation for collective caring.

Depend on what is within.

Depend in. For once. At least for this once.

Depend on one, this once.

This is the day!

Have you heard?
Posted by meetingbrook at 4:53 AM

Joshu's clogs on his head

"Change is never painful,
only your resistance to change is painful."
— Buddhist Proverb
Posted by meetingbrook at 10:37 PM