To pray always is to practice this absolute unmixed attention.
Begin again.
You are in my prayer.
Posted by meetingbrook at 11:19 PM

Totality means continuity -- the carrying on of a former habit of action with the readaptation necessary to keep it alive and growing. Instead of signifying a ready-made complete scheme of action, it means keeping the balance in a multitude of diverse actions, so that each borrows and gives significance to every other. Any person who is open-minded and sensitive to new perceptions, and who has concentration and responsibility in connecting them has, in so far, a philosophic disposition.
(John Dewey, in Democracy and Education)

If you haven't seen the film Departures, do.

Pine trees murmur in the wind.
Spring water bubbles in stone.
The moon sets at dawn.
An owl hoots in the mountains.
- Jinkag Haesim (1178-1234) 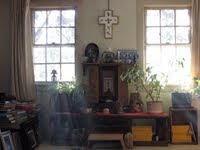 That's what the gate-keeper said.
Posted by meetingbrook at 11:59 PM

Temporary site for events and update.
For Events, see http://sites.google.com/site/meetingbrookhermitage/Home/events-at-meetingbrook
Posted by meetingbrook at 6:54 PM

Dying is safe. That's what Singh said in her book. Good words.

My personal response to the themes of hospice conversation:
Be still with it, listen with a silence that sorts; a silence which is “an ordering instinct [which] sends people into the hush where the voice can be heard." (Patricia Hampl)-

Spirituality is the longing for true home, for true belonging; religions are the attempts to organize that longing. One is not the other. We each have an innate spirituality. Sometimes that spirituality finds a welcoming organization for it to visit.

Trust the dying person and yourself to allow the revealing of what needs revealing in its own good time. No forcing. No fretting. No trying to save or change the dying person’s view. Only loving, compassionate, presence.

We are guests and visitors to their journey. We are not teachers and guides. We must learn with them their way at this time in this place.

We respond with our presence and our appreciation of the questions. Honest open conversation follows honest open listening.

To serve as a companion on the way. Be “voluntary” in your support and understanding, i.e., “voluntary (of your own free will or design; done by choice; not forced or compelled”-

Some do. And that’s the wonder of being alive amid so much diversity. There are many ways. The task of the volunteer is to be open and responsive to the particular focus and questions of the dying person, and to be of whatever assistance you can be. You do not need to know the answers to all questions. But you can help to assist the dying person and the family feel more comfortable in the search. 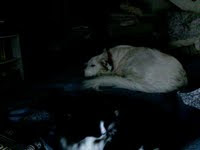 'Safe': from Latin 'salvus' meaning 'uninjured.' Not likely to be harmed or lost.

We are safe. Dying is safe. Death is safe.

Don't be stingy. That's the 8th precept. It was table reading tonight.
We haul water from the brook. Well pump died.

Subhuti, does it occur to you that I believe that through me living beings are led to liberation? Never think that way, Subhuti. Why? Because there is no separate being to lead to liberation. If I were to think there was, I would be caught in the notion of a self or person or a life span. Subhuti, what I call a self is essentially not a self in the way that an ordinary person thinks of it. But neither do I think of anyone as an ordinary person. However, knowing the essence, I can use the name, ordinary person.
(- from Diamond Sutra)

We walk pastures and back fields today on other side of Ragged near Alfred Lake. So little snow remains.

"Prayer only looks like an act of language; fundamentally it is a position, a placement of oneself. Focus. Get there, and all that's left to say is the words. They come: from ancient times, from the surprisingly eloquent heart, from the gush and chatter of the day's detail longing to be rendered.

So what is silence?

Silence speaks, the contemplatives say. But really, I think, silence sorts. An ordering instinct sends people into the hush where the voice can be heard."
(—Patricia Hampl, excerpted from Virgin Time; quoted on 'Speaking of Faith' with Krista Tippitt, Krista's Journal, May 22, 2008) 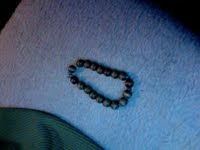 We'll talk about prayer and spirituality tomorrow at hospice training. An open invitation to invite the open.

"[The French philosopher Simone Weil said, 'Absolutely unmixed attention is prayer.'] I love that. I think that could be as close as someone can get to a wonderful definition of prayer. In that sense, prayer has nothing spiritual or religious about it. A mathematician working at a problem or a little kid trying to pick out scales on the piano is a person at prayer. She's not saying prayer is absolute unmixed attention; it's the other way. The attention itself is the quality that she wants to call prayer. So whatever context you're putting it in, whether it's inside a church or inside a toy box, that's the quality that is the sacred one."
(--from Krista's Journal, May 22, 2008, quoting Translator Stephen Mitchell)

In everything you do.
Posted by meetingbrook at 8:58 PM