God does not care for you.
There's no subject/object here.
God is care itself.
And you are nothing other than; God.
Posted by meetingbrook at 3:13 AM

six degrees; the nothingness beyond, god

Our yearning to care in a world yearning for care.

At times we don't care.

A coincidence of opposites.

Posted by meetingbrook at 2:25 AM

When the mind is free from

Every season is just perfect!

Posted by meetingbrook at 3:33 AM

Those who love God must also love their brother and sister.

A reading from the first Letter of Saint JohnBeloved, we love God because   he first loved us.If anyone says, “I love God,”   but hates his brother, he is a liar;   for whoever does not love a brother whom he has seen   cannot love God whom he has not seen.This is the commandment we have from him:whoever loves God must also love his brother.Everyone who believes that Jesus is the Christ is begotten by God,   and everyone who loves the father   loves also the one begotten by him.In this way we know that we love the children of God   when we love God and obey his commandments.For the love of God is this,   that we keep his commandments.And his commandments are not burdensome,   for whoever is begotten by God conquers the world.And the victory that conquers the world is our faith.

(--from Readings, Thursday after Epiphany)

Posted by meetingbrook at 3:14 AM

His name was Duffy in the book.


"He lived at a little distance from his body, regarding his own acts with doubtful side-glasses." (--from, A Painful Case, by James Joyce, in The Dubliners)

Elsewhere, say, in Washington, another man wanders through chaos reaching for anyone nearby to cling to something solid.

We can only hope he, not the man in the story, moves further and further away into some enclosed setting where his grabbing hands find no one to drag down.

Posted by meetingbrook at 10:17 PM

not necessary to continue in the same direction

Listening to man who wants to build a wall. He is a mountain, not unlike the mountain of refuse at our town dump.

A mountain cannot turn, but a road can

It is not necessary to continue in the same direction, there are other alternatives to avoid an obstacle

There's more than one way to skin a cat

Surely there is a road the rest of us can peregrinate.

Wave to that man.

He, or we, must leave this place.

A day will come when everyone will figure out that stupidity is no way to negotiate the needs of the world.


Whirled by the three passions,

Closed to the world of things,

In this way I live:

Through earth, through heaven.

I look forward to seeing that day.
Posted by meetingbrook at 11:54 PM

who wants to be forgotten

There is much to worry about here.

In case we forget.

A reading from the first Letter of Saint John1John 2:18ff


Children, it is the last hour;   and just as you heard that the antichrist was coming,   so now many antichrists have appeared.Thus we know this is the last hour.They went out from us, but they were not really of our number;   if they had been, they would have remained with us.Their desertion shows that none of them was of our number.But you have the anointing that comes from the Holy One,   and you all have knowledge.I write to you not because you do not know the truth   but because you do, and because every lie is alien to the truth.

Jn 1:1-18
The Word became flesh.
A reading from the holy Gospel according to John

In the beginning was the Word,      and the Word was with God,      and the Word was God.
He was in the beginning with God.   All things came to be through him,      and without him nothing came to be.   What came to be through him was life,      and this life was the light of the human race;   the light shines in the darkness,      and the darkness has not overcome it.A man named John was sent from God.He came for testimony, to testify to the light,   so that all might believe through him.
He was not the light,   but came to testify to the light.The true light, which enlightens everyone, was coming into the world.
He was in the world,         and the world came to be through him,         but the world did not know him.      He came to what was his own,         but his own people did not accept him.But to those who did accept him   he gave power to become children of God,   to those who believe in his name,   who were born not by natural generation   nor by human choice nor by a man's decision   but of God.      And the Word became flesh         and made his dwelling among us,         and we saw his glory,         the glory as of the Father's only Son,         full of grace and truth.
John testified to him and cried out, saying,   “This was he of whom I said,   ‘The one who is coming after me ranks ahead of me   because he existed before me.’”
From his fullness we have all received,   grace in place of grace,   because while the law was given through Moses,   grace and truth came through Jesus Christ.
No one has ever seen God.
The only Son, God, who is at the Father's side,   has revealed him.

“The experience of the radical Trinity is to know oneself enveloped in a cosmotheandric perichoresis” (The Fullness of Man).

“There is nothing but God, a God that, as absolute ‘I’, has an eternal ‘Thou’ that is equal to him and nonetheless not a second ‘I’ but always a ‘Thou’. This ‘Thou’ is the Son, is the total Christ who includes the heavens and the earth. All beings share what they are by being one with him, with the Son. All that exists, that is to say, all of reality, is nothing but God: Father, Son and Holy Spirit. All that exists is nothing but Brahman as sat, cit, and ânanda, as being, consciousness, and beatitude. Sat as the very foundation of all that in one form or another constitutes ‘being’. Cit as the spiritual or intellectual bond that surrounds and penetrates all of reality. Ananda as perfect fullness that receives into itself and inspires everything that reaches out toward it” (The Unknown Christ of Hinduism)

Many arrivals make us live: the tree becomingGreen, a bird tipping the topmost bough,A seed pushing itself beyond itself,The mole making its way through darkest ground,The worm, intrepid scholar of the soil—Do these analogies perplex? A sky with clouds,The motion of the moon, and waves at play,A sea-wind pausing in a summer tree.What does what it should do needs nothing more.The body moves, though slowly, toward desire.We come to something without knowing why.

(Poem, The Manifestation, by Theodore Roethke)


Poem, The Old Poets of China, by Mary Oliver: 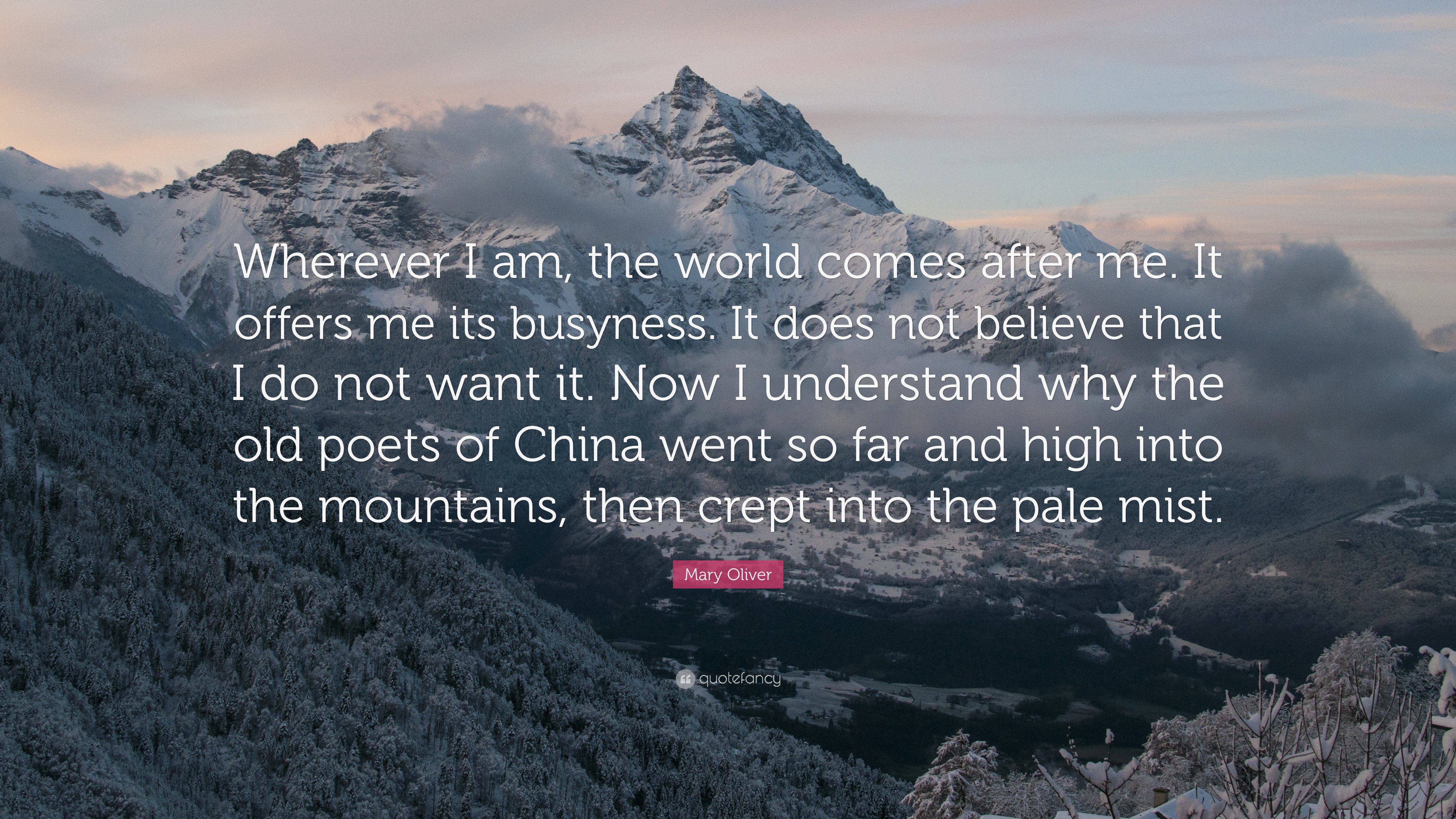 There -- I think we can begin!
Posted by meetingbrook at 7:30 AM