If we choose to act

A radical embodiment is needed. Of peace. And sanity.

Not guns. Not fear. Not arrogant shilling for cynicism.

But someone to engage and enflesh what god would be if god were in the world.

No more ideals, ideas, concepts, or plans of action. 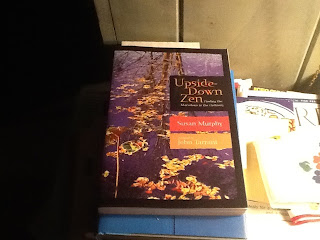 It does not mean flawless and finished.

One can move through the perfect. There's a plasticity.

We're all perfect. Moving forward. Causing to be.

Alive for now.
Posted by meetingbrook at 10:22 PM 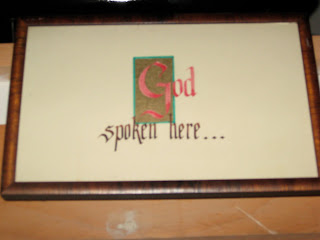 The past is where we are when we are in the present.

Past is prologue, present is logos. Everything is mythos. Voila! It is one-word, creative sound, resonating, music of and as, the spheres, dancing, us, with, in, and through, one-another. Going nowhere; staying now here!


This is an interesting time travel story because it focuses not so much on going back in order to change the past as returning to change the present because you understand the past.(--from book review of An Angel for May by Melvin Burgess,1992) http://www.readingmatters.co.uk/book.php?id=1

When we are In the past, no one is present.

Without time where would we be?

If, as the non-dualist says, god is eternal present awareness, then let god be what god is.

Why do we fuss so much about "my" god?

see?
Posted by meetingbrook at 5:54 AM

Ends the teaching for this semester. Ends Wednesday. Ends too many hours awake.

Posted by meetingbrook at 12:09 AM

If the world ends Friday, I want to be as healthy as possible.

So saying, ends the world, as previously known.

I have heard, in that fierce embrace, even
the gods speak of God. 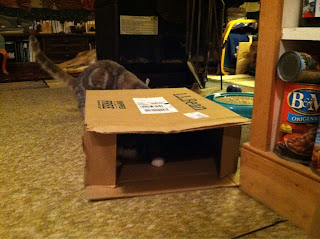 Posted by meetingbrook at 9:32 PM

Enjoy yourself, it's never what you think

Rupert Spira ends his writing, "The True Nature of Experience" with the following:


Postscript – Knowledge and LoveTrue knowledge is the experiential understanding that there is only ever-present, unlimited Awareness or Knowing. Nothing other than this is ever known even when it seems that a mind, body and world are known. This ever-present, unlimited Awareness, which is simply the intimacy of our own being, is the fundamental nature of the apparently inside self and its corollary, the apparently outside object, other or world.All religions are founded upon this understanding. In Christianity it is expressed as, “I and my Father are one.” That is, I, Awareness, and the ultimate reality of the universe are one and the same reality. In Buddhism, “Nirvana and Samsara are identical.” That is, the transparent, open, empty light of Awareness which is not made out of any kind of a thing – nothing – is the substance of all appearances – everything. Nothing taking the shape of everything. In Hinduism, “Atman and Param-Atman are one.” That is, the individual self, when divested of superimposed beliefs and feelings of limitation, stands revealed as the true and only self of eternal, infinite Awareness. And in Sufism, “Wherever the eye falls, there is the face of God.” All that is seen is God’s face and it is God that sees it.All these phrases are conditioned by the culture in which they appeared but they all point towards the same unconditional truth – the reality of all experience.The realization of this truth dissolves the beliefs in distance, separation and otherness. The common name we give to this absence of distance, separation and otherness is love and beauty. It is that for which everyone longs – not just those of us that are interested in non-duality but all seven billion of us.In this realization true knowledge and love are revealed to be one and the same – the experiential realization that the true nature of the apparently inside self and the apparently outside world are one single reality made out of the transparent light of Awareness, that is, made out of the intimacy of our own being.This revelation of understanding and love strikes at the heart of the fundamental presumption upon which our world culture is founded, the presumption of duality – I, the separate inside self, and you or it, the separate outside object, other or world. All conflicts within ourselves and between individuals, communities and nations are based upon this presumption alone and all psychological suffering proceeds from it.Any approach to these conflicts that does not go to the heart of the matter will postpone but not solve the problem of conflict and suffering. Sooner or later as individuals and as a culture we have to have the courage, the humility, the honesty and the love to face this fact.The highest purpose of all art, philosophy, religion and science is to reveal this truth in an experiential manner although all these disciplines have temporarily forgotten this in our culture. However, it may not be long. As the painter Paul Cezanne said, “A time is coming when a single carrot, freshly observed, will trigger a revolution”.This is the only true revolution, the revolution in which our view of reality is turned upside down. Awareness – pure Knowing – is not just the witness of experience. It is its substance, its very nature. Everything changes when we begin to live from this point of view. We realize that what we have always longed for in life was present all along in the depths of our own being. It is always available, never truly veiled. To begin with it is often felt as peace in the background of experience but it cannot be contained and before long it begins to flow out into the world as joy, freedom, love and creativity.

And, we presume, is happy.

Posted by meetingbrook at 7:32 PM

In her book “The Human Condition,” the philosopher Hannah Arendt states that “violence is mute.” According to Arendt, speech dominates and distinguishes the polis, the highest form of human association, which is devoted to the freedom and equality of its component members. Violence — and the threat of it — is a pre-political manner of communication and control, characteristic of undemocratic organizations and hierarchical relationships. For the ancient Athenians who practiced an incipient, albeit limited form of democracy (one that we surely aim to surpass), violence was characteristic of the master-slave relationship, not that of free citizens.

Liberty entails precisely the freedom to offend. A gun in every pocket would stifle that.

Arendt offers two points that are salient to our thinking about guns: for one, they insert a hierarchy of some kind, but fundamental nonetheless, and thereby undermine equality. But furthermore, guns pose a monumental challenge to freedom, and particular, the liberty that is the hallmark of any democracy worthy of the name — that is, freedom of speech. Guns do communicate, after all, but in a way that is contrary to free speech aspirations: for, guns chasten speech.


Posted by meetingbrook at 5:56 AM

Holding one another in heart

We want a name for it, the deaths in Newtown Connecticut.

The quarrels and arguments will take shape.

Here, for now, only stillness in the face of such sorrow.

A profound bow to all in deep distress! 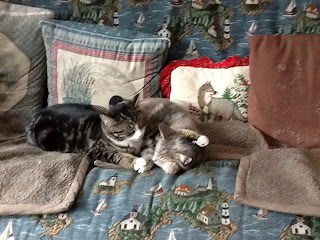 Posted by meetingbrook at 2:23 PM