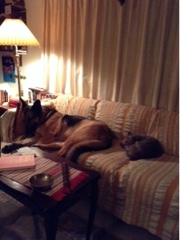 Snoozing biggest and littlest
Posted by meetingbrook at 11:52 PM

To it
Posted by meetingbrook at 4:03 PM

"The grip the present has on me. That is the one thing that has grown most noticeably in the spiritual life -- nothing else."    (Thomas Merton)   http://fatherlouie.blogspot.com

The Merton Bookshed will glow today in your effulgence!
Posted by meetingbrook at 5:24 AM

What Husserl called subjectivity and it's world of experience.

2. A movement based on this, originated about 1905 by Edmund Husserl.

Here's looking at you, kid!

Actually, here is looking at you.

No kidding!
Posted by meetingbrook at 10:59 PM

I'll have coffee with that question, please

Death inspires ethics.
It asks: If you are to die, how wish you to live?
She asks a fair question.
I'll live, for now, without sugar, inside that question.
Posted by meetingbrook at 6:53 AM 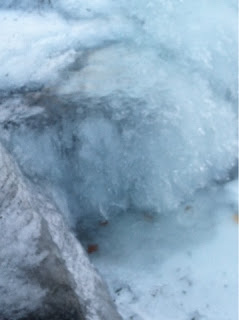 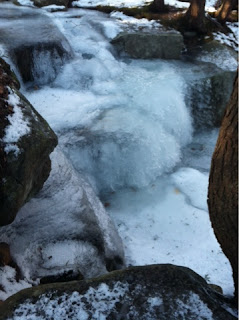 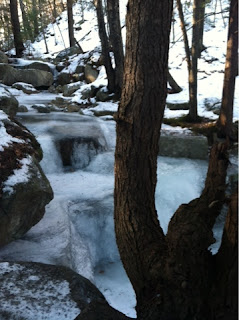 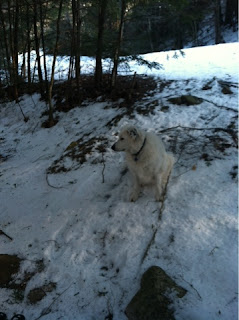 Posted by meetingbrook at 2:14 PM

a way that takes nothing for granted.


Dog barks toward place where deer were overnight. The big goofy German Shepherd’s bellow has a resonance that holds ears in awe.


Postmodernism is an intellectual approach used in fields such as literary theory, sociology, and architecture. Although the term describes a broad class of viewpoints, in general postmodernism rejects the ideas of absolute truth and objective reality. Rather, it emphasizes how we construct our apparent realities by describing them, particularly through language.1 A salient aspect of postmodern theory is the dense prose common to some humanities disciplines. Here is an example from a 1982 book entitled Powers of Horror: An Essay on Abjection by Julia Kristeva:


There looms, within abjection, one of those violent, dark revolts of being, directed against a threat that seems to emanate from an exorbitant outside or inside, ejected beyond the scope of the possible, the tolerable, the thinkable. It lies there, quite close, but it cannot be assimilated. It beseeches, worries, and fascinates desire, which, nevertheless, does not let itself be seduced.2

Philosopher John Searle once asked Michel Foucault why his writing was so obtuse, when he was so easily understandable in conversation. Foucault told Searle that 25 percent of one’s writing needs to be incomprehensible nonsense to be taken seriously by French philosophers.3 Although Foucault rejected the postmodern label, he did believe that knowledge was generated through operations of power and his attitude reveals the intent of postmodernism to deliberately obscure.4

I remember Robert Lowell’s description of preparation for teaching his class -- one that I recognize:


Only teaching on Tuesdays, book-worming
in pajamas fresh from the washer each morning,
I hog a whole house on Boston's
"hardly passionate Marlborough Street,"
where even the man
scavenging filth in the back alley trash cans,
has two children, a beach wagon, a helpmate,
and is “a young Republican."

(--from poem, Memories of West Street and Lepke, by Robert Lowell

Lowell died at 60 from heart attack:

On this day in 1977 the poet Robert Lowell died at the age of sixty in the back seat of a New York City taxi. He had hailed the cab at JFK airport and was heading up to West 67th Street, returning to his ex-wife, the writer Elizabeth Hardwick. He had just flown back from a disastrous trip to Ireland, where he had gone to explain to his present wife, the Anglo-Irish Lady Caroline Blackwood -- like Hardwick a writer, as well as heiress to the Guinness Stout fortune -- why their marriage was over. The meeting at Blackwood's estate outside Dublin had of course ended badly, with Blackwood storming out with her three children -- the son she had had with Lowell and two daughters from two former marriages, one to the painter, Lucien Freud (grandson of Sigmund Freud), one to the composer, Israel Citcowitz. At the end, Lowell still clutched in his stiffening arms one of Lucien Freud’s paintings of the young Blackwood, staring out from the canvas into the void.   http://www.todayinliterature.com/stories.asp?Event_Date=9/12/1977

Since There Is No Escape

Since there is no escape, since at the end

My body will be utterly destroyed,

This hand I love as I have loved a friend,

This body I tended, wept with and enjoyed;

Since there is no escape even for me

Who love life with a love too sharp to bear:

The scent of orchards in the rain, the sea

And hours alone too still and sure for prayer—

Since darkness waits for me, then all the more

Let me go down as waves sweep to the shore

In pride, and let me sing with my last breath;

In these few hours of light I lift my head;

Life is my lover—I shall leave the dead

If there is any way to baffle death.

It could be death has a new name, “Baffle Death.” Is there any way to baffle death, or is baffle death the way?

What if our ethics were to begin with a sit-down alongside baffle death? Yes, begin there. Say hello. Share pleasantries: nice day; some water? a piece of fruit? what have you been doing with yourself?

Then: What, knowing you, am I to do with my life? How understand and deal with the concept of ‘others’? Am I...them? Are they...me? (Can you imagine the attentive gaze of Baffle Death, perhaps a kindly grandmotherly raised eyebrows state of readiness to sit as long as it takes for you to come to terms, come to peace with whatever understanding arises in your encounter.) Perhaps this new acquaintance will pour tea, offer Lorna Doones, and ask after your family -- their health, projects, whether they have warm gloves for the cold weather.

Maybe Baffle Death has been misunderstood, been thought of as an enemy, an unkind stranger unwelcome in our neighborhoods. Maybe, after the sit-down, a new view might emerge. Something not far from what we’ve known as ‘faith.’

There is a strong vein of hostility against orthodox religious believers in America today, especially among the young. When secular or mostly secular people are asked by researchers to give their impression of the devoutly faithful, whether Jewish, Christian or other, the words that come up commonly include “judgmental,” “hypocritical,” “old-fashioned” and “out of touch.”

It’s not surprising. There is a yawning gap between the way many believers experience faith and the way that faith is presented to the world.

Rabbi Abraham Joshua Heschel described one experience of faith in his book “God in Search of Man”: “Our goal should be to live life in radical amazement...get up in the morning and look at the world in a way that takes nothing for granted. Everything is phenomenal. ...To be spiritual is to be amazed.”

And yet Heschel understood that the faith expressed by many, even many who are inwardly conflicted, is often dull, oppressive and insipid — a religiosity in which “faith is completely replaced by creed, worship by discipline, love by habit; when the crisis of today is ignored because of the splendor of the past; when faith becomes an heirloom rather than a living fountain; when religion speaks only in the name of authority rather than with the voice of compassion.”

Often when we’re amazed we’re baffled. And there is hardly anything more baffling than death. We save our biggest one word questions for death: Why? Where? When? Who?

Baffle Death stays still and silent when approached by these questions. She is not aloof. She is completely feeling what you are feeling. Only, in such unimaginable stillness and silence such as death, we imagine it to be somewhere else, a far, far distance from our understanding. A long expanse away from our abilities to profoundly enter within the unimaginable mystery of compassionate presence awareness.

Spirituality follows amazement along new pathways one step at a time.

Cold ice where water hardens.
Posted by meetingbrook at 11:07 PM

The metaphors of religion and scripture remind to look at what is now here as revelation in situ of story told as proleptic prelude.
If metaphor isn't this moment revealing itself, it was mere abstraction and dismissable. Now is the fulfillment of language. Grounding the specific and particular as touch of earth.
Else we dwell in vast ocean fullness of possibility -- silence as genesis -- standing ready to create existence as breath of God in and through and with what is coming to be.

“There must be a time of day when the man who makes plans forgets his plans, and acts as if he had no plans at all.

There must be a time of day when the man who has to speak falls very silent. And his mind forms no more propositions, and he asks himself: Did they have a meaning?

There must be a time when the man of prayer goes to pray as if it were the first time in his life he had ever prayed; when the man of resolutions puts his resolutions aside as if they had all been broken, and he learns a different wisdom: distinguishing the sun from the moon, the stars from the darkness, the sea from the dry land, and the night sky from the shoulder of a hill.”

Any second now.
We shall be.
Released.
Posted by meetingbrook at 4:51 AM

This doesn't mean to do nothing for which you can accrue blame.

It means live not blaming anyone anything.

No blame from you toward another.

As God is gazing.
Posted by meetingbrook at 10:06 PM

As wind chatters with trees


I am content when setting out on Sunday morning the few steps given me.

I wonder about this man. About the boat. What he was saying. How he cured. Why he cared.

The father at his boat must have felt abandoned. Or, at least, baffled.

I suspect the boat got overturned, set on cross workbenches, placed by stone wall by cabin, to rest a few months until time for refit.

We're left to wonder. Left to ponder mysteries of time and purpose, touch and sound.

Just stepping from one thing to another and straight ahead for whatever else appears for our imagination.

Posted by meetingbrook at 6:28 AM