what is there here

per = through; facere = to make or do

“The perfect man employs his mind as a mirror. It grasps nothing; it refuses nothing. It receives, but does not keep.” -Laozi

The "perfect" man or woman is one making their way through whatever arises before them.

They do through what is here.

There is no other place. One sees that to get from here to there is making oneself into what is there, that is, leaving no place to arrive at no other place, mirroring the merging and emerging as meeting places of an unbroken extension of mind, as unbroken mind extending itself where nothing is present and nothing is to be gained.

In other words, where you are is what is there here. 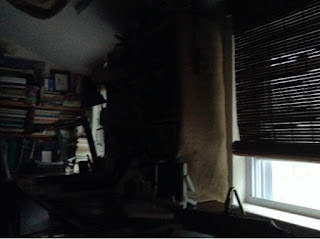 where philosophy meets zen as a taoist christian

Listen! Can you hear it?

I find this odd because we know exactly what consciousness is — where by “consciousness” I mean what most people mean in this debate: experience of any kind whatever. It’s the most familiar thing there is, whether it’s experience of emotion, pain, understanding what someone is saying, seeing, hearing, touching, tasting or feeling. It is in fact the only thing in the universe whose ultimate intrinsic nature we can claim to know. It is utterly unmysterious.

It is the sound of morning. Birds at edge of mountain. Sleeping dog growling in dream. Unmoving stillness of this room first day after submitting grades and becoming free to read again unrestrained. 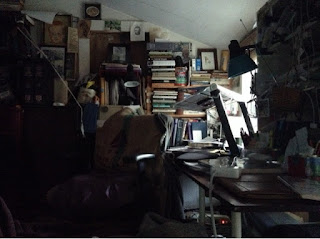 Tulku Urgyen Rinpoche, one of the great Tibetan Dzogchen masters of the last century, spoke frequently of recognizing the nature of mind—its empty, aware nature, free of any clinging to anything—for short moments many times. This can become a framework for understanding our own practice of letting go of craving: short moments, many times. As we do this, we learn to recognize and increasingly trust this place of ease.

Although there are different methods, vocabularies, and even metaphysical descriptions for the nature of ultimate freedom among the various Buddhist traditions, there is one common understanding of what frees the mind: liberation through non-clinging. This phrase is found throughout the Pali discourses and also in many of the teachings of the great Tibetan lamas and Chinese and Japanese Zen masters.

Patrul Rinpoche, a 19th-century wandering Dzogchen master of eastern Tibet, was much beloved by the ordinary Tibetans and known as “the enlightened vagabond.” He had some useful words about nonclinging in a teaching called “Advice from Me to Myself”:

For ages now you’ve been
Beguiled, entranced, and fooled by appearances.
Are you aware of that? Are you?
Right this very instant, when you’re
Under the spell of mistaken perception
You’ve got to watch out.
Don’t let yourself get carried away by this fake
and empty life.

Your mind is spinning around
About carrying out a lot of useless projects:
It’s a waste! Give it up!
Thinking about the hundred plans you want
to accomplish,
With never enough time to finish them,
Just weighs down your mind.
You’re completely distracted
By all these projects, which never come to an end,
But keep spreading out more, like ripples in water.
Don’t be a fool: for once, just sit tight. . . .

(- from, The End of Suffering, by Joseph Goldstein)

Consciousness, I imagine, is love's fate. Not either/or, but cohesive undifferentiation. Love is fate; fate is love. No evil intent. No manipulative overseer. The human mind without storytelling, rather, as untold experience not yet gathered into grammatical boxes.

People wonder what Christ or Buddha is. They wonder who God or their parents might really be. We wonder how the next insight might completely change our understanding of the very existence of morning, chickadee, and squirrel. 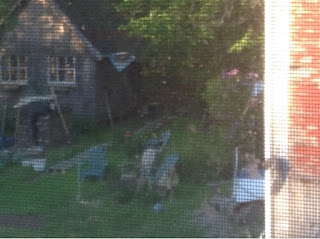 Or why we feel invited, no, compelled, to prayer within, mystical cohesion, mere affirmation and gratefulness.

The mythic sensibility of material sunlight whispering possibilities of spiritual inseparability one with another. 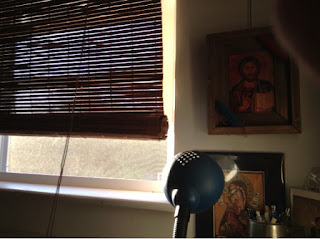 The natural slant of soul looking toward its original expression.

Words manipulate.
Music liberates.
Silence goes deeper than wherever within thought was bottom.
Posted by meetingbrook at 11:42 PM

It's just that the way culture in contemporary media perseveration regurgitates the seeming idiocy of depleted values, feels remarkably uninspiring.
But that's just tiredness, I'm sure, talking.
I'm sure things are not as ridiculous as they seem.
Posted by meetingbrook at 11:07 PM

Birdsong. Trucks and cars busy going elsewhere. Fact is, there is nowhere else.

How do we understand, No one is good but God alone?

What is God alone?

In back of church at morning prayer I sit solitude alone in silence.

The women pray up in the front to Mary, Jesus, and "No one is good but God alone" mysticism.

There is a cusp when hermits wander into town between bouts of emptiness and doubt.

And pray, as seen, in wooden pews.

Prayer without belief, an existential arrival at phenomenal appearance, as profound as God alone.

There's nothing else, no matter what the form, no matter how absurd, than the practice of prayer, alone with others.

That which drops mind and body into no time, no place, to be, with one another.

Kindness.
Posted by meetingbrook at 7:08 AM

I know why there's so little love in the world.
Love is powerless.
Posted by meetingbrook at 11:11 PM

inner, outer, and beyond

The notion of the Trinity is hard to fathom. One God. Three Divine Persons. Not to be collapsed or confused with one another. Easy, right? No, not easy.
Before I die, you would think, I'd want to know deeper this teaching -- how distinct and different correlate with interwoven unity. I don't know.
I don't.
No knowing makes things tolerable.
Like barking dog pleading for stick to be thrown.
A ceaseless investigation into our obtuse indifference and nondistinction.
A riven disunity.
We three might never meet again.
Posted by meetingbrook at 12:44 PM