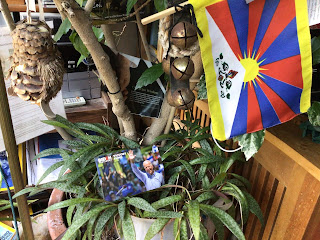 Posted by meetingbrook at 12:40 PM

A piece by Rumi:

This we have now
is not imagination.

This is not
grief or joy.

Not a judging state,
or an elation,
or sadness.

Those come
and go.

This is the presence
that doesn't.

It's dawn, Husam,
here in the splendor of coral,
inside the Friend, the simple truth
of what Hallaj said.

What else could human beings want?

When grapes turn to wine
they're wanting
this.

When the nightsky pours by,
it's really a crowd of beggars,
and they all want some of this!

This
that we are now
created the body, cell by cell,
like bees building a honeycomb.

(—from The Essential Rumi)

Posted by meetingbrook at 9:46 AM

with all his works and all his pomps

It’s a tragedy that it had to happen this way: so many people sick, thrown out of work by shutdowns, ruined by failed businesses and by failing governments, victims of all ages dead. People want to work again – but they need to be given new and better positions in a different kind of economy that’s the basis for a Green New Deal.

It was libertarian individualists and free market fundamentalists that got us into the climate crisis, and now a global public health crisis has exposed their impotence and the baseness of their ideas. Just as they ignored the warnings of the climate scientists, they now endanger their fellow citizens by refusing to listen to the experts in epidemiology.

Libertarian and faux populist leaders are aiming for a replay of the fiasco that followed the last big global upheaval, the financial crisis of 2008: bail out the big industries, and let ordinary taxpayers and ill-paid ‘necessary workers’ foot the bill. The richest 1 per cent are already profiting from the pandemic, and they desperately want to get the train of progress going again so that they can profit even more.6 Lockdowns preclude people from taking to the streets to protest such colossal injustice – but what if enough of us decline to reboard the train?

It’s time to resist ‘return to normal’, for the simple reason that our former ‘normal’ was on course to heat up the planet so much as to render it uninhabitable – or to make it so difficult to inhabit that only a fraction of the current world population would survive.7 The old normal was becoming lethal to the species, but the next normal needn’t be. The International Energy Agency has estimated that all the government restrictions in response to the pandemic could result in an 8 per cent drop in carbon emissions for 2020 – remarkably just what the United Nations Environment Programme says will be necessary every year for the next decade if we’re to prevent a temperature rise of over 1.5oC.8 That’s what we need, and we could manage it if we tried.

(—from Preface to How to Think About the Climate Crisis,  A Philosophical Guide to Saner Ways of Living, by Graham Parkes, c.2020)

Posted by meetingbrook at 4:00 AM

Of course it is sad that the White House has little interest and no will to restrain or contain the coronavirus.

The current occupant should fold it up and head home.

There’s no sympathy, no fond feelings, for or from the man or his surrounding aides.

We are bereft of affiliatory affection.

It is a desolate realization and a troubling transition to come.

Thank you, Donald Trump, for showing America that only you could lead the faithful few who would benefit from your interests.

Thank you, Joe Biden, for showing America that wide and common interests will be heard and respected under your leadership.

Posted by meetingbrook at 12:07 PM

not one could I find

In middle of night, when not much moves, prayer breathes..

You know how they taunt and deride me;

my oppressors are all before you.

Taunts have broken my heart;

I have reached the end of my strength.

I looked in vain for compassion,

for consolers; not one could I find.

Prayer is the end.

longing for sanity and good sense

It is coming down to crumbs and peanut shells.

Doom and gloom, grievance and accusation.

A nation longing for sanity and good sense waits under dripping water.

It is time to go to bed. Compline insinuates itself into prayerful mind.

Posted by meetingbrook at 9:57 PM

What does it mean to be a writer, asks the philosopher of critical theory?

What I do know is what I propose for inmate students whose classes are suspended for six weeks due to coronavirus.

We will address the battleground and tension of learning while dispersed with ADD+ILUCOTO.

A new code of learning for warriors of self/other inquiry.

Not difficult to be tired and anxious.

Less easy to cooperate in a collective action.

We vote then run back into our house.

The tired and anxious are difficult to soothe.

I must admit, it is curious to still be alive.

the invisible root, passion for the possible

In The Wake of Imagination, Richard Kearney shows that the concept of imagination has a complex genealogy in the Western tradition. In the Platonic corpus, imagination (eikasia) is nothing other than an imitation of the visible world, which is itself a mere shadow of the forms. Against Plato, Aristotle argued that “imagination [phantasia] is the process by which we say that an image [phantasma] is presented to us,” and that “the soul does not think without a mental image.” Imagination, in short, for Aristotle, was the passage between sense experience and reason. Nevertheless, Aristotle agreed with Plato that “imagination is mostly false,” and the Greeks, for the most part, used phantasma as a “reproductive rather than a productive activity . . . [an] imitation rather than origin” (WI, 12).

In a sense, the imaginatio of the Latin writers combines the meaning of the Greek phantasma with the negative connotations of the Hebrew yetzer. The latter term denotes a human creativity whose first use marked the fall of humanity into history. This creativity is a usurpation of the divine Yetzirah, and Adam and Eve’s eating the fruit of the tree of knowledge marked the beginning of time. By this action, humanity not only gained knowledge of good and evil but, just as important, also could remember the past and project itself into the future through its creative activity. The freedom of human beings, Kearney remarks, “to choose between good and evil, and to construct one’s story accordingly, is thus intimately related to the yetzer as a passion for the possible” (WI, 42).

(—from, p.18, Introduction: The Miracle of Imagining, by Peter Gratton and John Panteleimon Manoussakis, in TRAVERSING THE IMAGINARY, Richard Kearney and the Postmodern Challenge, c.2007)

In “On Stories and Mourning,” Paul Ricoeur argues that the notion of sorrow must be added to any discussion of narrative and action. Action, Ricoeur suggests, is coupled not just with narrative but also with “the work of mourning” elucidated in Freud’s essay “Mourning and Melancholia.” Ricoeur extends his meditation on mourning to the contemporary loss of authority in the political field, arguing that we must not “underestimate mourning” at the political level. Mourning, he argues, provides people with an ability to begin again “in such a way that we may overcome obsessive or compulsive repetition.” Marking the careful balance between memory and forgetting, Ricoeur notes that the “invisible root” of any community is the act of telling stories.. (Ibid, p.21)

In the morning, when imagination and mourning look out over bare trees and November pall, the possibility of sidling closer to each other with radical and intimate affection, upholds the faint but felt realization a new story desires to issue from our deep longing and emerge as nascent origin — to be what we are coming to be.

Posted by meetingbrook at 9:27 AM

what to do, now

Posted by meetingbrook at 6:02 AM

What do you think?

Posted by meetingbrook at 5:39 AM

Posted by meetingbrook at 10:39 PM

Posted by meetingbrook at 5:51 AM

all souls, her soul, four years ago

For all that has been,

For all that is to come,

Posted by meetingbrook at 4:48 AM

who from their labors rest

with patience forgiving what

Posted by meetingbrook at 6:03 AM

save nothing, delight everything

Time is what some say

it is a play without words

Posted by meetingbrook at 5:52 AM