a greater joy is required


St. Cecilia and John F Kennedy on November 22.  Both murdered in interval of nineteen hundred years.

I’ve been thinking about the illusions we negotiate. Like safety, security, and fairness.

Murdering will continue. Murderers fear. Only those with no fear wii not murder.

Fearful people are so difficult.

So willing to kill.

Let’s think about it.

Let’s be silent, hear the music of silence, and find courage not to kill.

Posted by meetingbrook at 10:23 PM

sentenced to, and sentencing, life


The student just said it, that, for Heidegger, Holderlin was the technology through which the river Ister became a poem presencing itself as sign and significance read and not lost.

Remarkably, an insight that entered the question of technology and unveiled what had been concealed.


The meaning that surfaces
comes to me aslant and
I go to meet it
word for word, until I am
everything at once.

(--Rita Dove, from her poem "Reading Holderlin on the Patio with the Aid of a Dictionary")

We joke that at a certain age one rewrites the narrative of one's life through a different lens. The difference between falling in love and failing in love becomes a single letter two letters away from each other (j,k).

The same student said she didn't like failure or the word failure. I held up the book by Kathryn Shultz, Being Wrong, and said there's something about failure we have come to oppose -- a dualistic foible -- and perhaps we might wish to question failure as to where it has come from and, more importantly, where it is going.

If we are a story being told (a story, being, told) why leave anything out?

Tell it, sentence by sentence, everything, at once!
Posted by meetingbrook at 5:51 AM


...what I couldn’t know in 1974 at George Washington Bridge Terminal where and when I purchased it. 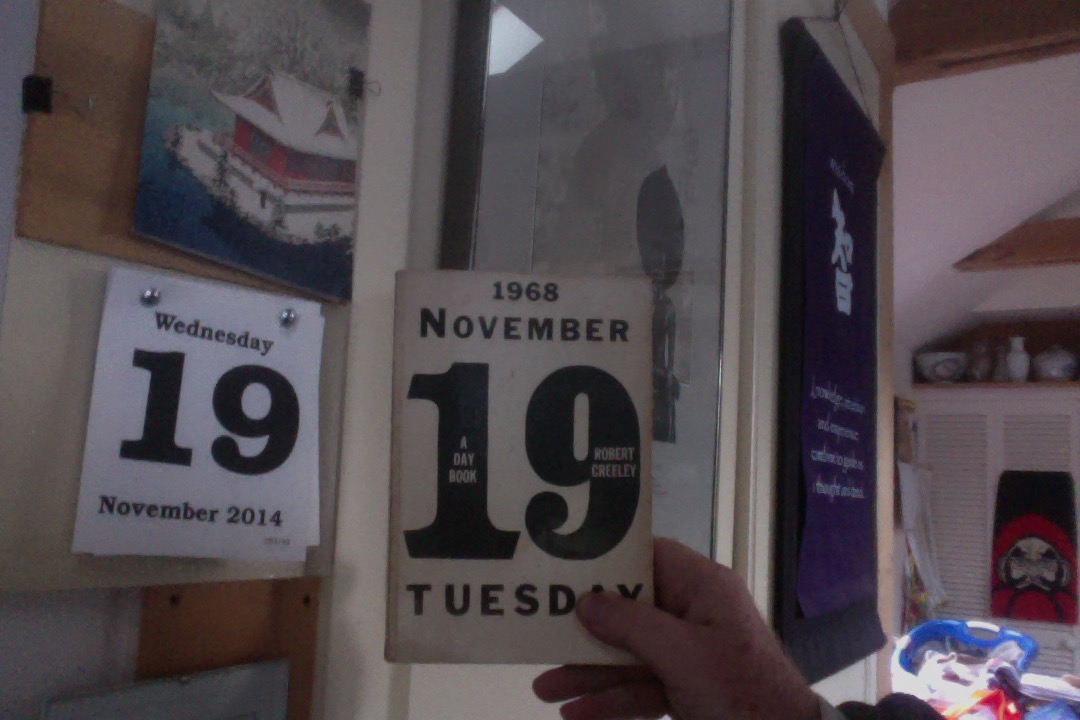 Posted by meetingbrook at 2:46 PM


Man from down the road at coffee this morning tells me of his flight returning from Japan ten days ago. There was very strong turbulence for well over ten minutes. Everyone had to fasten in. He had left his assigned seat to nap stretched-out strapped-in across an empty three seats up front.

The shaking and rumbling of the plane increased. He experienced concern, then fright, then fear. It was then that a mantra came to him. He repeated it again and again. Something shifted for him.

Here’s the mantra he composed:


This is singing
There’s nothing to fear
We are all

Curiously, he was ok after his recitation.

His mind was not turbulent. Or, perhaps, it was not separated from the outside turbulence.

When he got up and ricocheted down the aisle the fastened flight attendants scolded him his movement.

He returned to his seat next to his wife.

He took her hand.

The plane continued to Chicago.
Posted by meetingbrook at 2:35 PM

Walking farm field in Oxford Maine yesterday, I wondered how to pray.

And asked.
Posted by meetingbrook at 4:24 AM


"Art in time opens the soul to the numinous light of receiving the vision of the unjudged, with it comes compassion and well-being." (--Robert Hake, from Art in Time, a Clarity blog), http://clarityposts.blogspot.com/2014/11/art-in-time.html

If someone asks what practice emerging from 21st century buddhist/christian interbeing is worth our time, tell them it is the vision of the unjudged practicing unjudging seeing.

Practice, like history, moves with time and circumstance. The flaws of the past nod to evolving reparation of moment, allowing transformation.

Leaving for Ellsworth, snow.
At Good Will store, hail.
To Machias and back, rain.
In bed, weary.
With sleep, dreams.
Posted by meetingbrook at 10:38 PM

(a haiku)
One belief beheads
Another
Hell with no hope --
No one asks why;
Why?
Posted by meetingbrook at 5:40 AM