(for brief friend sitting with him after his death)

Posted by meetingbrook at 6:52 PM

the nothing that concerns itself with us

What is the nothing that concerns itself with us?

Nishida Kitarō initiated his philosophy of place (basho 場所) in 1926 with the ontological premise that to be is to be implaced (Z3 415).1 Things are predicated upon the concrete place of their being. Initially this place was sought within and below the interior depths of consciousness as encompassing the subject and object of cognition. But through the 1930s Nishida turns his gaze outward to the socio-historical world (shakaiteki rekishiteki sekai 社会的歴史的世界) as the environing horizon of things. The further one inquires into the placial conditions of being whether internally or externally, however, the horizon recedes without provision of the ultimate why of beings. The metaphysical absolute in that sense, for Nishida, withdraws into the darkness of in- definition. The ultimate wherein of beings, undelimited and undifferentiated, thus proves to be a nothing(mu無). Nishida famously designated this t he“place of absolute nothing”(zettaimuno bahso 絶対無の場所). It is a place that eludes positive description at its most concrete level, and yet in its very no-thingness, opens the space for—and envelops—things in their mutual differentiations, delimitations, and oppositions. Now from the very inception of this theory of place, Nishida spoke of this dimension as the “religious” (shūkyōteki 宗教的). He meant this in the sense that one encounters therein one’s existential nullity via death that finitizes one’s being vis-à-vis the nothing.

But by1945 Nishida has come to depict the other that finitizes one’s being in conspicuously religious terms, using both Buddhist and Christian concepts. By this time his characterization of this place of absolute nothing as “God” (kami 神) or “the absolute one” (zettaisha 絶対者) becomes pronounced and frequent

There's nothing passing just now between this meditation cabin and the green yurt up by the brook. Yesterday five deer curled to the land next to hermitage and crossed Barnestown Road. It is hunting season. Shots can be heard.

This morning's practice held everyone close in gratitude and appreciation of love and compassion.

There is nothing between us and within us.

If you feel things should be other than they are, think nothing of it.

There are, and will be, for us, practices of allowing to be that which longs to be a place of repose, repair, and realization of the nothing within us and the nothing without. 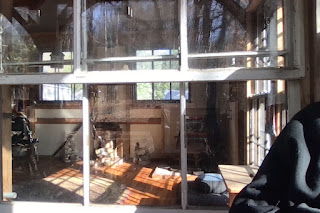 Posted by meetingbrook at 10:55 AM

the difference a day makes

I listen to him

breathing, the struggle, each breath

There’s no there there

Here is the sole reality

Here is w-here you are

You are the creativity of the cosmos

You are being written

You are the poem of what longs to be written real

Be what is here

The poem is being written

Every instant is the origin of learning

Posted by meetingbrook at 6:53 AM

Here’s a poem
Posted by meetingbrook at 10:25 PM

prayer is becoming one’s own self

To engage emptiness, that open space between organized religion and personal expressions of the sacred, we step into the mirror, or the “One Mirror.” What does it mean to step into the mirror? It means that all reflecting-of-other is done away with. It means that there is no you, no I, to be reflected back. This is not an eradicating or destruction of what we typically think of as “me” – rather, it is a recognition of our true identity, what Jung called the Selbstverwirklichung, “the Self realizing itself.” Jung wrote in “Conscious, Unconscious, and Individuation,” in theArchetypes and the Collective Unconsciousness, that:

Individuation means becoming a single, homogeneous being, and, in so far as “individuality” embraces our innermost, last, and incomparable uniqueness, it also implies becoming one’s own self. We could therefore translate individuation as “coming to selfhood” (zum eigen Selbst werden, “becoming one’s own Self”) or “self-realization” (Selbstverwirklichung, “the Self realizing itself”).

If stepping into the mirror were possible, would it be a desirable thing to do? And even if desirable, who would do it?

Posted by meetingbrook at 7:28 AM

Saints, preserve and protect us!

You ask me how to pray to someone who is not.

All I know is that prayer constructs a velvet bridge

And walking it we are aloft, as on a springboard.

Above landscapes the color of ripe gold

Transformed by a magic stopping of the sun.

The bridge leads to the shore of Reversal

Where everything is just the opposite and the word ”is”

Unveils a meaning we hardly envisioned.

Notice: I say we: there, every one, separately,

Feels compassion for others entangled in the flesh

And knows that if there is no other shore

We will walk the aerial bridge just the same.

We are wonderfully different, and just the same, all at once.

Posted by meetingbrook at 7:09 AM

yes it is thinly understood

In prison conversation he said in his tradition the 31st is a day not a day and a night not a night.

It is a between. Between time. Between place. Between end and beginning.

Then the wonderful ambiguous and varied phrasing: “It is all about me.”

Think of that phrase’s meaning traveling in many directions at once.

In “The Thin Place” of All Hallows’ Eve, All Saints Day, and All Souls Day, the worlds of the known and the unknown are only thinly separated.

It is a rare invitation to all integrity-loving people.

Let’s take that time to reevaluate and reconstitute our commitment to living without separation and without exclusion with our familiars and vast families nearby and worldwide.

It’s a perfect time to clear and change our hearts.

Posted by meetingbrook at 11:41 PM

conclusions they do not care about or watch

Sometimes a poem inadvertantly captures the zeitgeist of a country and a time in such a way as to send shivers.

Form is the woods: the beast,

a bobcat padding through red sumac,

the pheasant in brake or goldenrod

that he stalks—both rise to the flush,

the brief low flutter and catch in air;

and trees, rich green, the moving of boughs

and the separate leaf, yield

to conclusions they do not care about

the spoor of feathers

Perhaps a stark variation on "form is emptiness, emptiness is form" of the Heart Sutra.

This is our self.

Posted by meetingbrook at 11:14 AM

his month, his mere quiet looking around

All along the way

It has been Francis, no place

No clique no secret handshake —

Just that guy nowhere but here

Showing up passing through glance

Posted by meetingbrook at 6:23 AM