Francis of Assisi, Meetingbrook chapel/zendo, October 4th, on his feastday: 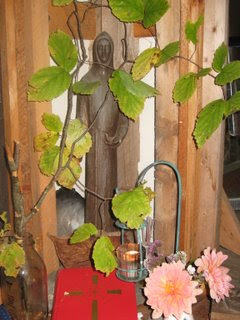 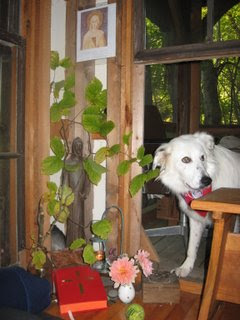 And up by tent, stalking tennis ball: 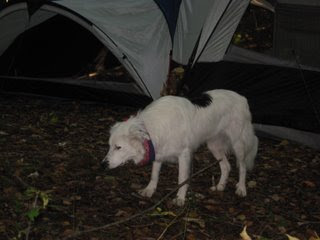 Finally, on bridge at brook with his kind friend. 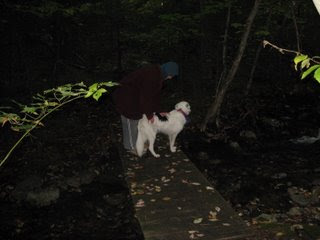 A confluence of sweet events of a single day!
Posted by meetingbrook at 9:53 PM

When the man in tie-died shirt asked, I said, "He was a nature mystic. He saw God in everything. In everyone."

It's why Francis transcends all explanation. He was where God wished to be.

He gave up. Entered innocence.

Others thought they knew.

Francis.
Posted by meetingbrook at 10:32 PM

Etymology: The word "angel" in English (from Old English and German Engel), French (from Old French angele), Spanish, and many other Romance languages are derived from the Latin angelus, itself derived from Koine Greek: angelos, "messenger" The ultimate etymology of that word in Greek is uncertain.[2]

In Hebrew & Arabic the primary term for "angel" is "malakh", "malaika", or "malak" (derived from the Semitic consonantal root l-'-k, meaning "to send." This root is also found in the noun "Melakha", meaning "work", and the noun "Mal'achut", meaning "message". Other words referring to angels include kruv[3] describing young children, from which the English word "cherub" is derived. Another Hebrew term is Gil-Gulim, meaning "revolving," and angels are sometimes depicted as wheels with wings. Derived from this is the Hebrew term "Gal-Gal," "the rotation of fortune, change."[4]
(--Wikipedia)

What if "angel" was the word we use for the unbroken connection extending throughout all of existence -- all of being -- between what we call the Holy and what we call Ourselves? In other words, "angel" is the communicative intuitive remembering of wholeness, going to origin, open flow of awareness with no diversion.

Isolate and full, the moon
Floats over the house by the river.
Into the night the cold water
Rushes away below the gate.
The bright gold spilled on the river
Is never still.
The brilliance of my quilt
Is greater than precious silk.
The circle without blemish.
The empty mountains without sound.
The moon hangs in the vacant, wide constellations.
Pine cones drop in the old garden.
The senna trees bloom.
The same clear glory extends
For ten thousand miles.
- Tu Fu (712-790)

It is not yet easy to dwell in the understanding that all is inseparate and of a piece. We deal with spatials and temporals. There is an 'out there' and an 'in here' in our designations. The prospect that there is only 'here' and that every point along the line, every pause around the circle, is every other point, every other pause -- even while positing the opinion that there is no 'other' -- intrigues us and astounds us.

In our myths, in the stories we speak out of the silence of 'not knowing', we attempt to draw a sketch of our longings and fears.

Gabriel (the name means "God is my champion") is thought of as the special bearer of messages from God to men. He appears in Daniel 8:16; 9:21 as an explainer of some of Daniel's visions. According to the first chapter of Luke, he announced the forthcoming births of John the Baptist and of our Lord to Zachariah and the Virgin Mary respectively.

Raphael (the name means "God heals") is mentioned in the Apocrypha, in the book of Tobit, where, disguised as a man, he accompanies the young man Tobias on a quest, enables him to accomplish it, and gives him a remedy for the blindness of his aged father.

Uriel (the name means "God is my light" -- compare with "Uriah", which means "the LORD is my light") is mentioned in 4 Esdras.
(--from Michael and All Angels, Sept 29, http://satucket.com/lectionary/Michael.htm)

Rain drenches earth this celebration of angels. In Catholic tradition 29Sept is designated for the Archangels and 2Oct is for the Holy Guardian Angels. In a time of discouragement and disillusionment we long for equanimity and poise in the face of what is presenting itself.

It matters that we attempt to become and remain alert.

Every human and sentient being, every stone and molecule of air, water, mineral, and empty space -- we are all intertwined and interconnected.

Angels preserve us!
Posted by meetingbrook at 8:32 AM

On zafu at first light.

For no reason it rains,
Whispers of reality.
How lovely it sings,
Drop by drop.
Sitting and lying I listen
With emptied mind.
I don’t need ears,
I don’t need rain.
- Chin’gak

Cat comes in from rain.
Posted by meetingbrook at 11:42 PM

Where gather mists and clouds,
A happy world.
Thick swirls of incense smoke
Wreathe Heaven’s Gate.
The bell of Prajna chimes
Through vacant days.
Amida’s sutras are one
On quiet nights
Brooks sigh and sing
Like harps when rain has stopped.
Birds chirp sweet melodies
As sunshine dims.
The Way lies not far off-
Why toil for it?
Bodhi bears fruit
Right here inside the heart.
- Huynh Sanh Thong

Michael Moore's film, Slacker Uprising, ends with REM's "Its The End Of The World As We Know It (And I Feel Fine)".

It's free to see.

So lucky.
Posted by meetingbrook at 11:00 PM

Bailout plan fails in House of Representatives. One candidate blames the whole thing on the other. It could be funny, the blaming. No one is laughing. These people could possibly be president and vice-president. There's not much light.

A dash of rain upon
The lotus leaves. But the leaves
Remain unmarked, no matter
How hard the raindrops beat.
Mind, be like the lotus leaves,
Unstained by the world.
- Chong Ch’ol (1536)

These are serious times. Economic crisis. Leadership crisis. War and intelligence crisis. Makes you want to go off and listen to loons deep into the night.

People We'd Rather Avoid
Metta (lovingkindness) is to be extended towards all beings and all manifestations, yet most of our difficulties lie with people. It is much easier to love birds, dogs, cats, and trees than it is to love people. Trees and animals don't answer back, but people do, so this is where our training commences. . . . Sometimes people find they don't feel anything while practicing metta meditation. That is nothing to worry about; thoughts aimed often enough in the right direction eventually produce the feelings. All our sense contacts produce feelings. Thoughts are the sixth sense, and even if we are only thinking metta, eventually the feeling will arise. It is one means of helping us to gain this heart quality, but certainly not the only one.

In our daily activities all of us are confronted with other people and often with those whom we would rather avoid. These are our challenges, lessons and tests. If we consider them in that manner we won't be so irritated by these experiences. . . . When we realize that such a confrontation is exactly what we need at that moment in order to overcome resistance and negativity and substitute metta for those emotions, then we will be grateful for the opportunity.
(--Ayya Khema, in When the Iron Eagle Flies)

Where shall I go? How far can I go? And when I arrive -- what then? Where will I be?

all ignorance toboggans into know

all ignorance toboggans into know
and trudges up to ignorance again:
but winter's not forever,even snow
melts;and if spring should spoil the game,what then?

all history's a winter sport or three:
but were it five,i'd still insist that all
history is too small for even me;
for me and you,exceedingly too small.

It's too much to think about.
Posted by meetingbrook at 10:54 PM

Cat in from out. Up on bed. Dog sticks nose in.

There's no authority says I'm anything other than what I'm not. So I remain anonymous.
Outside.

Where I belong.
Posted by meetingbrook at 10:36 PM