about afterthought, dialogue with student

COLLAPSE
Posted by meetingbrook at 10:41 PM

I hereby announce the creation of a new revolutionary movement: Stat Virtus.

Derived from the saying In medio stat virtus (virtue stands in the middle).

For members of Congress, the Executive, and the Judiciary, the invitation to engage in revolutionary behavior and wander to Stat Virtus.

There, away from separated edges, in the focused surround of centered middle, work will be done to pragmatically attend to problems and questions related to citizens of their country and citizens of the world.

We are saved from unthinking ideology.

A heartbeat of necessary creation is felt.

This feeling-thinking is how truth moves within us transforming everything it touches in extension.
Posted by meetingbrook at 10:11 PM

...when we talk of nirvana we imagine that there is such a thing...as in the case of a table or a book. Nirvana, however, is no more than a state of mind or consciousness when we actually transcend relativity—the world of birth and death.

life!
Posted by meetingbrook at 11:28 PM

are we nearly there

“When you’ve robbed a man of everything he’s no longer in your power—he’s free again.”
—Alexander Solzhenitsyn
Posted by meetingbrook at 7:56 AM

The value of words in the world of this administration has mouths uncertain whether or what to pronounce.


I should never have learned words
how much better off I’d be
if I lived in a world
where meanings didn’t matter,
the world with no words

(-Ryūichi Tamura in poem “On my Way Home”)

So it is when mendacity is the weapon of top officers in any branch of government.

There was a time when facts were considered to be truth. Then it became that interpretation of facts might be considered accurate or inaccurate, hence, truthful or untruthful. Now, it seems, that truth is dependent upon the forceful persuasive opinion of those espousing a particular point of view.

The zen master says that "Truth...is just like this." But the meditation of the practitioner is asking the question, "What is this?"

Things are further compounded by the realization that things are seldom what we think they are.

What am I left with?

No words suffice!
Posted by meetingbrook at 7:40 AM


"[A publisher asked me to write something on 'The Secret of Success,' and I refused.]
If I had a message to my contemporaries, I said, it was surely this: Be anything you like, be madmen, drunks, and bastards of every shape and form, but at all costs avoid one thing: success. ... If you have learned only how to be a success, your life has probably been wasted. If a university concentrates on producing successful people, it is lamentably failing in its obligation to society and to the students themselves."

(--from posthumous publication, 1980 Love and Living, Thomas Merton, a collection from his writings.

We're no longer certain about the circumstances of his death.

Recently he's been called a martyr.

As Bob Dylan wrote: "There's no success like failure / and that failure's no succes at all." (in Love Minus Zero/No Limit, 1965)
Posted by meetingbrook at 11:42 PM

cages, where our morality has disappeared


This is the Nativity display outside the Claremont United Methodist Church in California.
It's making some people very upset. And it should. 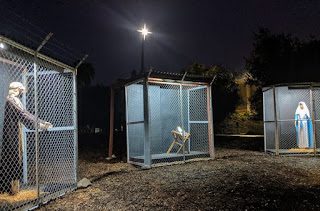 It’s all happening now.
Posted by meetingbrook at 4:46 PM

In out-of-the-way places of the heart,
Where your thoughts never think to wander,
This beginning has been quietly forming,
Waiting until you were ready to emerge.
For a long time it has watched your desire,
Feeling the emptiness growing inside you,
Noticing how you willed yourself on,
Still unable to leave what you had outgrown.
It watched you play with the seduction of safety
And the gray promises that sameness whispered,
Heard the waves of turmoil rise and relent,
Wondered would you always live like this.
Then the delight, when your courage kindled,
And out you stepped onto new ground,
Your eyes young again with energy and dream,
A path of plenitude opening before you.
Though your destination is not yet clear
You can trust the promise of this opening;
Unfurl yourself into the grace of beginning
That is at one with your life’s desire.
Awaken your spirit to adventure;
Hold nothing back, learn to find ease in risk;
Soon you will be home in a new rhythm,
For your soul senses the world that awaits you.
https://thevalueofsparrows.com/2012/12/12/poetry-for-a-new-beginning-by-john-odonohue/
Posted by meetingbrook at 9:28 AM

This mendicant day begging for interconnection.

Two wonderful examples of being free from barrier and boundary.

Mary conceived as such.

And, with equal note, the anniversary of John Lennon’s sudden and shocking moving through perceived barrier and boundary at the hands of a very harsh teacher in 1980. such as it was.

How remarkably and unexpectedly beneficial, beyond our comprehension, that we have been given the ability to both remember and re-member such gifts as these along our expansion across time and across the universe!

With profound gratitude!
Posted by meetingbrook at 7:57 AM