Fog tops Bald Mountain. I am back in Merton Retreat after 3 months. Guest brings card with Ho Tai raised arms, "Yes" it says. He's found a place. He's moved on. We wish him well.

I read Mary Tillman's Boots on the Ground, My Tribute to Pat Tillman. Her son died, the story goes, as a result of 'friendly fire' in Afghanistan, April 2003. It is a sad tale. Much that the family had been told was lie after lie. I am surprisingly moved, over and over, by the story.

How rich are the depths of God – how deep his wisdom and knowledge – and how impossible to penetrate his motives or understand his methods! Who could ever know the mind of the Lord? Who could ever be his counsellor? Who could ever give him anything or lend him anything? All that exists comes from him; all is by him and for him. To him be glory for ever! Amen. (Romans 11:33-36, Reading from Office of Evening Prayer)

Rokpa gets to go on two walks. The hermits are working solitarily this damp and rainy day. It is a good day to be an anchorite.

Anchorite: (female: anchoress; adj. anchoritic; from Greek: ἀναχωρέω anachōreō, signifying "to withdraw", "to depart into the rural countryside") denotes someone who, for religious reasons, withdraws from secular society so as to be able to lead an intensely prayer-oriented, ascetic, and—circumstances permitting —Eucharist-focused life. As a result, anchorites are usually considered to be a type of religious hermit, although there are distinctions in their historical development and theology. (--from Apple dictionary)

The rural countryside is dusked.

Not much can be seen when light fades.

In his commentary on the Sandokai, Shunryu Suzuki suggests that our effort for today is good-enough dharma; that tomorrow we will try again to make even better effort in the dharma.

So it is when I think about the pain of the Tillman family, and the many other families who've been told untruths about their loved-one's death in war zones. The pain for them is doubled -- the curious lack of respect in the name of some more vague objective on the part of those perpetuating the lies.

Tomorrow, perhaps, we will make a nobler effort to honor those dead in war with honest respect.

These brothers and sisters of ours gone to war, gone to death, gone from us!

We think the mind of the Lord is difficult to comprehend.

The mind of man is far and away beyond difficult.
Posted by meetingbrook at 8:26 PM

John had a sense.

To keep his promise, God has raised up for Israel one of David’s descendants, Jesus, as Saviour, whose coming was heralded by John when he proclaimed a baptism of repentance for the whole people of Israel. Before John ended his career he said, ‘I am not the one you imagine me to be; that one is coming after me and I am not fit to undo his sandal.’ Acts 13:23-25
(--from Evening Prayer, Feast of the Birthday of John the Baptist)

The ego before the revelation of the true self is not the one that is coming after 'me'. That one, that true self, the ego cannot approach, cannot touch. 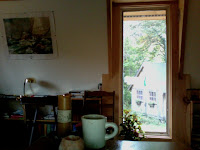 We have that sense too.

But to trust in it, to allow the going to be gone, that is the practice.

The conversation seemed to ask whether ‘God’ is a supernatural way of being that assumes form to participate in life within this creation, or, if what we call ‘God’ is the hinting wisdom of human interconnection with all of nature and particularly human nature to work toward the accomplishment of beneficial results.

It influences the search for God.

As though God has gotten lost.

Posted by meetingbrook at 10:46 PM

In Ireland a woman in her 80s falls and breaks her femur. It is replaced. Her son phones and checks on her. She will heal. That's good to hear. 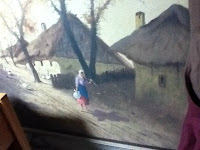 Elsewhere, a guest leaves without a word after a three month stay. When my father left, he with death 37 years ago today, a silence with deeper stillness ensued.

Such departures remind of transience and curiosity. Christ comes and Christ goes. Everything is to be received with mystery and allowed to go with gratefulness. Understanding and certainty are not always traveling companions.

What's there to look for?

That should be enough.
Posted by meetingbrook at 11:04 PM

There’s laundry for outdoor line. Rokpa opens his eyes to see what the movement is. The green shade is lowered. Today begins summer. We prepare pea pod to return to harbor. We paddle canoe at dusk last evening on Hosmer Pond in profound gratitude for our nature, God’s nature, nature itself 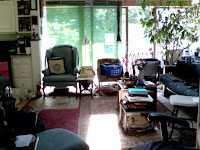 The wind is still,

Birds sing in the

Quiet of the mountain.

This is Kannon's wondrous wisdom: Ah!

At liturgy thus morning there is an invitation to do what we’d like to see and thus to be. The celebrant suggested it is not merely a matter of not doing to others what we’d not like to be done to us -- but to actively treat others as we would like to be treated.

Fair enough. Confucius was wise, but Jesus, he might be suggesting, embodied the wisdom. It might be a highly nuanced observation, but the conversation is not sabotaged by making the distinction. Here, quod erat demonstrandum, the conversation finds itself written and pondered.

POEM WITHOUT A TITLE

I say to the lead

Why did you let yourself

Be cast into a bullet?

Have you forgotten the alchemists?

Have you given up hope

In turning into gold?

The sleep is deep and long.

The sleep is deep and long. It is a curiosity that so much effort is placed in making bullets, muzzles, grenades, bombs, missiles, fighter jets, Apache helicopters, black ops, and stealth destruction.

And we are intelligent beings. There is some wisdom.

We’ve got to stop preferring abstraction and idealization and come to earth, embodying wisdom, living as if we truly believed in life.

I’d prefer to step into this creating attention within life on this earth.

Posted by meetingbrook at 11:38 AM

When Pat Tillman was killed by his own men, there and then the war in Afghanistan ended. The charade began. That was April 22, 2003. Today is June 20, 2011. The charade has continued for 8 years and two months. Would that the American people weren't so easily fooled.

When you praise worthy people, you make other people envious and quarrelsome.
When you value rare things highly, you turn honest people into thieves.
If you show people exciting things, you will make them covetous and greedy.
The wise rule by keeping the peoples' hearts empty (of desire) and their bellies full.
Making their bones strong and their ambitions weak.

Since the people are free of avarice and desire,
even the most cunning grifter has no opportunity to corrupt them.

By using the "act without action" principle,
everything just falls into place.
(ch.3, Tao Te Ching)

War is a lie. Inside the lie a deeper deception takes place -- a charade that says this is a glorious undertaking, heroic adventure, a decorous and patriotic pleasure to die in the service of your country.

Many have so died. I lament their deaths. I salute them.

But I look on those that send men and women to war with a skeptical wariness about the explanations and reasons put forth for the wars.

The charade captivates and enthralls.

We swallow the drugs and pass out.

We desperately need to come to!
Posted by meetingbrook at 11:06 PM

James Finley talks about God being the air he breathes and moves through.

Because you grasp labels and slogans,
You are hindered by those labels and slogans,
Both those used in ordinary life and those
Considered sacred.
Thus they obstruct your perception
Of objective truth,
And you cannot understand clearly.
- Linji (d. 867)

Thich Nhat Hanh writes a gatha: Breathing in, I know I am breathing in.

Being within God -- clearly, no label.

Breathing out, Thay says, we smile.
Posted by meetingbrook at 10:27 PM