To be is to be conscious here


Light illumines Christ and the Bodhisattva beside wisdom this Saturday morning. 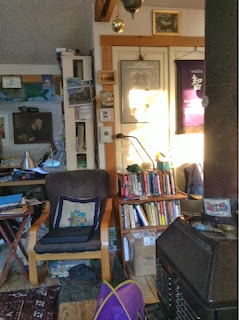 Last night a roomful of conversation wondered with Nisargardatta about being "that." 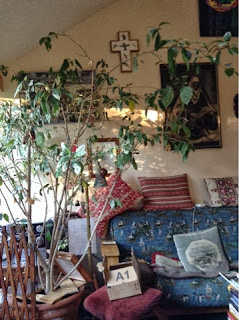 This morning, no one here, is good example how to read God.
Posted by meetingbrook at 7:14 AM

For theists, the word "god."

For non-theists, the word "reality."

What is anything ever but "itself?"


"The mind being interested in itself is what makes consciousness."   (--John Tarrant, from A Beautiful Wish, Shambhala Sun, Sept.2013)

This is what makes consciousness: mind, being, interest; in itself.

For nothing else, because there isn't anything else.

Just itself -- with, through, in, everything as itself.
Posted by meetingbrook at 11:31 PM


At prison we spoke about Othello, John O'Donohue poems, John Tarrant article in Shambhala Sun, while Rokie chased a blue ball from person to person.


This is an insight from the ancient Christian tradition of prayer which understands the deeper connections beyond request and response. Though not all prayer is petitionary, because of the mystery of the Incarnation all prayer is intercessory; the divine pattern is for human beings to be channels of grace to one another.

Monasticism focuses and concretizes this insight for the Church. Our call is to become channels of blessing for the world by making ourselves more and more available for God’s action in and through us. Through the humility of deep prayer we are able to penetrate beyond the false self to our true centre, where God is always waiting. We prostrate ourselves interiorly, offering ourselves to God for the world. And God distributes gifts in our name, without our ever knowing where or how. Thomas Merton wrote: “In the economy of God’s grace you may be sharing his gifts with someone you will never know until you get to heaven.”(from, Conversatio morum, "Will the Christian of the future be a mystic," 9 January 2008.  Conversatio morum is a Latin phrase often translated ‘conversion of life’ or ‘reformation of life’). http://cthornby.wordpress.com/2008/01/09/will-the-christian-of-the-future-by-a-mystic/

Who, we wonder, is touched by a conversation at unspecified distance?

Antonio leaves in a few days. He will be accompanied by O"Donohue.

And our prayer.
Posted by meetingbrook at 3:27 PM

Othello's had a mind to poison.

Desdemona --
Posted by meetingbrook at 10:40 PM

I wake from sleep and take (my walk) slow

Stay with what you know. That's remarkable wisdom. 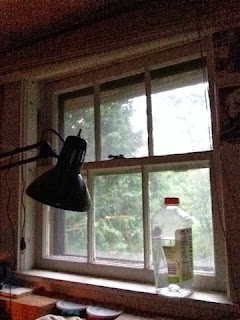 He had no place to stay.

Water in plastic container on windowsill Thursday morning in Maine seemed like a good place to start.

This is not a dream, he thought. This is water in light of day.

Nothing was so refreshing.

Spiegel im Spiegel, mirror in mirror, piano and violin, by Arvo Part the Estonian composer, rounds consciousness reflecting through itself.
Posted by meetingbrook at 11:32 AM

Frost said it made "all" the difference.

His choice.
Posted by meetingbrook at 11:56 PM

I'm told a man I know worries his heart is in need of medical attention. In five months he'll turn 65. Insurance kicks in. I trust he'll make that visit.

Medical care and health issues, money or insurance to pay for attention, are not always in the same place at the same time.

Here's another didactic little story. There are these two guys sitting together in a bar in the remote Alaskan wilderness. One of the guys is religious, the other is an atheist, and the two are arguing about the existence of God with that special intensity that comes after about the fourth beer. And the atheist says: "Look, it's not like I don't have actual reasons for not believing in God. It's not like I haven't ever experimented with the whole God and prayer thing. Just last month I got caught away from the camp in that terrible blizzard, and I was totally lost and I couldn't see a thing, and it was 50 below, and so I tried it: I fell to my knees in the snow and cried out 'Oh, God, if there is a God, I'm lost in this blizzard, and I'm gonna die if you don't help me.'" And now, in the bar, the religious guy looks at the atheist all puzzled. "Well then you must believe now," he says, "After all, here you are, alive." The atheist just rolls his eyes. "No, man, all that was was a couple Eskimos happened to come wandering by and showed me the way back to camp."

Enjoy that cup of coffee. The scone. The passing color and shape of face, gate and form, drifting past your eye.

The looking out over harbor from parked car waiting for next consult with health resource.

Looking for way back to camp. 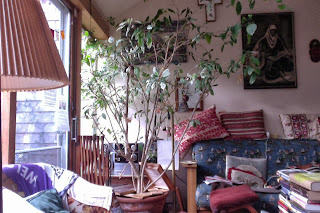 Posted by meetingbrook at 8:25 AM

That's it for summer.

(--from Theoria  Praxis  Poiesis Individualization as the constitutionof sociality, by Matti Vesa Volanen.To be presented by permission of the Philosophical Faculty of the University of Eastern Finland... http://ktl.jyu.fi/img/portal/22546/T028.pdf

One phrase, a sentence, or paragraph, sometimes just simply says it. Language unveils as well as conceals.

Watch what you write. Hear what you say. Small inferences change human history in powerful ways.
Posted by meetingbrook at 11:03 PM

Old friends, theatre of the absurd companieros, dance down corridor of senseless expostulation to corner turning into nothing known.


While Hamm and Clov are in the "endgame" of their ancient lives, with death lurking around the corner, they are also stuck in a perpetual loop that never allows final closure—Hamm claims he wants to be "finished," but admits that he "hesitate[s]" to do so. Just as death cannot arrive to seal off life, neither can Hamm or Clov escape to close the book on one existence and open another—note Clov's frequent failed attempts to leave the room (and his final return after vowing to leave) and Hamm's insistence on returning to the center of the room. Nell's death may be an aberration in a play where death seems impossible, but since she is the one character who recognizes the absurdity of the situation, perhaps she is rewarded by dying.

It is worthy thought: you see absurdity, you get to die.

Opt not for long life. Choose happy lack of illusion. 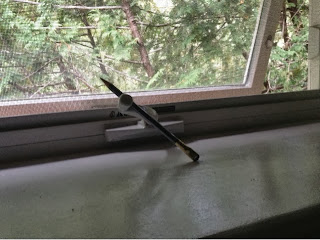 Posted by meetingbrook at 3:30 PM