BY WALLACE STEVENS
One must have a mind of winter
To regard the frost and the boughs
Of the pine-trees crusted with snow;
And have been cold a long time
To behold the junipers shagged with ice,
The spruces rough in the distant glitter
Of the January sun; and not to think
Of any misery in the sound of the wind,
In the sound of a few leaves,
Which is the sound of the land
Full of the same wind
That is blowing in the same bare place
For the listener, who listens in the snow,
And, nothing himself, beholds
Nothing that is not there and the nothing that is.

Posted by meetingbrook at 6:54 PM

What My Father Believed

He didn't know about the Rock of Ages

or bringing in the sheaves or Jacob's ladder

or gathering at the beautiful river

that flows beneath the throne of God.

either, and didn't know the purpose of life

was to love and honor and serve God.

He'd been to the village church as a boy

in Poland, and knew he was Catholic

because his mother and father were buried

in a cemetery under wooden crosses.

His sister Catherine was buried there too.

to the kitchen corner where the stove sat,

and cried. She wouldn't eat or drink, just cried

until she died there, died of a broken heart.

She was three or four years old, he was five.

What he knew about the nature of God

and religion came from the sermons

the priests told at mass, and this got mixed up

with his own life. He knew living was hard,

and that even children are meant to suffer.

Sometimes, when he was drinking he'd ask,

"Didn't God send his own son here to suffer?"

My father believed we are here to lift logs

that can't be lifted, to hammer steel nails

so bent they crack when we hit them.

In the slave labor camps in Germany,

He believed life is hard, and we should

help each other. If you see someone

on a cross, his weight pulling him down

and breaking his muscles, you should try

to lift him, even if only for a minute,

even though you know lifting won't save him.

The poem is taken from his book about his dad and mom and their experiences in WWII, Echoes of Tattered Tongues

Posted by meetingbrook at 9:02 AM

exchange of what holiness once was

The story says angels, wise folks, and shepherds came and saw the child.

There’s a sparkle about arising faith alongside diminishing belief.

Bald mountain knows only itself.

Posted by meetingbrook at 12:29 AM

a feast of showing through — there’s nothing out there, not a thing in here

Jesus was born into this

On mountain because it’s there

This, and as this is, itself

To suffer this is

To allow what is to be

Rather, come to understand

The whole of this existence

Nothing other, no outside

The inner life is

All of life seen through and through

Through and with and in

Itself, beholding what is

Allowing itself to be

But “this” is unsayable.

But this —this resides well within itself.

When Gibran’s prophet-protagonist is asked to address the matter of talking, he responds:

You talk when you cease to be at peace with your thoughts;

And when you can no longer dwell in the solitude of your heart you live in your lips, and sound is a diversion and a pastime.

And in much of your talking, thinking is half murdered.

For thought is a bird of space, that in a cage of words may indeed unfold its wings but cannot fly.

This thought is morning light come up over night slumber.

(The silence of truth)

Posted by meetingbrook at 10:58 PM

In Rome, at this time

Knows he, too, soon enough,

Posted by meetingbrook at 4:25 AM

If you don’t make

Posted by meetingbrook at 9:52 PM

sounding what advances without an opposite

Posted by meetingbrook at 5:58 AM

it’s what our practice is

Posted by meetingbrook at 10:26 PM

or maybe it was meant for ensō dog

(Waka sounding the three of us)

Calls to me at barn door — Thanks

one is alone with another

Is who we are

(a waka, at first light, new year’s morning, tanka you)

Boats are on the hard

Look close — I Am — passing through 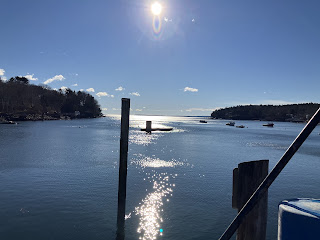 Rockport Harbor, new year’s morning
Posted by meetingbrook at 6:48 AM