The day went by yesterday without mention of Benedict of Nursia. Last week the man whose art gallery and marriage both closed told me that another Benedict, a monk in Virginia, was close to finish of his life. One Benedict inspired the monastic life, the other was ending his walk with it. The man on the motorbike said such was life and rolled away.

To visit a Benedictine monastery of almost any kind is to find oneself spending time among a group of people who, by their strivings to live and grow together, have become more and more themselves, as God intended them, instead of being crushed into false uniformity by some idealistic and authoritarian regime.
(--Universalis, from Friday 11 July 2008, on feast of Saint Benedict, Abbot)

The monk had been kind to me when I visited to make an extended retreat at his monastery.

There is no Dharma that can be explained, no Mind that can be spoken of: inherent reality-nature is empty. Going back to the fundamental basis, it is the Path. The real identity of the Path is empty and boundless, vast and pure. With its stillness and solitude, it obliterates the cosmos. It pervades ancient and modern, but its nature is pure. This is the pure buddha-land.
- Records of the Lanka 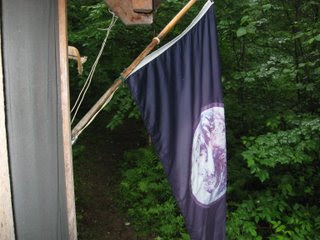 Every once and again things quiet. Mind resides nowhere.

I trust in the wisdom of the non-localized self.

No excluding. There's nothing wrong with any part of what we consider a cobbled self.

Nothing to cobble. Every bit of it is the whole of it.

There you are!
Posted by meetingbrook at 11:21 PM

In prison this morning two conversations about absurdity and betrayal.

Absurdity means 'out of tune.' We decide that absurdity posits a faith in an original harmony.

I burned incense, swept the earth, and waited
for a poem to come

Then I laughed and climbed the mountain
leaning on my staff.

How I'd love to master
the blue sky's art:

Tonight's conversation on John O'Donohue's Beauty -- the chapter on color. We are taken by his exposition. Everything has a vibration; a thing reflects what it rejects. A thing's color is 90% invisible; its color is a reflection of its rejection.

A way to discover intimacy with ourselves and all of life is to live with integrity, basing our lives on a vision of compassionate non-harming. When we dedicate ourselves to actions that do not hurt ourselves or others, our lives become all of a piece, a seamless garment with nothing separate or disconnected in the spiritual reality we discover.

In order to live with integrity, we must stop fragmenting and compartmentalizing our lives. Telling lies at work and then expecting great truths in meditation is nonsensical. Using our sexual energy in a way that harms ourselves or others, and then expecting to know transcendent love in another arena, is mindless. Every aspect of our lives is connected to every other aspect of our lives. This truth is the basis for an awakened life.

When we live with integrity, we further enhance intimacy with ourselves by being able to rejoice, taking active delight in our actions.
(-Sharon Salzberg, Lovingkindness)

When we retrieve original harmony, even the green plant reveals our inner awareness to us. Everything becomes clear as white light before refracting through the prism of one another.

We decided that betrayal is laying bare what is already there. We'd prefer it concealed. Our expectations create a hidden world. Betrayal upends expected hiddenness.

Everything is revealed at origin.

It's a home without fear of being found out.

Solitude is recognizing each moment as the only one.

Each person as the only one.

I never tire in my search for solitude;
I wander aimlessly along out-of-the-way trails,
Where I have never been before,
The more I change direction,
The wilder the road becomes.
- Chao Yi (1727-1814)

The only one is all there is.

Sit a bit, alone with this...realization.
Posted by meetingbrook at 10:59 PM

The two tires were expensive. Car is eight years old, and inspected. 2008 is half done.

I root for the solitaries.

Alone.
Posted by meetingbrook at 11:06 PM

Cool light breeze at water. A man holds a toddler in his arms at railing. Launch from yacht club passes in west channel. Summer in Camden.

There’s an old koan about a monk who went to his master and said, “I’m a very angry person, and I want you to help me.” The master said, “Show me your anger.” The monk said, “Well, right now I’m not angry. I can’t show it to you.” And the master said, “then obviously it’s not you, since sometimes it’s not even there.” Who we are has many faces, but these faces are not who we are.
-Charlotte Joko Beck, Everyday Zen

I'm glad to be working with crowbar and hammer, shovel and wheelbarrow. Vacation is for other people. Good for them.

I'd rather wonder how it is the House and Senate are allowing the Executive to engage in unlawful acts then pass retroactive permission and exoneration to all who've broken the law. As the line from a two bit gangster movie has it: Only chumps obey the law!

There used to be a law of God. Then God fell into disuse and abuse by purveyors of populist triumphalism and certitude. Their sincere belief that Jesus is the only truth worth their time is noteworthy and a little bit strange.

I'm reading an Irish novel about an alcoholic former Garda Síochána and the smart mouth adventures he has. The sardonic strange with Galway scenery. 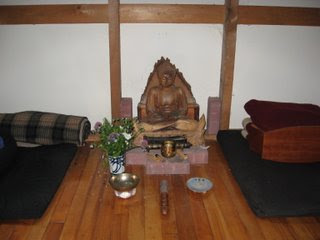 Today I despair justice. MacLeish’s J.B. came face to face with Sarah's tutorial that there is no justice, only love at end of play.

We're on our own.

Under you.
Posted by meetingbrook at 8:44 PM

Sun melts the early spring snow,
Willows and plum trees vie
For the freshest smell.
Every scene inspires innumerable poems,
But I seek the lines of just one man, off on his own.
- Daito (1282-1334)

Sweat makes everything damp. We are all off on our own.

Peace is a natural mind-state in every one of us. Peace has been there since the day we were born and it is going to be there till the day we die. It is our greatest gift; so why do we think we have no peace of mind? Experiencing peace is like looking at our hands. Usually, we see only the fingers – not the spaces in between. In a similar manner, when we look at the mind, we are aware of the active states, such as our running thoughts and the one-thousand-and-one feelings that are associated with them, but we tend to overlook the intervals of peace between them. If one were to be unhappy or sad every minute of the twenty-four-hour day, what would happen to us? I guess we would all be in the mad house!
(--Thynn Thynn, Living Meditation, Living Insight)

I've grown fond of the mad people I know. Madness seems as ordinary as chocolate crumb weight watcher's ice cream pop. When it's there you take it in.

“In making the word to become flesh the interpreter makes herself or himself into The word, takes the word as poem into her or his body, continues the creation process begun by the poet."
(--p. 52 in The Word’s Body: An Incarnational Aesthetic of Interpretation; by Alla Bozarth-Campbell, University of Alabama Press, 1979.)

Be aware of what you make your body.

The whole world depends on your awareness.

Whenever you do this -- embodying word -- remember the rest of us.
Posted by meetingbrook at 11:28 PM

We don't know what we are creating.

In conversation, something new is being created.

The Mind of Sages is subtle, hidden, beyond understanding and knowing. Great Enlightenment is dark and mysterious, wordless and speechless.
- Records of the Lanka 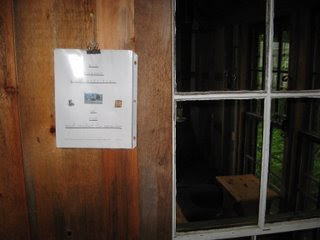 At practice table tonight someone spoke of "being in this body;" the importance of it.

I hear it in translation: "Being as this body."

We don't know what we are, creating.
Posted by meetingbrook at 8:49 PM