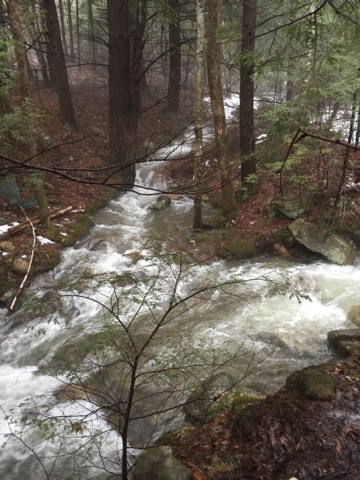 Posted by meetingbrook at 10:50 PM

It's a long story.
But it's a person's life.
Listen.
It is being told.

They are telling it.

Here
Posted by meetingbrook at 11:01 PM

Dasein, for Heidegger, means "Here I am!?"
Presencing presence.
Opening Being.
Lighting way.
Exclamation and question.
Posted by meetingbrook at 10:21 PM

full moon over ragged mtn through trees at 4:45am

Salt light under Thoreau woodpile words at 4:30 am. 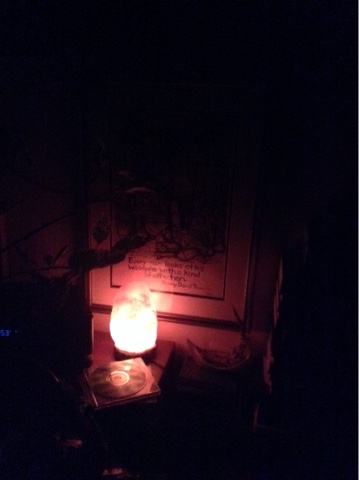 Soapstone holds candle in winter zendo at 4:50am, sitting mentioning names of remembered deceased.
Woodstove fire kindling cedar shingles at 5:05am.
Faint blue donation of nascent dawn under fading light of stars at 5:08am.
Kibbles for cats and biscuits for dog at 5:10am.
Gratefulness for frozen ground, silent mountain, warm covers, visiting words at 5:29am
Posted by meetingbrook at 5:29 AM

I receive this waking, this descending of stairs, this placing of three sticks of wood into stove, this bowing to white dog on angled couch, this escort of mottled cat brushing against ankles, this adjusting string of hanging thermometer on cold porch, this breath, this quiet -- I receive all this with gratitude, with mere joy on a Monday morning.
Posted by meetingbrook at 5:15 AM

and Bob's your uncle

I responded to a Valentine's card last week with a fractured ditty:

i love your words, and like the birds i break open seeds of this welcoming co-mono

It was the word "co-mono" sent to me that captures my attention. Co-mono, "alone-with" or together-alone, is a good neologism. It sounds a bit like 'common' and seems close to 'kimono.' [ORIGIN
mid 17th cent.: Japanese, from ki ‘wearing’ + mono ‘thing.’]

Reminds me of Robert Creeley poem:

It still makes sense
to know the song after all.

My wiseness I wear
in despair of something better.

I am all begger,
I am all ears.

Soon everything will be sold
and I can go back home

by myself again
and try to be a man.

This thing we "wear" -- whether belief in separateness or wiseness or a sense of inadequacy -- is a kimono we might choose to step out of from time to time.

This co-mono we are -- our common equality, the foundational awareness behind all appearance, the root silence out of which we emerge and into which we naturally return -- is a committed life (i.e. sent-together) journeying through all seeming separation toward actual indivisible unity.

We had breakfast hospitality on the porch this morning. Middle 60s inside, 40s outside, we in sunlit rocking chairs in mid-day passive solar. We talk. We sip coffee and tea. We ponder.

The creation of the manifold world from the unitary Soul↩

1. In the beginning this world was Soul (Ātman) alone in the form of a Person. Looking around, he saw nothing else than himself. He said first: ‘I am.’ Thence arose the name ‘I.’ Therefore even today, when one is addressed, he says first just ‘It is I’ and then speaks whatever name he has. Since before (pūrva) all this world he burned up (√uṣ) all evils, therefore he is a person (pur-uṣ-a). He who knows this, verily, burns up him who desires to be ahead of him.

2. He was afraid. Therefore one who is alone is afraid. This one then thought to himself: ‘Since there is nothing else than myself, of what am I afraid?’ Thereupon, verily, his fear departed, for of what should he have been afraid? Assuredly it is from a second that fear arises.
(--p.81, The Thirteen Principal Upanishads [1921] Translator: Robert Ernest Hume,)    http://oll.libertyfund.org/titles/2058
Haunting, the notion that "it is from a second that fear arises." Is there, then, no fear when we attend to/as 'first', or 'only' or 'alone'? First, that is, without a second. Not two. No broken fractured inventory ranked and sorted into upper and lower shelves, better and worse designation, richer or poorer disparity, important or unimportant sniffing.

With equality and awareness in all.

This -- with this I can align, I could pledge allegiance. [ORIGIN: late Middle English: from Anglo-Norman French, variant of Old French ligeance, from lige, liege (see liege), perhaps by association with Anglo-Latin alligantia ‘alliance.’]

Epilogue:
A haiku suggests itself:


Posted by meetingbrook at 2:23 PM