Being Catholic, for me, is trying to take the universal view. It is a Christian focus that looks wide and wants deep understanding and human generosity.

Abortion banning feels to me to be an excuse to pin all the failures to be authentically Christian/human on a philosophically ambiguous standpoint about when a 'person' begins and how to protect that person.

Those who choose to protect the unborn and punish the born, give tax shelter to the rich and contemn the needy to nightly shelters, are masking their failure to give equal regard to all our brothers and sisters.

They posture and pontificate in the name of some righteous religious reliquary of the sacred fecund womb to illustrate their pure and arrogant beliefs rather than seeing the whole picture that protects all life and works to sustain and improve a good and healthy life for all.

Posted by meetingbrook at 2:02 PM

a sort of thinking that suspects

Someone asked at Friday Evening Conversation, when we were talking about the many trillions of galaxies in the universe, and the interest renewed about the enormity, "Why do you want to know?"

It's a fair question.

I thought and suggested, "Because it's my body, extended and contracted."

And because, considering the thinking that our particular minds are perhaps only 5% of the 100% 0f mind/consciousness that is the integral net of all awareness. "Because it's my mind, particular and universal."

Some astrophysicists are thinking that we do not yet have a suitable mental construct of the universe and dimensionality, of time, space, visibility and invisibility, A sort of thinking that suspects, "When the mind is ready, the universe will reveal itself to it."

I have nowhere to go.

And, for the moment, I have time, whatever its duration.

Someone else mentioned mites. Another, tortillas. A third his childhood town in Vermont and the space exploration contributions it has made. Another person mentioned her uncle who was involved in designing and building a radio disc in California.

It's a pretty big place wherein we dwell!

When I die, I'll either know or not know more than I now know.

(What an interesting koan is on the cushion!)

Posted by meetingbrook at 10:50 AM

this also can be

In prison today, after meditation, after wondering about fear and coming face to face with a staring tiger, we read Charles Olson:

assume your nature as yourself

for the love of God

not even good enough

There is no intelligence

(and this is love)

This also can be

We spoke about the difference (where they live) between stares and stairs.

About tigers and the fears we carry.

About accepting, adjusting, and overcoming.

About extending one's self out and closer to One-Self.

About the commonality of community gathering together.
Posted by meetingbrook at 3:55 PM

I don’t know about you, but

I love this monastery

Posted by meetingbrook at 4:31 AM

he had nothing left to do

He got what was coming to him.

Louis Chauvel, aka Brother Antoine, was born in 1923 and has lived in the cave since 1966. The man had withdrawn from the world after being sent to military prison for a transcription error in his documents. “I had a twisted mind, and I was looking for a place that was as twisted as I was,” he explained.

The Cistercian spent his days praying, meditating and writing. The hermit was not averse to visitors, but as a sign clearly indicated: “Antoine’s cave is not a tourist curiosity, but a place of brotherly encounter”. He talked to walkers about philosophy and spirituality.

After a heavy fall in October 2017, he had no choice but to leave his cave. After first being accommodated in a retirement home, he has been welcomed in the municipality of Dieulefit in the Drôme since 2020. There he stayed with a traveling companion with whom he had gone to India 20 years ago. According to a friend, monk Antoine wanted to ‘die with the feeling that he had nothing left to do on earth’.

He was ‘an example of love, of simplicity, and of generosity’.

Perhaps, those lucky few who came to him, not put off by signs.

Posted by meetingbrook at 1:57 PM

Are you afraid to die? To be no more? To disappear without further appearance?

I'll tell you what I know.

Either way -- nothing is being revealed -- or there is nothing to reveal.

But if we talk about space:

The Universe is a vast place, filled with more galaxies than we’ve ever been able to count, even in just the portion we’ve been able to observe. Some 40 years ago, Carl Sagan taught the world that there were hundreds of billions of stars in the Milky Way alone, and perhaps as many as 100 billion galaxies within the observable Universe. Although he never said it in his famous television series, Cosmos, the phrase “billions and billions” has become synonymous with his name, and also with the number of stars we think of as being inherent to each galaxy, as well as the number of galaxies contained within the visible Universe.

But when it comes to the number of galaxies that are actually out there, we’ve learned a number of important facts that have led us to revise that number upwards, and not just by a little bit. Our most detailed observations of the distant Universe, from the Hubble eXtreme Deep Field, gave us an estimate of 170 billion galaxies. A theoretical calculation from a few years ago — the first to account for galaxies too small, faint, and distant to be seen — put the estimate far higher: at 2 trillion. But even that estimate is too low. There ought to be at least 6 trillion, and perhaps more like 20 trillion, galaxies, if we’re ever able to count them all. Here’s how we got there.

It’s true that there are hundreds of billions of stars within the Milky Way, which is just one galaxy among trillions — likely between 6 and 20 trillion — in this enormous, expanding Universe. But even though we’re seeing just the tip of the cosmic iceberg with even today’s greatest, most powerful observatories, we really are capturing most of the stellar activity that’s present throughout our cosmos. With the advent of the upcoming James Webb Space Telescope, we might finally get the observational confirmation of these faint, distant, early-type galaxies that we know must be out there. The Universe, no matter how we conceive or misconceive of it, cannot hide its truths when faced with superior data.  (--Ibid)

Still want to talk about death?

(Which two words remain, as good as any, a definition of what death is, what death means.)

Posted by meetingbrook at 1:13 PM

Will harm the former guy, blame

Hence, war, hot and bloody, will

Stretch over the coming years 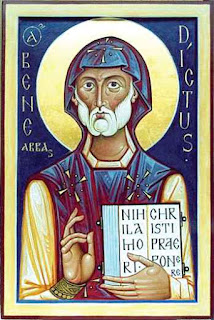 Posted by meetingbrook at 6:40 AM

hidden within the words, the way sounds through

"why have you forsaken me?"

Posted by meetingbrook at 4:13 PM

not at, but as

Are you seeking God?

is the direction you are

Posted by meetingbrook at 1:49 PM

It is such delight

One is enough, this

Gratitude for Being, Here

Posted by meetingbrook at 1:45 PM