If you are alone, that place

is a holy place

Posted by meetingbrook at 5:43 PM

Koan study: spontaneous response to what is arising. 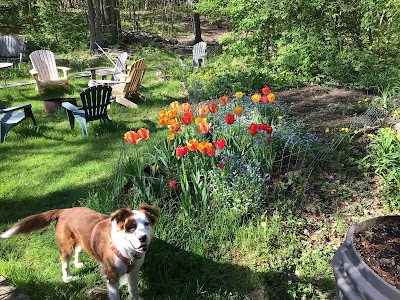 Flowers present the question.
Ensõ turns his back and asks for final bell to ring.
Posted by meetingbrook at 9:19 AM

Watching The Crown — the

have you tried this, they asked

Posted by meetingbrook at 7:47 AM

what was the sin, was the question

Falls from birdfeeder to grass,

Posted by meetingbrook at 7:38 AM

All day, rain showers and sunshine crisscross each other.

It feels like a long while ago I was on the mountain with Ensō this morning.

There is no silence like that of four o'clock in the nighttime of prayer.

You do not enter except without a story.

To enter there is to become unnameable.

Whoever is nowhere is nobody, and therefore cannot exist except as unborn:

No disguise will avail him anything

Such a one is neither lost nor found.

But he who has an address is lost.

(from poem, "The Fall," by Thomas Merton)

In 1633, at age eleven, Bankei Yotaku was banished from his family's home because of his consuming engagement with the Confucian texts that all schoolboys were required to copy and recite. Using a hut in the nearby hills, he wrote the word Shugyo-an, or "practice hermitage," on a plank of wood, propped it up beside the entrance, and settled down to devote himself to his own clarification of "bright virtue."

He finally turned to Zen and, after fourteen years of incredible hardship, achieved a decisive enlightenment, whereupon the Rinzai priest traveled unceasingly to the temples and monasteries of Japan, sharing what he'd learned.

"What I teach in these talks of mine is the Unborn Buddha-mind of illuminative wisdom, nothing else. Everyone is endowed with this Buddha-mind, only they don't know it." Casting aside the traditional aristocratic style of his contemporaries, he offered his teachings in the common language of the people. His style recalls the genius and simplicity of the great Chinese Zen masters of the T'ang dynasty.

To dwell in a practice hermitage is to listen to the mind listening to itself listening to nothing at all sounding in the surround.

This morning I thought of an old friend. We worked construction together many years ago. He practices mendicant-dwelling still as he wanders closer to ninety years of age.

I do not know where he lives.

Nor my other compatriot with whom I wrote articles for a journal and taught at conferences. He too pilgrimages like Ryōkan begging along roadway. He, as well, does kinhin towards ninety.

I don't know where he lives.

I suppose to be unborn suggests we do not have any address to move from or forward to.

(for a friend in prayer)

* from Hebrew, to hide

Posted by meetingbrook at 4:24 AM

One breath in one out

In silence allowing this

Posted by meetingbrook at 3:40 AM

It is that time again. Cruelty and animosity shun kindness and justice.

Alongside those now-familiar scenes, Jewish and Arab citizens have clashed in the worst violence in decades in Israeli cities — stoning cars, burning offices and places of worship, and forming mobs that have dragged people from their vehicles and beat them to within an inch of their lives.

“We need to solve our problems without causing a civil war that can be a danger to our existence, more than all the dangers we have from the outside,” Mr. Rivlin said. “The silent majority is not saying a thing, because it is utterly stunned.”

Palestinian leaders, however, said the talk of civil war was a distraction from what they see as the true cause of the unrest — police brutality against Palestinian protesters and provocative actions by right-wing Israeli settler groups.

Poem: five seven five seven seven, seven, (stop)
don't tell me your name
i'd rather not know nor care
you are enemy
living on this stolen land —
rather, here are our bombs,  hate
exploding to bits our hearts
(wfh/13may2021)
Posted by meetingbrook at 3:09 PM

There’s no telling where

Posted by meetingbrook at 5:22 AM

He rises to earth

then from earth, thus to ascend

God knows where. Look there

Where will he go, up

To what dimension, and where

Posted by meetingbrook at 10:51 PM

how do we fight lies

Much is being said about a cold civil war of ideological turmoil about the direction or destruction of democracy in the United States.

In that war there is a subtext of weapons chosen for the battlefield.

Lies are loaded and fired from sniper positions.

Truths are called up and assembled at front lines.

There are no non-combatants. Everyone is called up to engage the conflict.

Our children are hiding in shelter bunkers.

The question is asked: How do you fight lies?

Think again if you answered “With truth.”

The question has been long and seriously asked: What is truth?

And there’s been an equally long and serious silence in response.

We’ve been unfamiliar and little acquainted with truth.

Do we know how to answer?

Do we know how to fight?

Posted by meetingbrook at 4:52 PM

Some words say it well. These do:

What is Zen? It’s both something we are—our true nature expressing itself moment by moment—and something we do—a disciplined practice through which we can realize the joy of being. It is not a belief system to which one converts. There is no dogma or doctrine. Zen is the direct experience of what we might call ultimate reality, or the absolute, yet it is not separate from the ordinary, the relative. This direct experience is our birthright. The practice of zazen—meditation—is a way of realizing the non-dualistic, vibrant, subtle, and interconnected nature of all life.

(from, TheZen Studies Society, What Is Zen?)

We often confuse distinctiveness with opposition.

Difference does not mean contention.

The absolute in not at odds with the relative.

My being not you is not the trigger for evaluative hierarchy nor judgmental dismissiveness.

Variance of opinion and arguments of approach need not separate human from human inexorably.

Two things can be true at the same time. They can stand side by side. Sit at same table. Speak with one another.

This and that need not be this or that. And is not or. This resides in that and that resides in this. And yet, this is not that, nor is that this. This is this, that is that.

Zen is the direct experience of what we might call ultimate reality, or the absolute, yet it is not separate from the ordinary, the relative. This direct experience is our birthright. The practice of zazen—meditation—is a way of realizing the non-dualistic, vibrant, subtle, and interconnected nature of all life. (op-cit)

The word ‘see’ and the act of ‘seeing’ is non-separate inter-being inter-active dwelling.

And as for our temporary blindness?

Posted by meetingbrook at 7:54 AM 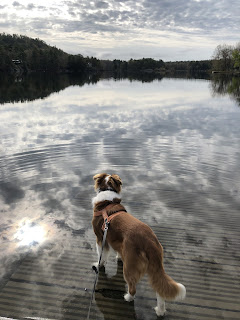 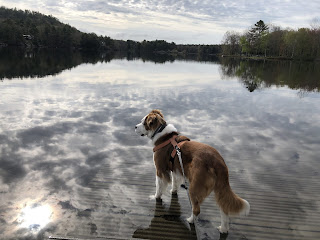 i haven’t a thought

What do you think’s next

Posted by meetingbrook at 5:54 PM

We want so much to

work for the people

It is hard to see

the way laws are debated

Posted by meetingbrook at 3:08 PM

better to be heard, not seen

No metaphor, no rote

Rain at 3 AM. Foot steps

Down hall, on porch roof

Posted by meetingbrook at 3:06 AM

suspect to both sides, prospect to each as they are

As a zen Buddhist

There is only one way

not one man’s death

At practice, the thought:

The cross is invitation

Posted by meetingbrook at 4:06 AM

what the cross invites non-dually

You too, (his ambiguous

mothering, dialogue, meditation, loss and death, (how) we go on

We're constantly birthing that which we give our attention to.

Posted by meetingbrook at 12:14 PM

she who places me here, a mother’s day haiku

She hears a petal murmur —

She found soil for us

Posted by meetingbrook at 8:32 AM

in Kabul blow up killing

many — (one breath, our breath)

I am in bed, three

Posted by meetingbrook at 3:09 AM