Reading Nisargadatta at morning practice in chapel/zendo.
Mostly I was thinking of (as Bob would fondly say) 'the drunks who aren't drinking right now' with whom I sat last night at the amateur performances at John Street back hall. The musical variety offerings were sweet. The very effort and support afforded each other by the group is sweeter still and softens the heart.

After practice, over tea and donuts, we spoke about conversations at the prison and the subtle politics that the men have to negotiate with each other. Pecking orders and judgmental lines being drawn are rife and have to be talked through. We love our Friday mornings there.

I love the bamboo tree:
It staves off heat and cold,
Cultivates unbending fidelity;
Empties its mind every day.
In the moonlight it plays with its shadow
And sends clean words before the wind.
When it wears snow on its head,
Grace fills the deep forest.
- Jinkag Haesim (1178-1234)

These days my thoughts turn to rowing.
There's a world in itself when in a small skiff looking at horizon, shore, and feathered sky.

Blue, blue the summit
Soars above fog and cloud
Steep and rough it stands
Against the sky
Everyone who looks up
Gazes in awe
It seems to go on forever
And each one sees the
Mountains of the earth
Holding it up.
- Muso Soseki (1275-1351)

Watching Emilio Estevez 2006 film "Bobby" about Bobby Kennedy, I remember how devastating the year 1968 was.

And when That is seen in its
Immanence and transcendence
Then the ties that have bound the
Heart are loosened, the doubts
Of the mind vanish, and the law
Of karma works no more.
- Mundaka Upanishad

It's strange to think that life went on. The war, the assassinations, the riots, the chaos.

Much died that year.

It's been a long wake.
Posted by meetingbrook at 11:49 PM

Walking to Rockport at dusk listening to Evelyn Underhill on Mysticism.
Even on back roads too many cars.

There's no need to drink anything else than water.
It's time to leave Afghanistan.
Posted by meetingbrook at 11:21 PM

John Fisher and Thomas More were executed rather than say publicly they did not hold what they did hold.

My father died because he was born with a heart and that heart stopped suddenly one day. He didn't die in a war, not a military war.


The fundamental teaching of Buddhism is nothing but the doctrine of One Mind. This Mind is originally perfect and vastly illuminating. It is clear and pure, containing nothing, not even a fine dust. There is neither delusion nor enlightenment, neither birth nor death, neither saints nor sinners. Sentient beings and Buddhas are of the same fundamental nature. There are no two natures to distinguish them. This is why Bodhidharma came from the west to teach the Ch'an method of "direct pointing" to the original true Mind.
- Han-Shan Te-Ch'ing (1586)

Check out the Bible:


That same night the angel of the Lord went out and struck down a hundred and eighty-five thousand men in the Assyrian camp. Sennacherib struck camp and left; he returned home and stayed in Nineveh. (2Kings19:36)

Damn! That's a lot of deaths.

There must be something I'm missing.
Posted by meetingbrook at 11:50 PM


Be consecrated to me, because I, the Lord, am holy, and I will set you apart from all these peoples so that you may be mine.
(--Leviticus 20:26)

What does it mean to be God's? We'd have to be able to navigate the holy.

Rowing for two hours to red bell buoy outside Rockport Harbor I listen to Evelyn Underhill's Mysticism being read via ipod. I leave a dime on the undulating buoy.

I apologize for ill I've caused.

I sorrow for the dead chipmunk left by barn door. No amount of philosophizing explains away end of life for any being.

Still, the day goes on. It's a new season.

Zazen then midday prayer in solitude.
Posted by meetingbrook at 10:11 PM

Jesus has a way about him.

Lose it. Forget it. Whatever you do for any one of these, you do for me. And then 'you' stop doing. What is done is done by the one doing it, not you.

At this point in the dialogue many are thinking about chopped liver. As in, 'What am I, ...."


Then to all he said, ‘If anyone wants to be a follower of mine, let him renounce himself and take up his cross every day and follow me. For anyone who wants to save his life will lose it; but anyone who loses his life for my sake, that man will save it.’
(--Luke 9:18-24)

Renounce, not announce. Announcing has become the dominant activity of our culture. 'I'm here, I'm important, I own this, I did this, Here is my autograph, More money for me, I'm indispensable, Listen to me!'

To renounce seems awkward. It means to formally declare one's abandonment of a claim, right, or possession. The dictionary goes on to add, to "renounce the world [is to] completely withdraw from society or material affairs in order to lead a life considered to be more spiritually fulfilling." (Apple Dict.)

The lines about renouncing and losing follow the Gospel dialogue:


One day when Jesus was praying alone in the presence of his disciples he put this question to them, ‘Who do the crowds say I am?’ And they answered, ‘John the Baptist; others Elijah; and others say one of the ancient prophets come back to life.’ ‘But you,’ he said ‘who do you say I am?’ It was Peter who spoke up. ‘The Christ of God’ he said. But he gave them strict orders not to tell anyone anything about this.
‘The Son of Man’ he said ‘is destined to suffer grievously, to be rejected by the elders and chief priests and scribes and to be put to death, and to be raised up on the third day.’
(-Ibid)

The Christ of God. That rang a bell. The next line is curious, about strict orders not to tell anyone about this. Don't ask, don't tell; only listen, only act.

These days I feel I am stepping sideways and taking half-steps back. I withdraw from a world that seems foreign and itself a mirage. Suddenly any foray into populated arena feels like a netherworld, a hidden underworld or ill-defined area. Everyone there is just fine -- regular, ordinarily cheerful, purposeful, and productive -- accomplishing the demands of everyday life with resolve and good will. My half-step back and away, at first disconcerting, finds a template within a context that temporarily holds it from falling into the common parlance of psychology and online social network breeziness.

The template used as pattern for processes of solitude, silence, renunciation, stillness, hiddenness, and prayerfulness -- a pattern once known as contemplative life or mystical life --
seeks a new name.

Mysticism, a forgotten and often suspect term, comes with two parts to its definition:


1. belief that union with or absorption into the Deity or the absolute, or the spiritual apprehension of knowledge inaccessible to the intellect, may be attained through contemplation and self-surrender.
2. belief characterized by self-delusion or dreamy confusion of thought, esp. when based on the assumption of occult qualities or mysterious agencies.

Peter said Jesus was the Christ of God. We associate that unexpected blurt with the shrunken belief that all it was about was being a human sacrifice for divine ends. Price paid, here's the receipt, announce your purchase, have a nice day! This Christ, for me these days, is less and less a being bowing on center stage; more a way of being that needs no telling.

I'm learning to look at things. At people. At words.
I'm learning to be here in a muted and not quite visible way. The half-step back feels right. The sideways stance that inches toward invisibility seems sufficient for now.

I ponder what "lose your life" means. There's no looking at God. It is, I suspect, the gaze of God flowing through each of us as we make way through the day. 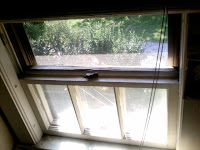 The cat or dog (or human being?) chasing tail is the exercise of frantic defragmentation. We try to reconstitute the broken-apart. Is the Christ of God recognizing with healing renunciation that the life we've thought was ours -- separate and fragmented, is not the truth, not the case, not the fact of things?

There's another way to see this.

Another way to realize "not to tell anyone anything about this."

For me, it is being stupid. For me it is to recognize my stupidity. (Latin stupidus, from stupere ‘be amazed or stunned.’)

To revere the way about Jesus.

To revere the way about the Christ of God.

To revere the way about each and every one of us.
Posted by meetingbrook at 8:52 AM