Have mercy Lord and hear my prayer

We cut broken tree by road.

Hear, O Israel! The Lord is our God, the Lord alone! Therefore, you shall love the Lord, your God, with all your heart, and with all your soul, and with all your strength. Take to heart these words which I enjoin on you today. Drill them into your children. Speak of them at home and abroad, whether you are busy or at rest.  (--from Compline, Saturday night)

We pray for what and who needs praying for.
Posted by meetingbrook at 11:58 PM


How lovely the idea of shared responsibility for the world.


If this sounds like a lot of emotional tumult, it is. When we engage in a creativity recovery, we enter into a withdrawal process from life as we know it. Withdrawal is another way of saying detachment or nonattachment, which is emblematic of consistent work with any meditation practice.

We ourselves are the substance we withdraw to, not from, as we pull our overextended and misplaced creative energy back into our own core.

(--Julia Cameron, in The Artist's Way)

How is it so few keep so many from it's realization?
Posted by meetingbrook at 11:05 PM

A woman we know writes from prison. She is not free today.

What we do is listen. To her. Our prayer.

Come and See, what I have done: I’ve given My only Son. He lived for you, and He died for you.Come and See.

Come and See, what I have done: I’ve given My only Son.He lived for you, and He died for you.Come and See.

Creator of Love, source of all life, have mercy on us, forgive us Lord.Come and See, what I have done: I’ve given My only Son.He lived for you, and He died for you.Come and See.

“Pieta” by Melinda Kirigin-Voss; The Pietà (pl. same; Italian for pity) is a subject in Christian art depicting the Virgin Mary cradling the dead body of Jesus, most often found in sculpture.

Posted by meetingbrook at 4:50 PM


Let’s say we were going to contemplate listening.

No, no, there is no going back.

Less and less you are

that possibility you were.

More and more you have become

those lives and deaths

that have belonged to you.

You have become a sort of grave

containing much that was

and is no more in time, beloved

then, now, and always.

And so you have become a sort of tree

standing over a grave.

Now more than ever you can be

generous toward each day

that comes, young, to disappear

forever, and yet remain

unaging in the mind.

Every day you have less reason

not to give yourself away.

it’s what you are listening

Posted by meetingbrook at 12:48 PM

This is the summer of our dissing Cheney.
Posted by meetingbrook at 6:12 AM

Yes, and it probably always will be so; for now

Let's not call it hiding. Let's say it is climbing ladder in chapel zendo to loft, opening glass window to screen, and sitting in white cushioned metal chair looking out to trees shading hermitage path. 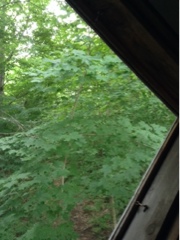 In prison this morning we spoke of Westman's Structure of Biblical Myths, and Hazony's The Philosophy of Hebrew Scripture. Two wonderfully skeptical and agnostic men in prison continually surprise themselves with their observations and insights about the things they read and the discussions we have. Saskia brings vital participation.

Prison is prison. We do our best to listen through it. 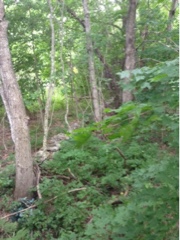 Mosquito bobs against screen looking for flaw to penetrate.

Lori and Mark spend three nights. They are sweet kids (if at their third and fourth decades they can be called kids!) They visit their aging uncle and are good sports in the presence of idiosyncratic spirituality and dozing crankiness. They eat lobster. I go to bed. 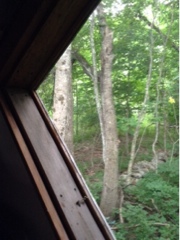 Saskia says that one of the women in our yurt colloquium mentioned how grateful she was (as an atheist) that meetingbrook has never once attempted to convert her all the years she's known us. I wonder what we'd try to convert anyone to. We are a certain distance away from any particular belief, a nodding acquaintance with every sincere attempt or abject indifference to find meaning in systems that need rubbing oil and dust cloth to have them appear out of the obscurity they've become. 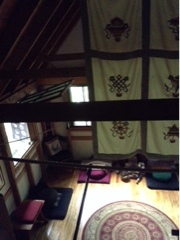 Charlie nailed it with what will become a new blessing in prison this morning. He says, "Fuck it; It is what it is!" I suspect, yes, and it probably always will be so; for now.
I imagine this phrasing will take its place next to the “God bless you's" favored by the believing folks there. It has all the characteristics of detachment, acceptance, and clear sight so important to a meeting of the esoteric and exoteric traditions.

No matter what part is wrong, it's all right!

Posted by meetingbrook at 8:01 PM

The snow bowl closes barn door now that horses are gone. Silt in brook. Silt in pond. Silt like lava flow down our path.

Shame that it all went downhill.

This is a badly mixed metaphor.
Posted by meetingbrook at 10:13 PM