Posted by meetingbrook at 11:19 PM

Neutrinos passing through head to toe.

What has a middle but no sides

Justice is a fragile compromise. It does not mean awakening. Justice means that some law -- whether a statute law, or street law -- has been executed, and some renewed balance effected.


Only one who bursts with enthusiasm do I instruct;
Only one who bubbles with excitement do I enlighten.
If I hold up one corner and you do not come back to me
With the other three,
I do not continue the lesson.
--Confucius

The lesson of awakening is that justice is partisan control, only half the narrative exacting satisfaction; while true awakening is the whole story with compassion effecting balance without sides.

Posted by meetingbrook at 10:43 PM

The men who were wrong are still wrong


After watching documentary "The Man Nobody Knew: In Search of My Father, CIA Spymaster William Colby" (2011) about former covert operator and CIA chief William Colby by his son Carl Colby, I think about the sorrow of it all.

Maybe the generals, spy agency, law officers, ubiquitous political names and faces hawking war and hellish advice, and a series of executive office presidents equally fogged with awkward motivation, were all wrong. Vietnam was so wrong. The same names and faces continued into Iraq and into our homes and domestic surveillance. Two wrongs make a horribly painful time for everyone involved.

The trail enters
Pines, the sound of pines;
The farther one goes,
The rarer the sound.
Mountains' light
Colors the river water.
Among peaks,
A monk sits Zen,
Facing an old branch
Of a cassia tree,
Once a seedling in the Liang.
- Chiao-jan (730-799)

It is not enough to remember. There must also be great sorrow for a people, for betrayal, and for current karmic reverberation.

Going to sit in meditation cabin, light candle, light incense, alighting on cushion, I sit in the sound of rain on roof, falling to earth, the sound of awareness inviting a new sustenance of forgiveness.

I must go; change longs for me.

Itadakimasu: Thank you Nature for this nourishment and nurturance.
Posted by meetingbrook at 10:56 PM


I don't know which tries to be more insulting: celebrity news or religious/political/economic views. Bare bums or false behinds! Put differently, rear dead-ends and misinformation seem to distract the small amounts of attention allotted to each scanning-bot these days.


The World is Too Much With Us

The world is too much with us; late and soon,
Getting and spending, we lay waste our powers;
Little we see in Nature that is ours;
We have given our hearts away, a sordid boon!
This Sea that bares her bosom to the moon;
The winds that will be howling at all hours,
And are up-gathered now like sleeping flowers,
For this, for everything, we are out of tune;
It moves us not.--Great God! I'd rather be
A pagan suckled in a creed outworn;
So might I, standing on this pleasant lea,
Have glimpses that would make me less forlorn;
Have sight of Proteus rising from the sea;
Or hear old Triton blow his wreathèd horn.

Maybe that's what happens in a time-without-integrity. We turn to sports, celebrity, and numbing drugs. If the world is illusion, some think, then I'll get mine, thank you, the way I want it.


Don't be concerned with
who is wise and who is stupid.
Do not discriminate the
sharp from the dull.
To practice whole-heartedly
is the true endeavor of the way.
Practice-realization is not
defiled with specialness;
it is a matter for every day.
- Dogen 1227

I have no plan, antidote, desire for any kind of revival tent, nor a sense that anything has changed much in the last five thousand years.

All I have is a coffee maker, a zafu/zabuton, a pair of sneakers, some words to listen to and think about, things to tidy up, and this present moment to realize. And that's good enough for now.

Maybe you are the world.

Maybe if I meet you with respect and reverence we will converse the world.

Yeah -- it has never been a matter of converting or conversion, rather our job is to converse the world with an integration of conversation.

Whatever you say, I hear it, and we become the body of word in co-response and co-mu-union.

Try that on for sigh/eyes! 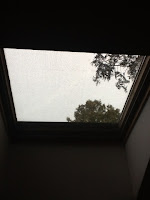 I like the distinction between being religious and having beliefs.

The yearning itself for what is connecting/felt.

Posted by meetingbrook at 11:14 PM

Silence knows no other way


Tell me in silence.

No answers can be found, and no amount of questioning will bring out those answers. We may continue to ask, but as Brown notes, one thing Wiesel's writing suggests is ``that arguments justifying God in the face of evil are not only inadequate, they are diabolical.'' ([Brown], 154) Any answer cannot come from man, but from God himself. This is what Moshe the Beadle had tried to tell Wiesel when he was a young boy in Sighet, before the terrors of the Holocaust destroyed his life. Moshe said, ``Man raises himself toward God by the questions he asks Him...That is the true dialogue. Man questions God and God answers. But we don't understand His answers. We can't understand them. Because they come from the depths of the soul, and they stay there until death. You will find the true answers, Eliezer, only within yourself!'' ([Night], 2-3) There can be no end to the questioning, even if there are no answers. To expect answers is a mistake, as Wiesel learned from the Wandering Jew, who told him, ``When will you understand that you are living and searching in error, because God means movement and not explanation.'' ([Legends], 93) That is his final discovery. His relationship with God does not depend on answers. We pray to Him. He handles those prayers in His own way. We can agree or disagree with that way. It's all very simple. In one of his prayers in The Six Days of Destruction, Wiesel writes, ``We do not demand answers, God. But if this is the last page of the human chronicles, assure us that we had the right to ask.'' ([Six Days], 55) If we ask and accept God's answer, even if He answers in silence, then we will have reached the level of Elie Wiesel's relationship to God.
http://www.stsci.edu/~rdouglas/publications/suff/suff.html
("Elie Wiesel's Relationship with God" By Robert E. Douglas, Jr., Submitted in Partial Fulfillment of the Requirements of the Humanities Sufficiency Program, Worcester Polytechnic Institute, Worcester, Massachusetts)

I need not know any other way.
Posted by meetingbrook at 11:08 PM