Wood fire went out by time I come down at 4:50AM 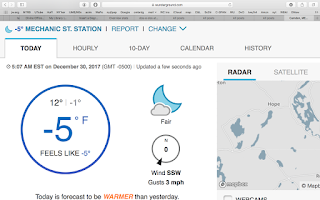 Citta steals a sit on lap. 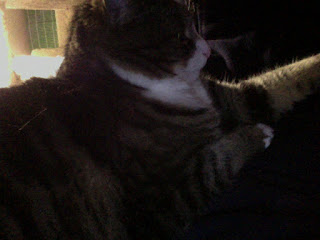 Posted by meetingbrook at 5:27 AM

without ideals or violence

AAA arrives. He says I’ll be needing a new battery, rather than his returning daily this cold snap.  (He didn’t say that last thing, I did.)

You wonder how the trees stand it.

All the complicated details
of the attiring and
the disattiring are completed!
A liquid moon
moves gently among
the long branches.
Thus having prepared their buds
against a sure winter
the wise trees
stand sleeping in the cold. 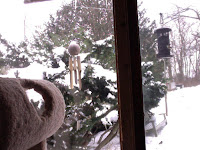 Couldn’t go into prison today, nor did I plan to, but couldn’t if I wanted to. A vacation day. Submitted three change-of-grades for last spring’s students yesterday. Felt like I did something. Read a bunch of papers that reminded me how students make the best of questionable teaching.

The slim cat is bored. She jumps on my stretched legs. Her throwing up exercise is over. The dog won’t play with her. The cellar door is closed.  The porch is now at 6° and is off limits except for the tree with white lights standing stiffly.

I’ve been up since before dawn. I learn the drug war is endlessly promulgating itself, the political do-si-do spins tirelessly across landscape, and song birds seem grateful for sunflower seeds on bitter days at foot of mountain.


A special transmission outside the scriptures
No dependence upon words and letters;
Direct pointing at the soul of man;
Seeing into one’s own nature and the attainment of Buddha-hood.


A disciple once asked a Zen master: “I wish to read the sutras, and what would you advise me to do about it?” The master replied: “Do you think a merchant who deals in millions would bother about making a few pennies?” (p.220)

When I think of current tax legislation and the millionaires authoring it, there’s not much confidence they care about the nickel and dime constituents to whom they pander, but rather, seek their own gold-bar relief and that of their patrons dealing from the top of the deck with Kings, Queens, Jacks, and Aces.

That’s closer to it.

Maybe Satchmo Armstrong playing blues. He’s got a right to sing the blues. Like the men and women selling and shooting heroin in Baltimore and Oakland, the ones preying and praying on each other. The off-rhythm of our lives.

What do you think we’d see once direct pointing at the soul realized its aim?

Political, the word, is rooted in Greek polis: a Greek city-state;  broadly  : a state or society especially when characterized by a sense of community. (Dictionary)

And who speaks for the community as a whole?

We are not attentive to the whole.

Fragments are easier to attend to. It is easier to fragment than it is to whole.

The first line in John Fowle’s novel, Daniel Martin, is WHOLE SIGHT; OR ALL THE REST IS DESOLATION. It has been a koan for me.

Elsewhere,
In Daniel Martin Fowles explores the concept of “whole sight” in a variety of ways. Sometimes he uses direct discourse. At one point the character Anthony tells Daniel,

"I'm still defeated by the conundrum of God. But I have the Devil clear."
"And what's he?"
"Not seeing whole."

From this we might infer that “seeing whole” can be linked to God, godliness, or the divine
(cf http://www.fowlesbooks.com/forum/viewtopic.php?f=5&t=49)

Mono, in Greek, means one. (From Greek, monos, alone).

It is a choice, some say, to be alone. Alone by oneself, alone with others, alone with the Alone.

At meetingbrook the descriptive we use is “monastics of no other.”

Perhaps we should add: alone with all the fragmented.
Posted by meetingbrook at 7:08 AM

Trump: Makes America Grate Again
Posted by meetingbrook at 10:33 AM

if you must weep

Then there are the days the bear eats you.

Not often, but sometimes, it feels like something large and unstoppable fills the trail ahead.

The blustering and mendacious president and his obsequious opportunistic Republican Congress feel like looming bear who’s caught scent of traveler in middle of forest as last daylight looks to crawl behind darkening trees.

He is, it appears, a rapacious devouring golemesque anomaly. His devotees fill the public square with smug menace. Names like Hannity, Limbaugh, Beck, Hatch, Pence, Nunes, McConnell, Bannon, and other voices make you want to follow Lao Tzu out gate of despondency into obscurity.

God banish from your house
The fly, the roach, the mouse

That riots in the walls
Until the plaster falls;

Admonish from your door
The hypocrite and liar;

No shy, soft, tigrish fear
Permit upon your stair,

Nor agents of your doubt.
God drive them whistling out.

Against the drip of night
God keep all windows tight,

Protect your mirrors from
Surprise, delirium,

Admit no trailing wind
Into your shuttered mind

To plume the lake of sleep
With dreams. If you must weep

God give you tears, but leave
You secrecy to grieve,

And islands for your pride,
And love to nest in your side.

The gritty Boston AA descriptive, prose raw and melodic, a hand on slumping shoulder, balm to terrible time.
Posted by meetingbrook at 6:59 AM

It is the inner, contained, space for which we have no name.


Eventually I came to understand that the Runa do not have vocabulary for the edges that we perceive separating one element from another. This reflects their social structure and their perceptions of the physical world and even their political status. (from novel, The Sparrow, by Mary Doria Russell page 233)

We know edges, and we traverse edges. Walls, ceilings, floors -- these we name and dwell between. Gates, borders, property boundaries -- these we guard and protect with fierce determination.

It seems to be how we are. It seems our vocabulary shapes our mental and physical space.

Now that there is nothing left to say, perhaps everything will disappear.

Where did I leave my mind?
Posted by meetingbrook at 7:50 PM

what is between silence and poetry

When words become real they are known as acts.

Ultimately for a word to become a body it must be what it attracts.

When it is time to create and realize what it means to be human, God, with silence and poetry, interacts.
Posted by meetingbrook at 11:25 PM

one body at a time through now into here.

The one who is to come is the one that is here. Source moving forward and beyond what we can think.


Let me seek, then, the gift of silence, and poverty, and solitude, where everything I touch is turned into a prayer: where the sky is my prayer, the birds are my prayer, the wind in the trees is my prayer, for God is all in all.   ~ from THOUGHTS IN SOLITUDE  by Thomas Merton" 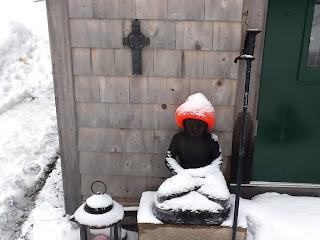 At Sunday Evening Practice last night, after video excerpt from Ilia Delio, Catholicity, Cosmology and Consciousness: Why Wholeness Matters, followed by fish and linguini, and chocolate lovers torte, someone caught the thread of conversation with the observation — “We are source looking back at itself.” 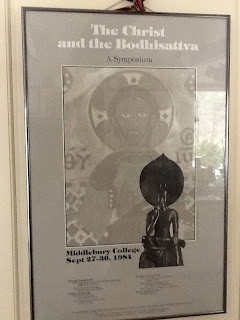 We wonder about this incarnation.

And from the future God draws us forward one body at a time through now into here.
Posted by meetingbrook at 8:35 AM


14] For while all things were in quiet silence, and the night was in the midst of her course, [15] Thy almighty word leapt down from heaven from thy royal throne, as a fierce conqueror into the midst of the land of destruction.

well-trodden paths from house to house

We are a Laura of Hermits.

Each wanders in, idiorhythmically, from houses and apartments scattered about midcoast and environs. No one, particularly, avows any kind of allegiance or stability to anything meetingbrook, except they wander in or follow trail to door, stop in, and pass through.

We are mendicant ephemerals practicing impermanence with each passing face in each fleeting moment in each imagined existence we call ourselves.

Krista Tibbett and Brother David Steindl-Rast converse on the radio:


Br. Steindl-Rast: At the very core, because the core of every religion is the religion of the heart, and that is the monastic life. Of course, as an institution, and monasteries are also institutions, it also, again and again, hardens and becomes decadent, has to be renewed. But as an idea, the monastic life — all the different monasteries are a network of networks. Every monastery is a little network of monks and all the ones that belong to it.
It’s interesting, for instance, that today, when the number of monks in most monasteries — not everywhere. In other parts of the world, like in Africa and in Southeast Asia, Benedictine monasticism…

Ms. Tippett: Right, right. And they have many young people entering.

Br. Steindl-Rast: Yeah, they are growing. But in the West, it’s getting smaller and smaller as far as monks are concerned, but so many more lay people as oblates, as we call them, as extended family members, that the monasteries, if you count the oblates, are bigger now than they were before. And for these lay people who live their own lives every day, but in the spirit, somehow, of monastic life, because there’s a monk in each of us — for them, this is really a great help in their lives, and a help, also, to live gratefully. So, yes, I think monasteries have a real special vocation in our time to work as a model.
Ms. Tippett: They have a new vocation, a renewed vocation. It’s a vocation that has evolved.

Br. Steindl-Rast: Yes, it has evolved, because this power pyramid that has characterized our society, our whole civilization from the very beginning, for 5,000 years now — this pyramid of power, where even all our admirable culture and music and inventions and science, is all bought at the price of oppression and exploitation. It’s very sad, but this power pyramid is in process of collapsing.

That’s what’s happening in our times. And if you speak to people who are close to the top, and I have been privileged to speak to people pretty high up in politics, in economy, in science, in all the different fields, medicine and so forth, and everybody says we have come to the end of the rope, things are breaking down — people who really have an insight — because this pyramid has no future.

Ms. Tippett: Right, the whole — the form and the structure of how we did power and created …

Br. Steindl-Rast: It has to be replaced by network. And everybody knows that. And every group — monks are by no means the only ones. There are many, many communes and other groups out there that live network: a network of friends; a network of women who serve. These networks, they are the future.
Raimundo Panikkar — you probably came across him, one of the great minds of the 20th century — said the future will not be a new, big tower of power. Our hope in the future is the hope into well-trodden paths from house to house, these well-trodden paths from house to house. That is the image that holds a lot of promise for our future.

The future is of God.

It is time to embody what we see.

Posted by meetingbrook at 3:00 PM