not all are so fortunate

The secrets and spies of countries, their idiot compacts with weapons and torture.

It's a sick and cynical world of depraved wealth and noxious patriotism.

Yeah? Except when it is. So seldom does anyone learn of it.

Around the world. The cruelty. The monetizing of human worth for someone's passing pleasure or national payday.
Posted by meetingbrook at 11:57 PM

where our spirit’s walk


Lockdown today in prison. So we go to Moody’s Diner. And we’d been on-time/early first time in long time. Timely doesn’t always pay.


Our original Buddha-Nature is, in highest truth, devoid of any atom of objectivity. It is void, omnipresent, silent, pure; it is glorious and mysterious peaceful joy — and that is all. Enter deeply into it by awakening to it yourself. That which is before you is it, in all its fullness, utterly complete. There is naught beside.

Even if you go through all the stages of a Bodhisattva's progress toward Buddhahood, one by one; when at last, in a single flash, you attain to full realization, you will only be realizing the Buddha-Nature which has been with you all the time; and by all the foregoing stages you will have added to it nothing at all.

You will come to look upon all those eons of work and achievement as no better than unreal actions performed in a dream. That is why the Tathagata said, "I truly attained nothing from complete, unexcelled Enlightenment. Had there been anything attained, Dipamkara Buddha would not have made the prophecy concerning me." He also said, "This Dharma is absolutely without distinctions, neither high nor low, and its name is Bodhi."

It is pure Mind, which is the source of everything and which, whether appearing as sentient beings or as Buddhas, as the rivers and mountains of the world which has form, as that which is formless, or as penetrating the whole universe absolutely without distinctions, there being no such entities as selfness and otherness.

At poetry today in Quarry Hill there were many A.S. Milne poems by Tina, Lydia, and Sheilah. They were cheerful. Walt read from his wife’s mother’s booklet of poems. And I read Jane Hirshfield.


"When I'm alone"—the words tripped off his tongue
As though to be alone were nothing strange.
“When I was young," he said; "when I was young..."

I thought of age, and loneliness, and change.
I thought how strange we grow when we're alone,
And how unlike the selves that meet and talk,
And blow the candles out, and say good night.

Alone... The word is life endured and known.
It is the stillness where our spirits walk
And all but inmost faith is overthrown.

The question remains as institutions, lineages, denominations, and nations all fall apart or fail -- how will we move on into new expressions of beloved forms and familiar expressions?

Begin in your own way, I say.

Tat tvam asi -- you are that

There's nothing you can do. 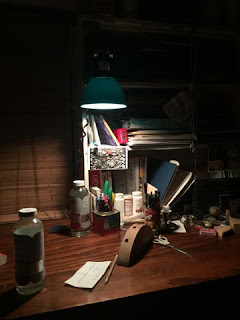 Posted by meetingbrook at 9:29 PM

Is that so; it is

In the film, well seasoned monk carries statue of Avalokiteśvara to top of mountain far above floating monastery.
Where she belongs.
Beyond.
Overlooking.
Posted by meetingbrook at 11:47 PM

here we are, again: half and half and

Four lines by Paul Simon written for Leonard Bernstein’s Mass, which inaugurated the Kennedy Center for the Performing Arts in Washington DC on Sept. 8, 1971:


HALF OF THE PEOPLE ARE STONED

AND THE OTHER HALF ARE WAITING FOR THE NEXT ELECTION

HALF THE PEOPLE ARE DROWNED

AND THE OTHER HALF ARE SWIMMING IN THE WRONG DIRECTION

That’s the thing about poetry and art.


Posted by meetingbrook at 6:31 PM

Posted by meetingbrook at 10:42 PM

one asks -- when have we three never met?

Posted by meetingbrook at 11:21 AM


It's the rare person who's never thought about it.

Suicide, as an idea, is common. As an actual attempt, not near the thought.

The thoughts promulgated by an intensely competitive and unfeeling way of life in contemporary times -- thoughts that suggest reality show stars, political cruelty, athletic celebrity, and Wall Street's excessive looting are the only ideals worth accomplishing -- cannot sustain a vital interest in the simple ordinary acts of attention to one another and humane kindness to all.

Perhaps a shift toward an attractive way of life, philosophy as a way of life -- thoughtful, playful, creative and contemplative  -- with shared interests in becoming liberated from deluded ambitions, freeing oneself and whole communities toward a capable joy.

Enough already with failure-future thinking; we must find joyful-present feeling worth living and sharing.