Even the Buddha himself, with his great store of accumulated virtue, could not avoid death. When he reached old age, he relinquished his body and let go of its heavy burden. Now you too must learn to be satisfied with the many years you have already depended on your body. You should feel that it's enough.

You can compare it to household utensils that you've had for a long time—your cups, saucers, plates, and so on. When you first

had them they were clean and shining, but now after using them for so long, they're starting to wear out. Some are already broken, some have disappeared, and those left are deteriorating: they have no stable form, and it's their nature to be like that. Your body is the same way. It has been continually changing right from the day you were born, through childhood and youth, until now it has reached old age. You must accept that. The Buddha said that all conditions (sankharas), whether they are internal conditions, bodily conditions, or external conditions, are not-self—their nature is to change. Contemplate this truth until you see it clearly.

practice
Posted by meetingbrook at 5:41 AM

I didn't know her poetry. In prison we read one that Doris sent. We spent a long time on it.

This is not that one.

This is this one.

CHEMO SIDE EFFECTS: MEMORY
(By Elise Partridge)
Where is the word I want?
Groping
in the thicket,
about to pinch the
dangling
berry, my fingerpads
close on
air.
I can hear it
scrabbling like a squirrel
on the oak’s far side.
Word, please send over this black stretch of ocean
your singular flare,
blaze
your topaz in the mind’s blank.
I could always pull the gift
from the lucky-dip barrel,
scoop the right jewel
from my dragon’s trove….
Now I flail,
the wrong item creaks up
on the mental dumbwaiter.
No use—
it’s turning
out of sight,
a bicycle down a
Venetian alley—
I clatter after, only to find
gondolas bobbing in sunny silence,
a pigeon mumbling something
I just can’t catch.
She died the end of January. Cancer. Age 56.
A poet's death is noteworthy. Perhaps because wording seeing is seldom given as much clarity as when a poet says what she sees.
As we clatter after.
Posted by meetingbrook at 4:18 PM

Democracy was a good idea. Abject terror and militarized terror protection/response seems to be the more pragmatic choice of most everyone today. Kill first, kill second, then kill again. Some, then, have an election the prelude of which is years of teasing populace into believing their cardboard choice matters.


Meanwhile the world goes on.

Meanwhile the sun and the clear pebbles of the rain

are moving across the landscapes,

over the prairies and the deep trees,

the mountains and the rivers.

Meanwhile the wild geese, high in the clean blue air,

Detention and assassination, torture and beheading, drones and predatory surveillance have replaced voting booth and town meeting, prayer in mosque, synagogue, or church. We have devolved into a video game template of contemporary culture where anyone disagreeing is mowed down or black-hooded away, whether on American streets or Afghanistan, Iraq, Syrian roads. Police become infantry, infantry become sniper assassins, sniper assassins become private contractors, private contractors become owners of politicians, politicians become marionettes in barker sideshows Punch and Judying each other in bad parodies pretending to conduct the people's business. And the people? The people are too cynical, too frightened or too uninformed to recognize the strings, the rifle sights, or the tampered voting machines walling them in.

This is not your pious lenten meditation.

It occurs to me that faith in civil governance, like faith in anything resembling hiermos gamos (a Jungian alchemical union of opposites) has wilted like unwatered house plants.

When people no longer see something life-giving, they join the impulse to kill quickly that which is dying a painful death. ISIL wishes to hurry their version of apocalypse. Fundamentalist Christians join their Islamic and Jewish cousins in attempting to rebuild temple or hurry Jesus' return. Right wing legislators work to prove incompetence of government by stripping it of useful benefit and handing power over to private practitioners of corrupt capitalism.

Both fanatic and mystic cry for divinity to appear. God, Allah, Jehovah, Father, Mother, Brahman, Christ, Krishna, Tao, Buddha, Anyone -- the cri du coeur rises from despair -- for help, for sanity, for an end to the absurd ignorance cloaking human decency across the planet.

It is lent. Nothing we know makes sense. What to do?

What form of emptiness, what kind of prayer, what act of sane retrieval is there that will eliminate insane murder and derision? What will replace our fatal antagonistic mortality of division with a new mind of careful attention to supporting one another through the difficult task of becoming human and moving through the fears and terrors of our current evolutionary stumble-steps? Will the latent chrysalis of hidden transformation be allowed to find its way through to emergent new phylum of being-in-the-world?

The written material in back of church in Fort Kent yesterday urged prayer, fasting, and alms giving.

Is there something I'm missing?

Have I never gotten what real spiritual life is? 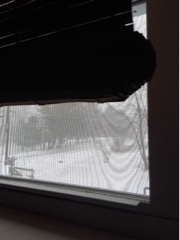 You are cause, condition, parent and offspring of this inchoate and nascent creation -- yourself. This is no solipsistic ego-fashion walking a new-season runway. This creation is now-beyond-itself. Particular, specific, personal, and informed. A concretion, a growing together, of the spiritual.

Impregnate and be impregnated with this understanding -- what we envision, what we see, is what we become -- proleptic and parthenogenic.

The obsession of our contemporary culture with sex trafficking, abuse and molestation, prostitution and slavery kidnapping, numbing of real feeling for contrived power satisfaction, objectifying women and children with acts of venal self-serving poison -- these behaviors are signs of terror capitalism haunting our soul.

Whoever you are, no matter how lonely,

the world offers itself to your imagination,

calls to you like the wild geese, harsh and exciting --

over and over announcing your place

in the family of things.

Don't think you are an orphan. You are not abandoned. See, these words find you!

We are that place for ourselves, that family for one-another. A new biological/ecological/noosphere, as you are, transforming itself into One-Another-Itself.

Over and over, it is our place to imagine, create, inhabit, and inspire with loving dignity.

Out of, and with, ashes. 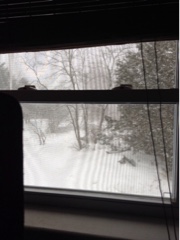 Because I do not hope to know again
The infirm glory of the positive hour
Because I do not think
Because I know I shall not know
The one veritable transitory power
Because I cannot drink
There, where trees flower, and springs flow, for there is nothing again

Because I know that time is always time
And place is always and only place
And what is actual is actual only for one time
And only for one place
I rejoice that things are as they are and
I renounce the blessed face
And renounce the voice
Because I cannot hope to turn again
Consequently I rejoice, having to construct something
Upon which to rejoice

And pray to God to have mercy upon us
And pray that I may forget
These matters that with myself I too much discuss
Too much explain
Because I do not hope to turn again
Let these words answer
For what is done, not to be done again
May the judgement not be too heavy upon us

Because these wings are no longer wings to fly
But merely vans to beat the air
The air which is now thoroughly small and dry
Smaller and dryer than the will
Teach us to care and not to care
Teach us to sit still.

Man is a mental being whose mentality works here involved, obscure and degraded in a physical brain. Even in the highest of his kind it is baulked of its luminous possibilities of supreme force and freedom by this dependence, shut off even from its own divine powers, impotent to change our life beyond certain narrow and precarious limits; it is an imprisoned and checked force, most often nothing but a servitor or caterer of interests or a purveyor of amusement to the life and the body. But divine superman will be a gnostic spirit. Supermind in him will lay hands on the mental and physical instruments and, standing above and yet penetrating our lower already manifested parts, it will transform mind, life and body.

An immortal soul is somewhere within him and gives out some sparks of its presence; above an eternal spirit overshadows him and upholds the soul-continuity of his nature. But this greater spirit is obstructed from descent by the hard lid of his constructed personality; and that inner luminous soul is wrapped, stifled, oppressed in dense outer coatings. In all but a few the soul is seldom active, in most hardly perceptible.

Man's greatness is not in what he is, but in what he makes possible. His glory is that he is the closed place and secret workshop of a living labour in which supermanhood is being made ready by a divine Craftsman. But he is admitted too to a yet greater greatness and it is this that, allowed to be unlike the lower creation, he is partly an artisan of this divine change; his conscious assent, his consecrated will and participation are needed that into his body may descend the glory that will replace him. His aspiration is earth's call to the supramental creator.

If earth calls and the Supreme answers, the hour can be even now for that immense and glorious transformation.

(--from: The Hour of God, Sri Aurobindo,)    http://www.cosmicharmony.com/Sp/Aurobndo/Aurobndo.htm#Future


With crazy speed, dizzyingly acceleration, we circle around our dissonance, our unfathomable rush, a self-collider seeking to explode into our opposite direction to see what goes missing in the after-detonation. That missing substrate entity we will curiously call God-gone.

As if discovering what is not there would console us in our need for closure or cease our speculation so as to rest within emphatic and empathic emptiness.

A penetrating but non-echoing pebble passing through surface of pond

Posted by meetingbrook at 6:16 AM

as democracy is dragged behind horse down dirt road


Angus King and Elizabeth Warren would change that.

Last chance to avoid the awful prospect of a Clinton/Bush family shoving return.
Posted by meetingbrook at 5:36 AM

just this here we are

Our particular form will dissolve. What once was thought of as being in one place at one time will fade. What will occur will be the realization that what once was will no longer be applicable.

The dissolution from particularity into singularity will occur as time releases its constraint over our appearance, when location drops its spatializing configuration of our space, when solidity relinquishes its hold on concrete evidentiary placement.

Jnana, knowledge, will yoga us into union, unity. Karma, action, will yoga us into non-duality. Bhakti, devotion, will yoga us into loving perichoresis. Raja, meditation, will yoga us into concentrative awareness and distinctive non-separation. Integrality will absolve Union of any mechanical collection and move what once was along parallel tracks of transparency and transcendence toward prospective point vanishing anon into an anonymous and ubiquitous silently sounding convergence conversation with surrounding emptiness, what we once called love, but now returns to its nameless origin -- pure gaze.

You know what this is.

We bow to one another in passing.

Hands together, tilting forward at waist, eyes fond at presence of who and what is there.

We smile at appearance.

We sorrow our past I attention. Our disheartening inattention.

We delight our present surrender.

There is nothing
Else
Just this
Here
We
Are 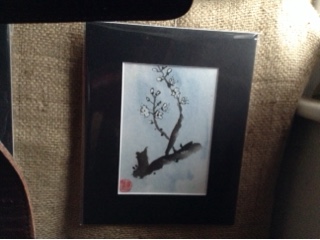