Time will go by and

It will be hard to recall

Who or what he was

The next thing you know

Someone will say ‘He was good’

as sure as rain

And I will fall dead

Posted by meetingbrook at 11:29 PM

steps on me, over body

on her way elsewhere

Posted by meetingbrook at 8:26 AM

No one expects the Spanish

Posted by meetingbrook at 8:01 AM

Get is closed. Anyone

know why get is closed? Damn odd!

Posted by meetingbrook at 7:30 AM

I hear what you are
saying, Thay is dead, gone. Yes.
Thanks! If you will now
excuse me, I have to bring
Thay’s breakfast to where he sits
Posted by meetingbrook at 7:19 AM

what did you say? I

thought I heard you say I'd be

I know I'm a peasant girl

but your ask is beyond dumb

Posted by meetingbrook at 12:29 PM

things as they are in themselves

What time is it?

What age do we live in?

Is now all that exists, now being the emergence of everything in infinite space of mind?

The uncrowded and undistributed home of multitudinous facticity and factotums laboring in vast emptiness to accommodate existence, being, possibility, and asynchronous arrival?

One such prayer-pericope of temporal piety, the Angelus

Posted by meetingbrook at 9:42 AM

Rain, it could be snow,

singing of arms and the usual suspects

Is it ours not to prohibit or sandbag what is taking place, or to stand as hapless witnesses as facts march by and morph into columns of history?

Someone, I suppose, tells the tale. A retrospective, not cautionary.

Out of the experience of such thinking comes the first piece.

the thinker does what a poet does -- dichtet. We have no word for it

in English. I had tried "poetize" for dichten, but it has the wrong

connotation and excites annoyance in those who feel for the lan-

poetry or other literature; to invent something fictional, make it

up, imagine it. So it gets translated rather as poetry, or the writing

of poetry, and often, where the word "poetry" appears, it is well

to remember its sense as a verb, as naming the act of composing

where poetry is the activity that corresponds in a neighborly way

to singing and thinking.

TRANSLATIONS AND INTRODUCTION BY Albert Hofstadter 1971)

The song of Ukraine is being composed. Millions of feet making way through men's eyes and women's hearts from their cities, across borders, through pain and suffering, into confusion of circumstance, incredulity of mind, and sorrow of soul.

So has it been, from long ago up to present, the paralysis of populace, politics, and empathy -- antagonistic ideology and covetous greed, the way of men who do not care who is pained.

The Aeneid, Book I, [Arms and the man I sing]

Arms and the man I sing, who, forced by fate

Long labors, both by sea and land, he bore;

And in the doubtful war, before he won

The Latin realm and built the destined town,

And settled sure succession in his line;

From whence the race of Alban fathers come,

And the long glories of majestic Rome.

From Book One of The Aeneid by Virgil, translated by Edward Fairfax Taylor. First published by J.M. Dent & Sons Ltd., London, 1907.

Out thoughts are tired. Our prayers weary. The prose thinkers wonder "Where is god?" Poets are too cranky to ask such a useless question. They know where god is.

Living in a hermitage is like living in a reverberating emptiness. There's no address or phone number for god.  God is not yet. Not yet here. Not yet the other end of prayer. Not yet near.

Are hermits cranky? Yeah, they're cranky. Why is that? Hermits suspect something ordinary believers don't suspect. They suspect that god is suspect.

1 have an idea or impression of the existence, presence, or truth of (something) without certain proof: if you suspect a gas leak, do not turn on an electric light | [with clause ] :  she suspected that he might be bluffing.

• believe or feel that (someone) is guilty of an illegal, dishonest, or unpleasant act, without certain proof: parents suspected of child abuse.

2 doubt the genuineness or truth of: a broker whose honesty he had no reason to suspect.

a person thought to be guilty of a crime or offense: the police have arrested a suspect.

not to be relied on or trusted; possibly dangerous or false: a suspect package was found on the platform.

Middle English (originally as an adjective): from Latin suspectus ‘mistrusted’, past participle of suspicere, from sub- ‘from below’ + specere ‘to look’.

Looking under ordinary belief -- or, looking from under -- one is surprised to find a vacancy of any supporting foundation to hold up the construct of thought engineered for structural confidence. Put differently, as some do these days, God is looking for someones, anyones, to bring into Being what God is meant to be.

God is not an historical fact. God is that which is coming to be. Not once and forever, but now and then.

God is the moving appearance of that which is God in each and every instance that God is needed to be in existence.

Looking as-is God is-as looking. This is the palindrome of presenting God -- the same backward or forward.

Is it possible to love what is coming to be?

(Be careful -- there are many who crave the lightless dark of cynical control.)

Think God -- be a poet -- "have an idea or impression of the existence, presence, or truth of (something) without certain proof"

Suspect what is being created with each sighting worded breath, each breathing worded sight.

when you're not looking --

Posted by meetingbrook at 2:43 PM

No one takes his joy

Some who’ve lost their way

Posted by meetingbrook at 6:40 AM

I watch grace and intellect

Sitting at desk in confirmation hearing

I watch smallness and cynicism

Yapping and sniping at black woman

They can’t hope to equal

The ugly senators falling in their vomit

The beautiful judge being beaten up but

Never lowering to their gutter

In America these days

As are disfigured souls unworthy

Posted by meetingbrook at 11:04 PM

(In your hand, O Lord,  are all the ends of the earth)

(-from psalm at Matins)

Where have the dead gone?

Disappeared off edge of earth —

If thinking is seeing, look

Posted by meetingbrook at 7:38 AM

logic corresponds to given laws of nature

Posted by meetingbrook at 11:50 PM

Have you come here to

be alone? Think again. We

Posted by meetingbrook at 8:27 AM

russia remembers the blokadniki, if they remember to remember 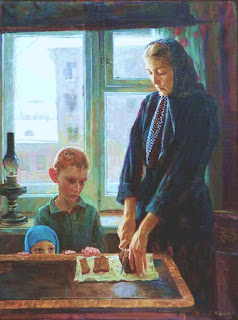 Bread During the War,

Posted by meetingbrook at 7:18 AM

poets can spare some words for the dead

I watch "Seats At The Table" a documentary film by Chris Farina (Rosalia Films).
Then this:

Barskova: I think you are touching here upon a very important question: for whom — that is, on whose behalf — do we speak? We know (that is, we were taught) that literature is nothing but a dialogue — continuing through time. And, allegedly, we can choose our interlocutors. What interests me, perhaps, are interlocutors having speech troubles. A million blokadniki — the inhabitants (including dozens of poets) of besieged, starving Leningrad, the city where I grew up. In spite of all our efforts, we’ll never hear from most of them, they are traceless in history, voiceless. And something really upsets me about that, really troubles me — and makes me write. That was the case with Zinaida Bykova, the hack translator who disappeared in the snow drifts of the dying city: this very word “disappeared” fills me with anger towards history and tenderness towards her. Yet, obviously, it’s not only about the tragedy of the Siege. The disappearance of Catullus, or, differently, of Pushkin or Chekhov also ignites some reaction of writing — Chekhov spent his last years coughing up blood, with his voice completely changed. Because of TB, he looked like an old man at 42, and he already knew that he’d never write that novel of his. It might be a delusion, it might be a grave moral mistake, but I feel that sometimes poets can spare some words for the dead.

Auden said, “poetry makes nothing happen,” and we’ve been wondering ever since — are we so impotent, so powerless? Poetry cannot shoot, cannot heal, cannot abolish death. Poetry’s jobs are minor: to comfort a mourner, a lover, for a brief moment. Elegy, one of the earliest forms of poetry, was born as funeral song. As I see it now, the job of consolation is crucial, the job of giving medicine — even if it cannot bring anybody back to life, it can patch the texture of life as it is, make it softer, warmer. Damn it, make it prettier.

(-from, A Conversation between Polina Barskova and Valzhyna Mort, The Calvert Journal, 26Nov2021)

Sometimes our interlocutors are inside prisoners and some are outside university students who sit together for a semester studying themselves and Russian literature.

And who knows which is which.

Posted by meetingbrook at 7:41 PM

learning to walk away from what you think is true

“You have learnt something. That always feels at first as if you have lost something.”

You have lost something. You've lost the belief that things are as you thought they were.

They're always as they are

There's no changing that

There's only the deep feeling

Things as they are

Good and bad are not separate from one another.

Posted by meetingbrook at 7:10 PM

It occurs to me that each greeting we engage in is one filled with both curiosity and wonder. Who is this person? What is this place? How do I make way through this situation?

My name is Bill Halpin and I've taught as an adjunct lecturer for UMA since the late 80's. I began in the old Maine State Prison in Thomaston in '88 or '89 and migrated in early 2000's to Warren and up to the present

I've taught philosophy; fantasy, myth, and enchantment; ethics; East Asian thought; philosophy of education; aesthetics; bible as literature; the code of the warrior; existentialism; poetry and autobiography -- and several other topics -- all at Maine State Prison. It has been a gift to have been so invited.

I am pleased to be part of the PEP Fellowship and look forward to learning what wonder continues to offer. I find myself interested in the pedagogy of presence. I'd like to think further with others about what the German notion of mit-sein, (being-with), contributes to education for carceral students. To be present goes beyond just standing next to another. Prison throws those living there into unrelenting proximity and difficult nearness. What, I wonder, would an ongoing education -- (a "leading out") into more reflective, thoughtful, insightful, and liberating understanding of oneself, other ones, and the structures of thought and society that surround and impact us -- what such dwelling-thinking would contribute to the individual student and, expansively, to the system of incarceration?

I'd like to contribute to a pedagogy of mit-sein (to be-with) that can be looked at across the spectrum of disciplines of study so as to assist in knitting a community of sorge (German = care/concern) and aletheia (Greek, ἀλήθεια = unconcealedness/truth) going forward.

Good to meet you!

Posted by meetingbrook at 10:57 AM

Because he doesn’t know god

Posted by meetingbrook at 11:26 PM

you were a difficult friend

Posted by meetingbrook at 7:35 AM

Posted by meetingbrook at 7:29 AM