freedom at the very beginning

If any of you thinketh to be wise in this age,

then let him be foolish, in order to be wise.

For the wisdom of this world

is foolishness before God...

The title of this book demands an explanation. The philosophy of freedom does not signify here an investigation of the problem of freedom as one of the problems of philosophy, for freedom does not signify here an object. The philosophy of freedom means here -- the philosophy of the free, a philosophy, issuing forth from freedom, in contrast to a philosophy of slaves, to a philosophy, issuing forth from necessity, for freedom signifies the condition of the philosophising subject. A free philosophy is a philosophy religious, a philosophy intuitive, a philosophy of sons, rather than of step-sons. The path of this book issues forth from freedom at the very beginning, and does not arrive at freedom merely at the end. It is impossible to deduce freedom from anything, in it is possible to dwell only from the beginning. Divine truth also is impossible to deduce, it becomes manifest like a flash of lightning, wholly given within its revealing. This its firm and unwavering faith consists in this, that truth is given within mystical apperception, that it is impossible to act, impossible to be understood, without having under it a solid footing of the Divine, a Divine foundation, without having graced an assist, being thus instead forsaken and forlorn and sundered off from the universal soul, -- such defines the character of the exposition of this book. Within it there consciously transpires a method of issuing from, and not arriving at, of an issuing from that what is revealed, gleaned as an illuminating light, rather than of arriving at that which still remains unrevealed, unseen and immersed in darkness. This is the path traversed by all the mystic-thinkers...

It is our beginning that that many of us fear, not our end.

It is freedom we find frightening, not captivity.

Like the zen saying “seven times down, eight times up” we forget our origin.

Posted by meetingbrook at 8:33 AM

“The sound of a voice* is the harbinger of the truth contained therein.”

To reference presidential candidates in final days before election alongside beauty of the silence of god, companionship of co-monastic, pre-rain scent of wavering leaves nodding with our conversation— might seem unseemly.

But listen to their voices.

Hear the challenger’s pathos and compassion.

Hear the incumbent’s bathos and pusillanimity.

Both tone and timber, resonance and responsibility, sensitivity and scrupulosity for truth must be the audial authenticity and audacity for our wounded souls in this time in the place wherein we dwell on edge of teetering civilized concern and care for one another.

We, listening, with profound attentiveness.

Must we verse ourselves with the adverse and perverse before a true voice sounds through?

Posted by meetingbrook at 10:10 AM

The mind of America is antagonistically dualistic.

One to one combat. Eliminate the other.

using the etymology of silence

It has been a point of interest that language conceals as much as it reveals (cf. Heidegger). And it has been a long practice to manipulate language to present or represent thought in a way from which thought cannot protect itself.

We are victims of a monstrous irrationality

- which we call 'means of communication' -

but which in actual fact obstructs real communication.

A vast machine which processes 'events' and reduces them to gibberish

in which reality is a total loss."

In our current political babble emanating from a desperately chicanerous incumbent there is a more than likely chance that meaning and truth are absent guests in the house of human communication.

[Gottlob Frege, 1848-1925] presents us with a dilemma that lies at the heart of his lifelong attitude toward language. On the one hand, language is indispensable for us in order to get access to thought. On the other hand, language – because of its sensible character – obscures thought (which by itself is insensible). Thus, Frege saw himself forced to deal with language by way of a continuous struggle – fighting the distortions that are imposed on thought by language, and diagnosing as well as clarifying the misunderstandings that result from these distortions.

But why is language indispensable for thought, and why did Frege think that it is? These two questions are central for an understanding of the rise of philosophy of language in general, and of Frege’s engagement in philosophy of language in particular. They are important because, if it turns out that we cannot find a convincing reason for the indispensability of language for thought, then the struggle with language that Frege is talking about above would not seem necessary for philosophical inquiry: we could just circumvent the obstacle of language and access our concepts and thoughts directly. Historically, dealing with the second question in particular might give us some insight about the extent of Frege’s possible indebtedness, or lack thereof, to earlier conceptions of the relations between language and thought and language as such.

Thus, it would be worthwhile taking a closer look at the two traditional functions of language with regard to thought that Hobbes and Locke distinguished in the context of their respective epistemological reflections. These were: (a) the indispensable assistance of language to memory, or to the representation and recording of one’s own thoughts, and (b) its role as a necessary vehicle of the communication of one’s own thoughts to other people.

The advertising and propaganda forces are in full gear and surrounding our houses breaking in doors and shouting warnings to drop to the floor and submit to their orders to not resist.

Using the etymology of silence, let your attentive emptiness dissolve the insubstantial foolishness of desperate charlatans.

Hear nothing with discerning heart.

“Let nothing disturb you,
Let nothing frighten you,
All things are passing away:
God never changes.
Patience obtains all things.
Whoever has God lacks nothing;
God alone suffices.”

May we be happily sufficed!

Posted by meetingbrook at 8:29 AM

no recourse to force or compulsion.

Man I know used to say he was an anarchist. I think of him now. Executive Branch a cartoon in a cheap newspaper. Supreme Court a work-crew of cultish guys and gals dismantling laws and propping a criminal demagogue. A senate of ambulance chasers suing citizenry for the remainder of their pocket change. A justice department chanting the mantras of a decadent guru who spoils everything he touches.

Take it down, he’d say, ignore them, all of them, practice civil disobedience, laugh at them and go about your business, go on with your day. Let them devour one another, rob the treasury, launder money, defame everyone refusing to kowtow, stink up the place.

I wonder where he is these days. What he’d say now?

Was his rhetoric a passing phase of anger and disappointment? Do we deserve the leaders we have? The court we have? The sadness that covers everything?

I’m not an anarchist.

I’m nobody and nothing.

I’m happy in my emptiness.

And if this country and its artificiality collapses in on itself? (As it certainly will.)

Nothing else exists but compassion, loving kindness, and wisdom.

No recourse to force or compulsion.

Where you are that.

Where each is that.

Where what is coming-to-be says:

Posted by meetingbrook at 7:11 AM

there is one thing

As woman reads from 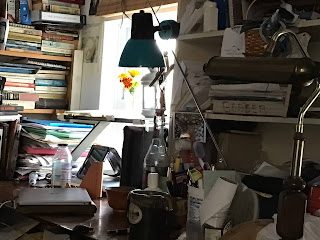 * cf. Sekito Kisen’s Sandokai: The Identity of Relative and Absolute – Part 1
Posted by meetingbrook at 9:44 AM

a nonagenarian sangha friend sends us a monday poem

what i have shaped into

a kind of life? i had no model.

both nonwhite and woman

what did i see to be except myself?

i made it up

here on this bridge between

my one hand holding tight

my other hand; come celebrate

with me that everyday

something has tried to kill me

Posted by meetingbrook at 8:59 AM

Don’t wear a mask. Die. This is how Republican politicians see things. A sad reality.

I disagree. Wear a mask. Live. Reject the angry hostility that hates you.

Stay home. Vote. Decide to love even those who don’t want any love. Stay hidden. Love without noise.

Nature, said Heraclitus, loves to hide. Be natural. Stay obscure. Be so transparent you are invisible.

That’s it. The source of existence is emptiness. Nothing precedes us and also follows closely. Be that.

Posted by meetingbrook at 11:08 PM

they arise and they pass away

We are meant to find joy. Each moment. Each breath. Each glance.

Walking mountain with friends yesterday. He a friend for fifty seven years, we started together on college basketball team. We immersed Franciscan life for five years before New Year’s Eve 1969. We studied simplicity and classical languages along New York side of the Delaware River, contemplation in hills of northern New Jersey, philosophy near beach in New Hampshire, and philosophy/theology in nation's capital in Washington DC. We lived this pax et bonum between Kennedy assassinations. Brothers still, seldom in one another’s company.

The simplicity of it.

I think it is true of many of us that we don’t notice what a gift it is just to be alive. How could we not notice? Well, we sort of take it for granted. But this gift is not without its problems. One of these problems is actually the very thing that made me realize how awesome life is, what a gift it is and how much I appreciate it. That is the fact that life is evanescent, impermanent. It is precious because we can’t just take it for granted. When we realize this, we may wonder, “Well, if my life is a gift, how shall I use it, how shall I give it back, how shall I express my appreciation for it, or completely live this life which is wonderful and evanescent?”

What is this whip? This whip is just that evanescence of life, just that teaching of impermanence. One of the Buddha’s most significant teachings is to hold up impermanence for us to see, but actually it is just how things are—anything, anytime, anywhere. There is a Pali chant which expresses this:

All things are impermanent
They arise and they pass away.
To live in harmony with this truth
Brings great happiness.

If you see how things are, “things as-it-is” as Suzuki-roshi used to say, you see that they arise and they pass away. The trick is to live in harmony with the way things actually are; our suffering comes from wanting things to be different than they are

We take time to speak, the four of us, at brunch on porch warmed by sun going lower in October sky. Politics, spirituality, COVID, health, dogs, yogurt with fruit, eggs with cheese and bacon, bread with peanut butter and marmalade.

Senator King of Maine uses phrase “impropriety in real time” about the pushing through of Supreme Court nominee by republicans eight days before election.

There is a cold pall over the nation. We do not have a sane intelligent president and the country will decide over the next few weeks whether unintelligent insanity is what is wanted going forward.

Many are concerned. A woman at Sunday Evening Practice said she is frightened.

“Get lost,” says the angry voice.

And we do not know where we are.

”Be here,” says the compassionate one.

And we look around. We’re home.

“The healing is in the return … Not in not getting lost in the beginning.  (Sharon Salzburg)

No, we are never not within our home and at origin.

This morning, light comes up over near hill.