Posted by meetingbrook at 7:24 AM 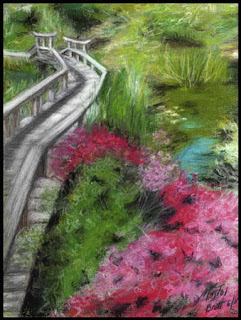 at first sight, walkway
seems empty — at bridge, at heart,
there is (MU) one there

(e-card image from gratefulness.org; haiku by wfh)
Posted by meetingbrook at 8:47 AM

I am pleased for Tony Sanborn.

I know him as a good man.

In Hosea 6:6, some clarifying and difficult words: “For I desire mercy, not sacrifice, and acknowledgment of God rather than burnt offerings.”

May Jessica Briggs rest in peace.

May the Sanborn and Briggs family live their lives in peace.

And may Hosea’s words both disturb us and burrow into our meditations.

Good for Anthony Sanborn for his exit from prison. And good for Fairfield and Zerillo for their work on his behalf and in the name of responsible justice.

The murder of Jessica Briggs was a terrible event. The clear and definitive resolution of responsibility for her death does not appear to be any closer.

The “elegant solution” allows a good man to resume a life in our community. It also reminds us that fair and responsible justice remains a fragile commodity in the hands of a powerful law enforcement and prosecutorial system perennially in need of oversight and review.

The Sanborn case serves as warning and instruction.

We have work to do.
Posted by meetingbrook at 5:46 AM

At prison today, an academic symposium.

Learning, such as this, cannot be found anywhere else.

Men asking, and answering, what it means to engage in education.

From bottom up.
Posted by meetingbrook at 9:19 PM

coming to word; coming to body

Violence is the failure to see our way clear.

Hatred is the failure to see the Way through.

What is our way? What is the Way?

This is our body. All of this.

It is time to incarnate.
Posted by meetingbrook at 8:30 AM

Or, as someone we know likes to say, we’re just finding out what always has been in hidden operation. Ok. The man in the White House is only the public face of real power brokers and billionaire backroom manipulation of public belief in everyday democratic participatory republic consensus.

The ‘people’ are not in charge. Nor are they revolting. Everyday people and ordinary life are outside the concern of those growing in power and wealth.


The power elites attempt to discredit those who resist. They force them to struggle to make an income. They push them to the margins of society. They write them out of the official narrative. They deny them the symbols of status. They use the compliant liberal class to paint them as unreasonable and utopian.

Resistance is not, fundamentally, political. It is cultural. It is about finding meaning and expression in the transcendent and the incongruities of life. Music, poetry, theater and art sustain resistance by giving expression to the nobility of rebellion against the overwhelming forces, what the ancient Greeks called fortuna, which can never ultimately be overcome. Art celebrates the freedom and dignity of those who defy malignant evil.Victory is not inevitable, or at least not victory as defined by the powerful. Yet in every act of rebellion we are free. It was the raw honesty of the blues, spirituals and work chants that made it possible for African-Americans to endure.

Resistance requires eternal vigilance. The moment the powerful are no longer frightened, the moment the glare of the people is diverted and movements let down their guard, the moment the ruling elites are able to use propaganda and censorship to hide their aims, the gains made by resisters roll backward. We have been steadily stripped of everything that organized working men and women—who rose up in defiance and were purged, demonized and killed by the capitalist elites—achieved with the New Deal. The victories of African-Americans, who paid with their bodies and blood in making possible the Great Society and ending legal segregation, also have been reversed.

(-The Cost of Resistence, by Chris Hedges, in truthdig, 5nov17)

It is difficult to remember that the human spirit longs for what might be called Itself.

This Itself is reality without corruption or distortion. Without spin, yarn, denial, or hype.

The Itself was once called Truth. It was simple, stark, and sovereign. Above the hazy fog, above and beyond, is the luminous light of this galaxy’s inexorable star blazing necessary centricity for our ability to thrive and grow.

But the Itself is not enough for many of us. Instead, we seem to gravitate to that which is not itself, that which is artificial, substitute, lesser, derivative, less true, even false. In our ignorance of what is real, in our greed for what is false, and in our angry delusions positing ‘other’ and ‘enemy’ — we fail to see and feel that which is actually nearest to our very center, namely, reality/truth/itself.


"In the long run, no one can show another the error that is within him, unless the other is convinced that his critic first sees and loves the good that is within him. So while we are perfectly willing to tell our adversary he is wrong, we will never be able to do so effectively until we can ourselves appreciate where he is right. And we can never accept his judgment on our errors until he gives evidence that he really appreciates our own particular truth. Love, love only, love of our deluded fellow man as he actually is, in his delusion and in his sin: this alone can open the door of truth. As long as we do not have this love, as long as this love is not active and effective in our lives (for words and good wishes will never suffice) we have no real access to the truth. At least not to moral truth."

It is voting day.

Maybe this time something good will come of it.
Posted by meetingbrook at 8:11 AM

In 1968 we thought the world was coming apart. It did.

In 2017 we know the world has not only come apart, it has been kicked into the gutter.

Call me sentimental, but it’s perfectly clear that delusion and insanity have become the default ground of everyday activity and thought.

Now that I’ve given my credentials as a failing human being, I bow my head in expiation.

to know you’re not there

Zen masters would slap you upside the head. So would inner city mommas and drill sergeants and boxing trainers and someone suddenly realizing they’ve been standing just outside the universe in a deep void of detached forgetfulness.


Ms. Langer: Most people are just not there, and they’re not there to know that they’re not there. And when I address the difference between mindlessness and mindfulness — so since my mindlessness was leading in my thinking, there was no reason for me to appeal to anything Eastern. This was all a Western scientific notion as I was developing it.

So the Eastern notions — I did research, again, back in the ’80s, on transcendental meditation, and that’s also — meditation is also useful, but it’s quite different, and different ways of getting to the same place. Meditation, no matter what kind of meditation, is engaged to produce post-meditative mindfulness. And the mindfulness, as I and my students…

Ms. Tippett: You’re saying it’s a means to an end, and you’re going straight to the end.

Ms. Langer: Exactly. So for us, you’re noticing new things. You’re there. And I think that over the last ten, maybe even 20 years, that if you look at all of the different forms of treatments to become more mindful — this means to the same end — that they have become more and more like what we’ve been studying from the beginning. Meditation that used to be required 20 minutes twice a day is slowly changing.

(-Ellen Langor in conversation with Krista Tippett, Science of Mindlessness and Mindfulness, On Being)

At Friday evening conversation two attendees said they are future oriented. I realized I have no future in my attention.

Now and here seem to be sole attendants to my cell of solitary unconfinement and ever-present origin refinement.

For the time-being, that which surrounds the inner core of timeless mirroring ubiquity, it is our instant to instant practice to gassho and bow, sit ready and stand alongside what-is here-now in its very appearance.

Last night I held the hand of someone in dimly lighted room in hospice house. She welcomed me with this holy human hospitality. We sat in silence. Just that. Sharing what was there. Then, a family member returned. And we touched hands.

Today’s difficulties look at us, and seeing no one there, choose to evaporate.


“Mindlessness is the application of yesterday’s business solutions to today’s problems.”

“And mindfulness is attunement to today’s demands to avoid tomorrow’s difficulties.”   (—Ellen Langer)

I don’t know the difference between life and death.

It seems mindless of me.

It seems we believe there is a difference.

If I had any beliefs they would be looking toward a realization that any sip of coffee, any glance at November leaves, or added hour in an arbitrary designation of time, is the whole of new light shining through and through each being arising in awareness of deep intimacy and perennial presence.

Bells announce what is brought to mind.

Sounding, as each thing does, the beginning-ending, the ending-beginning of everything.
Posted by meetingbrook at 7:38 AM