The uncertain is a landscape we gaze into trying to identify what we are seeing.

We are that landscape.

It is what we are.

The self-nature of suchness gives rise to thoughts. But even though the six sense-faculties see, hear, sense, and know, it is not tainted by the myriad images. The true nature is constantly free and self-reliant.
- Platform Sutra

No need to identify.

In that immediate and intimate act.

You come to be.

Free.
Posted by meetingbrook at 10:19 PM

Watching Jeremy Rifkin's talk based on his book The Empathic Civilization: The Race to Global Consciousness in a World in Crisis.

We've really got to talk.
Posted by meetingbrook at 11:04 PM

In the dark wind gusts pushed bow of peapod from its track. It was a good row demanding strong concentration. Alone and attentive with every stroke.
The kindness of a mariner who motored to 30 yards of my rounding the currents and waves buffered by swirling blow -- when he saw I was just fine, he circled away.
Attention is never alone.

Aristotle said that in order for people to become virtuous, we need role models—others who have developed their capacities for courage, self-control, wisdom, and justice. We may emphasize different sets of virtues or ideas about what makes a proper role model, but Buddhism also asserts that, as we are all connected and interdependent, none of us can do it all on our own. 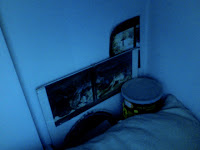 We're not thinking yet.

We are frozen in thoughts and concepts.

But we're not thinking yet.

It is a call, thinking is.

And we are being called.
Posted by meetingbrook at 11:35 PM

The Mind is neither large nor small; it is located neither within nor without. It should not be thought about by the mind nor be discussed by the mouth. Ordinarily, it is said that we use the Mind to transmit the Mind, or that we use the Mind to seal the Mind. Actually, however, in transmitting the Mind, there is really no Mind to receive or obtain; and in sealing the Mind, there is really no Mind to seal. If this is the case, then does the Mind exist or does it not exist? Actually, it cannot be said with certainty that the Mind either exists or does not exist, for it is Absolute Reality. This is expressed in the Ch'an Sect by the maxim: "If you open your mouth, you are wrong. If you give rise to a single thought, you are in error." So, if you can quiet your thinking totally, all that remains is voidness and stillness.
(-- from, The Dharma of Mind Transmission, Zen Teachings of Huang-po)

Might as well buy that small house in Aspy Bay and begin it while being done with it. Five bedrooms. There could be guests. And long walks on a long beach.

the finger
by Charles Bukowski

the drivers of automobiles
have very little recourse or
originality.
when upset with
another
driver
they often give him the
FINGER.

I have seen two adult
men
florid of face
driving along
giving each other the
FINGER.

well, we all know what
this means, it's no
secret.

still, this gesture is
so overused it has
lost most of its
impact.

some of the men who give
the FINGER are captains of
industry, city councilmen,
insurance adjusters,
accountants and/or the just plain
unemployed.
no matter.
it is their favorite
response.

people will never admit
that they drive
badly.

the FINGER is their
reply.

the FINGER is a mind-
set.
we are the FINGERERS.
we give it
to each other.
we give it coming and
going.
we don't know how
else to respond.

what a hell of a way
to not
live.

It's hard to imagine a sillier way to live than blowing each other up and shooting bullets into one another.

Maybe after we spend the additional recently allocated 59 billion dollars on our warring Afghanistan we'll drop a dime on stupidity and turn it in. 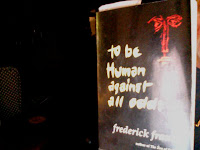 Stupidity is tired and wants and deserves to be taken off the streets.

To be replaced by something -- something more kindly.
Maybe there's a chance of becoming human -- for a change.
Posted by meetingbrook at 11:17 PM

Are there words?
It is possible the world is more dangerous than we think.

What really matters is to be aware, not wary.

Unmoving, it presents itself in a thousand shapes.
And when it moves, it doesn't reveal itself in anything.
What is the essence of this nothingness?
Chrysanthemums luxuriously blooming after frost.
- Taego Bowoo (1301-1382)

Cicadas! A few days early, but their chant begins.

There are 5589 US casualties as of 25July2010 in Iraq and Afghanistan. Sorrow for their deaths.

And sorrow for all who have died in these countries in the wars, terrorism, and other related causes.

There are no words.

None.
Posted by meetingbrook at 11:59 PM

After Sunday Evening Practice we take Gerard home and go down to peapod. It is large moon one day short of full. We row out and around Curtis Island in the dark silvery wake of moonlight. Green blinking lighthouse, we pray for Connie, chant Nunc Dimittis, and pull hard against northwest wind back into harbor.

Silvery moon hangs high in the sky.
I ride a tiny boat in the vast and misty sea.
Moon and sea forgotten;
I forget that I have forgotten.
And before the window
I sit quietly in meditation until midnight.

I think during 12 hours on the road today that the traditional repartee still makes sense: The Lord be with you! And with each breath you take.

The City, Berobed in Blue
by Eleanor Lerman

What do you think has come over me?
I did not feel like this yesterday
but today, all I find myself thinking is,
This could be my last apartment,
my last lover; this could be the last dog
I ever own—as if I were going to die
at any moment. Which of course
is possible (myocardial infarction,
genetic defect, lighting bolt)

The anxiety may pass, but not
the age. Yikes, every moment says
And then, Look out!

Well, what can be done but put
a good face on it? A big one,
round as a moon and glittering
to the last. Or maybe slide into
an om state, where nothing is
something and everything is
more or less of something else

Better yet, maybe it's time to think
about the city, berobed in blue,
which now appears to me in memory
as a good place for a young girl,
who only I can recognize

See how lightly she steps off into
another, and then another morning
And as if she has never done it before,
begins to breathe
(Poem, "The City, Berobed in Blue" by Eleanor Lerman, from The Sensual World Re-emerges. © Sarabande Books, 2010.)

To be in communion is best.

Wholeness is with us in each breath we are given!
Posted by meetingbrook at 11:01 PM

Sunday.
At the hermitage we find that to oppose is to draw a tight box around what you oppose -- with you on the inside. Better to invite what you are uncertain of into an open questioning circle -- which is loose, laissez-faire, and liberating. That the circle is perimeter-less and permeable makes the questioning circle-back upon itself while spiraling toward unreachable and ungraspable extension of itself. In other words (my mother's favorite phrase) there's no end to it and no one knows how, where, or when it began or even whether there was a beginning.

This is God's name and face -- unpronounceable and diffusely unrecognizable. It is silly to even try to employ metaphors and words about this inquiry. Silly and foolish.

Still, being a fool becomes me as I become some other being. 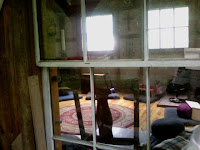 Among the many realizations to which I awakened was this: "You don't have to go to church to know God." For reasons too obvious to mention, this isn't the kind of message the church, or any religion, wants spread around. But it's true nonetheless. There is no religion, not even the Christian religion, holding the title deed to God. God's grace is not limited to a select few. The moment any religion believes it is, you can be sure that religion knows nothing of God.

If there is anything Jesus, and the Buddha, made abundantly clear it is that the wind blows where it will. You can hear it, see its effects, and feel its power, but you can never contain it. In other words, the moment I stopped trying to find God, God found me. I love the way Deepak Chopra once framed it: "God is not difficult to find; God is impossible to ignore."

Even the title to this article, "Finding God After Religion," seems to imply that there's something you must "do" to know God. But the real truth is this: there is nothing you need to do to know God. You know God already. The mistake that virtually all religions make, including Christianity, is to confuse beliefs for faith and, as a consequence, condition people to think that there are things that they must do, duties that they must perform, etc., for God to be pleased and her presence to be known.

Finding God after religion? Remember the following: In Eastern thought, there's something called "the law of least effort," or "do less and accomplish more." If you will give up the "doing" and, instead, just enjoy "being," I think you'll make a great discovery. The psalmist said, "Be still and know ... " In my own experience, I have found that when I'm present (and that's my spiritual practice), I'm immediately in Presence, the real and sacred sanctuary of God.

(from, Finding God After Leaving Religion, by Steve McSwain, author of, 'The Enoch Factor: The Sacred Art of Knowing God', Posted: July 24, 2010 11:23 AM,
http://www.huffingtonpost.com/steve-mcswain/finding-god-after-leaving_b_651148.html)

Saskia and I chant Lauds in chapel/zendo. Dog stays on porch. Cat surveys any movement from loft.


19 Consequently, you are no longer foreigners and aliens, but fellow citizens with God's people and members of God's household, 20 built on the foundation of the apostles and prophets, with Christ Jesus himself as the chief cornerstone. 21 In him the whole building is joined together and rises to become a holy temple in the Lord. 22 And in him you too are being built together to become a dwelling in which God lives by his Spirit.
(Ephesians 2:19-22, New International Version)

"Being built together to become."

This is my church, my religion, and my spirituality.

Chipmunk scampers over lichened rocks. Phoebe alight then depart felled tree limb. Dean brings David Bodanis book on E=MC2 and Roger Collins' Keepers of the Keys of Heaven, A History of the Papacy to where I sit on this porch.
Cheryl also visits with Cynthea Bourgeault's The Wisdom Jesus: Transforming Heart and Mind--A New Perspective on Christ and His Message -- which we will read from and converse about the next several Tuesdays at Pilot to Practice.

We are here to converse with Being Itself Becoming Itself.

There are no priests or preachers, no imams or rabbis, zen masters or chief executive officers, no tenured chairs or gurus of any stripe.

Only each of us.
Come round. Look around. Circle yourself. Encircle everything.
With loving attention