This is the current condition of salvation. Not salvation in the churchy sense. But salvation in the preservation, reclamation, lifeline sense of continuing to move through this world without succumbing to insanity, distraction, dissolving of decency, and loss of grounding in what is real.

Human beings slowly become inconsolably unkind and unmoored. Taking from others to benefit only you and yours. Stopping others from exercising freedoms and rights. Numbing and hallucinating mind and body with merde and mindlessness. Full of going places, doing things, collecting prizes, causing suffering.

There is another way. Wu Wei. Learn and know when to act and not to act.

Find way through the insanity of our age.

Each person each being is a word ready to be read.

Learn to read; begin to see. 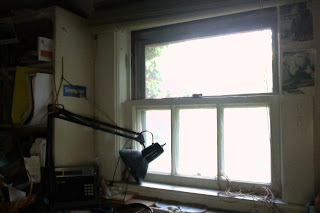 Tolle Lege, Take and read, this is word! This, what you see!
First:


Is there no way to cast my hook

Out of this dynamited brook?

The Fisher's sons must cast about

When shallow waters peter out.

I will catch Christ with a greased worm,

And when the Prince of Darkness stalks

My bloodstream to its Stygian term . . .

On water the Man-Fisher walks.

(--from, "The Drunken Fisherman," by Robert Lowell)
http://www.poets.org/viewmedia.php/prmMID/15278

now alone in your adversity in the company of Christ

only, but the people of God shall also remember that

your misgivings have become Sacred ...

has become certain, a source of sacred dread to others,

an earnest of salvation.

(--from, "Rites for the Extrusion of a Leper," by Thomas Merton)
http://www.thomasmertonsociety.org/altany1.htm
Posted by meetingbrook at 5:16 PM 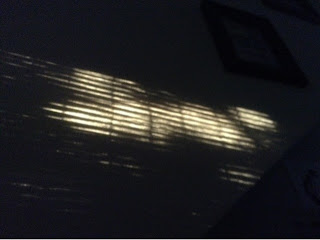 Chattering stories of their stay 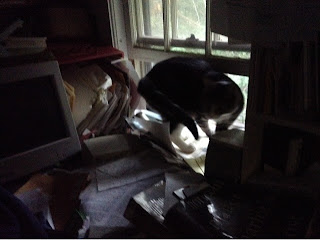 Cat at window turns from station 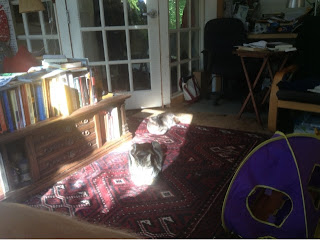 Wait for next train
Posted by meetingbrook at 6:24 AM

A lock picker I know learned his skill undoing the chain and padlock his parents wrapped him in as a kid after they went to bed drunk and left him around a pipe below the kitchen sink. 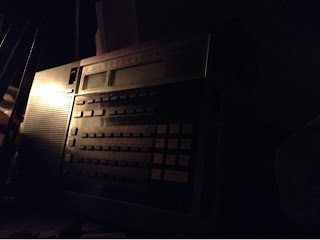 Posted by meetingbrook at 10:52 PM

See what can be, seen; then look away 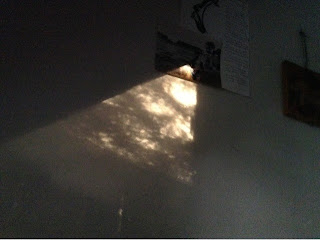 Sun rises from boy's picture holding shell in Haskell Cove many years alighting.
Posted by meetingbrook at 6:34 AM

The simplicity of it 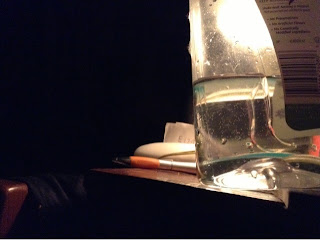 Posted by meetingbrook at 9:38 PM

There's no place else to go. 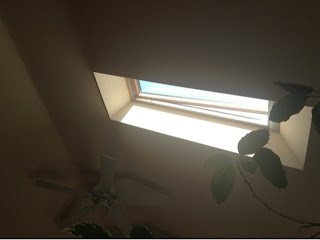 Besides, who is it that wishes to go anyplace else? 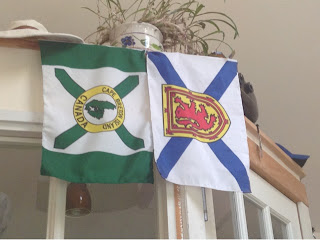 I look around. Everything there is here. 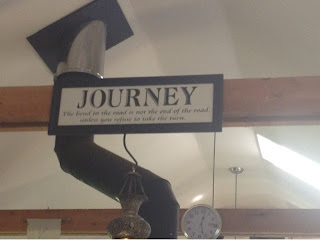 Turn this way or that way, walk in a straight or wobbly line in either direction, you'll probably find yourself returned right back here. 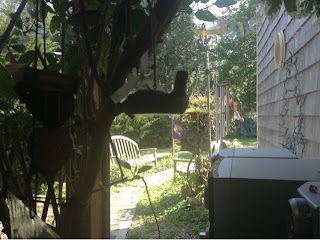 Like Loon hanging from hibiscus branch in midday warmth looking out over garden bench, I take my going slow, learning from stillness where I do not need to go.

Quid est enim novi hominum mori, cujus tota vita nihil aliud quam ad mortem iter est? (Seneca)
(What new thing is it then for a man to die, whose whole life is nothing else but a journey to death?)
Posted by meetingbrook at 12:39 PM

Ya Na; attending, another, alone, aware

The world is too mean without these types. The temptation to loot, steal, murder, drug ourselves silly, become petty and pitiable, stay in illusion, perpetuate delusion, use people, claim "it's to protect family,"  dissociate and dissemble, and mostly -- to lose trust, genuine affection, and integrity -- these temptations are too powerful for 98% of human beings to resist. All, it seems, fall under the wheels of this impossible to resist train.

Today is the feast of Bernard of Clairvaux, Abbot, Theologian, and Poet, 20 August 1153:


Bernard, third son of a Burgundian nobleman, was born in 1090. His brothers were trained as soldiers, but Bernard from youth was destined for scholarship. One Christmas Eve as a child he had a dream about the infant Christ in the manger; and the memory of it, and consequent devotion to the mystery of the Word made flesh, remained with him throughout his life.

Bernard had good prospects of success as a secular scholar, but he began to believe that he was called to the monastic life, and after a period of prayer for guidance, he decided at age 22 to enter the monastery of Citeaux (Latin Cistercium, appearing on modern maps as Corcelles-les-Citeaux, 47:10 N 5:05 E), an offshoot of the Benedictines which had adopted a much stricter rule than theirs, and became the founding house of the Cistercian (Trappist) order. (Actually, the Trappists are a reformed (i.e. stricter) offshoot of the Cistercians, who are a stricter offshoot of the Benedictines.) He persuaded four of his brothers, one uncle, and 26 other men to join him. They were the first novices that Citeaux had had for several years. After three years, the abbot ordered Bernard to take twelve monks and found a new house at La Ferte. The first year was one of great hardship. They had no stores and lived chiefly on roots and barley bread. Bernard imposed such severe discipline that his monks became discouraged, but he realized his error and became more lenient. The reputation of the monastery, known as Clairvaux (48:09 N 4:47 E), spread across Europe. Many new monks joined it, and many persons wrote letters or came in person to seek spiritual advice. By the time of his death, 60 new monasteries of the Cistercian order were established under his direction.

After a fashion, in erratic and chaotic manner, a daily life is lived under the guide-points of contemplation, conversation, and correspondence. These also translate from poverty, chastity, and obedience into another triadic: watching, listening, silence. 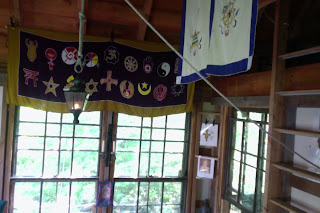 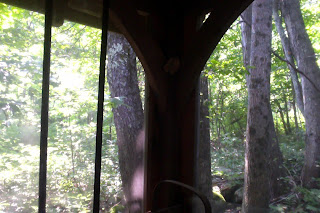 So, we are grateful for this man, for all the men and women who have touched and transmitted something of truth, love, peace, service, learning, and joy.

It is a practice we gladly practice: attending, another, alone, aware.

It is a matter of conjoining "yes" and "no."

IAHWY: I am here with you.

May each of us be and become: bewithed and bewithing!


O God, by whose grace your servant Bernard of Clairvaux, Kindled with the flame of your love, became a burning and a shining light in your Church: Grant that we also may be aflame with the spirit of love and discipline, and walk before you as children of light; through Jesus Christ our Lord, who lives and reigns with you, in the unity of the Holy Spirit, one God, now and for ever. (Ibid)

Posted by meetingbrook at 11:35 AM

The mathematician conceives the name of god with numbers.
I eat ice cream.
Moon nears full.
Posted by meetingbrook at 10:00 PM

republicans want to cut out the core


E. D. Hirsch, an advocate of the Common Core whose Core Knowledge Foundation distributes a widely used curriculum, warned in an interview that if the standards were not carefully implemented, schools could still end up emphasizing “mindless test prep” over substance.

“The Tea Party’s worried about the federal government,” he told me. “What they should be worried about is the education school professors and the so-called experts.”

But — as with that other demonic federal plot, Obamacare — the Republicans aren’t interested in making reform work. They just want it dead.

“Conservatives used to be in favor of holding students to high standards and an academic curriculum based on great works of Western civilization and the American republic,” two education scholars, Kathleen Porter-Magee and Sol Stern, wrote in National Review Online. “Aren’t they still?”

It's just a phase. Republicans will emerge into mature, caring, intelligent, useful contributors to the health and well-being of the citizenry and country.

(Glad I got that out while my mind is still alert! Back to my studies: Mexico is the capital of Italy; Clinton was president of Wyoming; The road to Heaven is paved with no intentions of helpful lobbyists; The old Soviet Union is currently hidden in a warehouse in the District of Columbia.

Posted by meetingbrook at 8:30 AM

as we are is 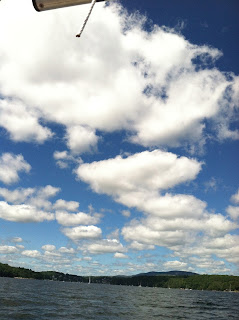 I write four phrases she is stitching: 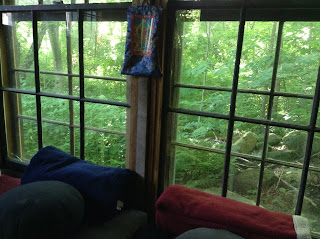 Ours is the ongoing, ever-present, origin revealing itself, moving through nothing we know, through the somethings we don't know, toward the "is" --  unconcealing, coming to be, from the nothing it was toward the nothing it already is.

As we are is!
Posted by meetingbrook at 2:58 PM

When God disappeared, this occurred

Of course there is the question: What is this? 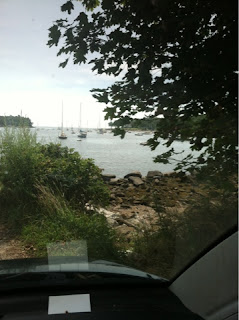 Suffering is from desiring; releasing is through realizing. 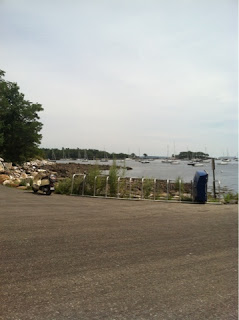 This is how we move. Into now. For now.
Posted by meetingbrook at 12:55 PM