With wings, I'll fly in the sky,
Like a fish, I'll dive into deep waters.
Only a fool reads his dream in a dream!
He doesn't know his body's in the furnace.
- Jungkwan Haean (b 1567)

You do things when you have to.

We'll wish upon a stone. We'll be blessed by it.

Between the stone and the ground there's nothing to be said by anyone not one or the other of them.

There's only the story told by the hearts of the falling stone and the receiving ground.

Creative blest. Take up thy rest.
Posted by meetingbrook at 11:32 PM

What is the Holy Spirit?

The mind of a Wayfarer is plain and direct, without artificiality. There is no rejection and no attachment, no deceptive wandering mind. At all times seeing and hearing are normal. There are no further details. One does not, furthermore, close the eyes or shut the ears; as long as feelings do not stick to things, that will do.
- Kuei-Shan (771-854)

If love is freedom and truth with compassion is love, then the Holy Spirit is what you are when no one other is home.

There is nothing in-between.

That nothing is the Holy Spirit.

One and the other have no separation.

This no separation is nothing in-between.

See this, see the Holy Spirit.
Pentecost approaches.
Posted by meetingbrook at 10:21 PM

Guilt is when we think we are responsible for things not being the way we think they should be.

The point is that things are always and only the way they are.

Dostoevsky once wrote: “If God did not exist, everything would be permitted”; and that, for existentialism, is the starting point. Everything is indeed permitted if God does not exist, and man is in consequence forlorn, for he cannot find anything to depend upon either within or outside himself. He discovers forthwith, that he is without excuse. For if indeed existence precedes essence, one will never be able to explain one’s action by reference to a given and specific human nature; in other words, there is no determinism – man is free, man is freedom. Nor, on the other hand, if God does not exist, are we provided with any values or commands that could legitimise our behaviour. Thus we have neither behind us, nor before us in a luminous realm of values, any means of justification or excuse. – We are left alone, without excuse. That is what I mean when I say that man is condemned to be free. Condemned, because he did not create himself, yet is nevertheless at liberty, and from the moment that he is thrown into this world he is responsible for everything he does.
(-- from Existentialism Is a Humanism, by Jean-Paul Sartre, 1946)

The antidote to guilt is awareness.

To relinquish judgment is to live without fear.

That would be freeing.

Posted by meetingbrook at 10:19 PM

The earth is already awake. It is man that sleeps.

Cut and drilled into, the blue cliff
Has lost its original beauty,
And frightens the birds,
And spills dirt into your eyes.
Nirvana has nothing to do with stones.
Enlightenment isn't limited to man.
Mountains, water, and earth
Are the Buddha's bodies.
- Jungkwan Haean (b 1567)

When man awakens, earth will take its long deserved rest.

Ground receives all patiently.
Posted by meetingbrook at 11:01 PM

It is the intention to live aware of the movement of God through the distortions, distractions, and diversions which occur to the contemplative in the midst of the matrix seething with seeming and dissimilation. That intention is the heart of the spiritual life.

That intention is what some have called 'faith' without knowing that their term 'faith' might not be faith at all, but control in costume and disguise.

There is only uncertainty. That's where faith resides undetected by policy, police, and authority in any guise.

Evening mountains veiled in somber mist,
One path entering the wooded hill:
The monk has gone off, locking his pine door.
From a bamboo pipe a lonely trickle of water flows.
- Ishikawa Jozan (1583-1672)

In the Benedictine tradition seven times a day there is a stopping to remember the intention to live in God even through chaos and even though creeds and critics say, "No, not here, somewhere else, look there, wherever that is."

As I ponder Merwin, a collaborating student sends me Eliot:

The knowledge imposes a pattern, and falsifies,
For the pattern is new in every moment

Not a moment too soon.

That was a way of putting it—not very satisfactory:
A periphrastic study in a worn-out poetical fashion,
Leaving one still with the intolerable wrestle
With words and meanings. The poetry does not matter.
It was not (to start again) what one had expected.
What was to be the value of the long looked forward to,
Long hoped for calm, the autumnal serenity
And the wisdom of age? Had they deceived us
Or deceived themselves, the quiet-voiced elders,
Bequeathing us merely a receipt for deceit?
The serenity only a deliberate hebetude,
The wisdom only the knowledge of dead secrets
Useless in the darkness into which they peered
Or from which they turned their eyes. There is, it seems to us,
At best, only a limited value
In the knowledge derived from experience.
The knowledge imposes a pattern, and falsifies,
For the pattern is new in every moment
And every moment is a new and shocking
Valuation of all we have been. We are only undeceived
Of that which, deceiving, could no longer harm.
(--from poem, East Coker, by T.S. Eliot)

New and shocking valuation. Every moment. We refuse God when we try to sit God in some place we can explain. 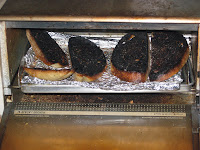 At the last minute a word is waiting
not heard that way before and not to be
repeated or ever be remembered
one that always had been a household word
used in speaking of the ordinary
everyday recurrences of living
not newly chosen or long considered
or a matter for comment afterward
who would ever have thought it was the one
saying itself from the beginning through
all its uses and circumstances to
utter at last that meaning of its own
for which it had long been the only word
though it seems now that any word would do
(Poem by W.S. Merwin)

I remember poet Richard Hugo's valediction: "Take my word, it's been fun."

He never said which word. But we took it, whichever it was.
And are grateful for it.

Do you think?
Posted by meetingbrook at 10:27 PM

Metaphors annoy some folks. They're so... associative.

His disciples said to Jesus, ‘Now you are speaking plainly and not using metaphors! Now we see that you know everything, and do not have to wait for questions to be put into words; because of this we believe that you came from God.’ (from John 16:29-33)

Heidegger said the past is before us. Not prior to, but stretching ahead of us. Funny thought, eh?

Jesus answered them:
‘Do you believe at last?
Listen; the time will come – in fact it has come already –
when you will be scattered,
each going his own way and leaving me alone. (Ibid)

Maybe Jesus wanted to be left alone. I like the idea he might have said, "Leave me alone!"
Scatter. Go your own way. Believe at. Last.

Once you've heard the word 'what-is' (German 'was ist') -- what is 'vorhanden' ('right there') -- there's no one to lead nor anyone to follow. Christ knew what he was... saying what is right before us.
Know one thing, know everything. Even as it comes to be before and beyond us.

Seek your own Buddha within.
No need to ask others about your father.
If you glimpse your mother's original face,
You'll know everything is Buddha.
- Jaewol Kyunghun (1542-1632) 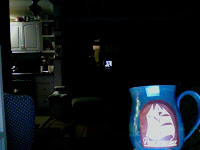 There's only one requirement: You have to be there to be here.

Be human. Dasein.
Here there.
Posted by meetingbrook at 11:31 PM

We are being spoken.
"It is not we who speak language, but language which speaks us." (George Steiner quoting Martin Heidegger)

Say what you will, we remain what God is speaking. 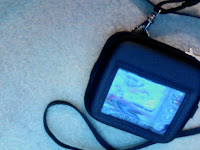 Every sound, beat, and arrhythmic fluttering skip.
Ellipses in a kindred loving sentence...
Posted by meetingbrook at 11:16 PM