There’s something waiting to be discovered in the traditional counsels/promises of the spiritual life:

Posted by meetingbrook at 11:24 PM

Posted by meetingbrook at 5:10 PM

you can no longer be deluded

What are we missing?

While we argue about abortion, Bankei tries to catch our attention.

Odd, this way of thinking.

The unborn Dharma disappeared in both Japan and China, and it has long since been forgotten. But now it has appeared in the world again.

Maybe a coffee and donut will help.

Here is where the heart is.

Here, you are, as you are, whole and entire.

With, or without, being born.

Posted by meetingbrook at 8:45 AM

As an altar boy

Exactly is unknown, an

Posted by meetingbrook at 8:34 AM

I’ve done nothing of any

Significance nor hope to

Posted by meetingbrook at 3:55 AM

do we speak being, or are we spoken by being

(These are words of carceral

Posted by meetingbrook at 11:13 PM

what business have i to do that

Come on — where is there to go? What am I supposed to wear?

What gibberish should I chant or pray or muffle into my sleeve?

A Vision of the Bodhisattvas

BY PHILIP WHALEN
They pass before me one by one riding on animals
"What are you waiting for," they want to know
Z—, young as he is (& mad into the bargain) tells me
"Some day you'll drop everything & become a rishi, you know."
I know
The forest is there, I've lived in it
More certainly than this town? Irrelevant—
What am I waiting for?
A change in customs that will take 1000 years to come about?
Who's to make the change but me?
"Returning again and again," Amida says
Why's that dream so necessary? walking out of whatever house alone
Nothing but the clothes on my back, money or no
Down the road to the next place the highway leading to the
mountains
From which I absolutely must come back
What business have I to do that?
I know the world and I love it too much and it
Is not the one I'd find outside this door.

Just as I suspected — there’s no one there.

Nothing other than this.

Posted by meetingbrook at 7:34 PM

god, we are condemned to live with such men

What an absurd man

Afraid to admit he lost —

It is not unkind to tell

The truth about idiots

Posted by meetingbrook at 5:15 PM

no dishes in sink
no bread in toaster, no juice
in glass — ausculter
Posted by meetingbrook at 4:59 AM

this and thus itself

Some say it is human nature to want for yourself that which belongs to another.

It seems, rather, to be belief and behavior better characterized as not-yet-human.

For me, today, to be human is to let another be another, and to experience and accept another as no-other.

Whatever name put on it, to be human in its most authentic manifestation is to become a transparent presence personifying aseity, haecceity, and tathātā.

Itself, this, and thus — a humanity recognizing the integrity, individuality, and inherent inchoate nature of authentic existence becoming and being itself without objectification without instrumentality without violation.

Some might call such a way of being a way of love.

However uncomfortable the use of the words ‘love,’ ‘human,’ or ‘god’ might be, it is a profound trust and hope that these three expressions of earthly existence just might be made manifest in our everyday experience and ordinary thinking. Aseity (from Latin ā "from" and sē "self", plus -ity) is the property by which a being exists of and from itself.[1] It refers to the Christian belief that God does not depend on any cause other than himself for his existence, realization, or end, and has within himself his own reason of existence. This represents God as absolutely independent and self-existent by nature. Many Jewish and Muslim theologians have also believed God to be independent in this way.[1] This quality of independence and self-existence has been affirmed under various names by theologians going back to antiquity, though the use of the word 'aseity' began only in the Middle Ages.[1] https://en.wikipedia.org/wiki/Aseity

Haecceity (/hɛkˈsiːɪti, hiːk-/; from the Latin haecceitas, which translates as "thisness") is a term from medieval scholastic philosophy, first coined by followers of Duns Scotus to denote a concept that he seems to have originated: the irreducible determination of a thing that makes it this particular thing. Haecceity is a person's or object's thisness, the individualising difference between the concept "a man" and the concept "Socrates" (i.e., a specific person).[1] In modern philosophy of physics, it is sometimes referred to as primitive thisness.[2]

Haecceity is a Latin neologism formed as an abstract noun derived from the demonstrative pronoun "haec(ce)", meaning "this (very)" (feminine singular) or "these (very)" (feminine or neuter plural). It is apparently formed on the model of another (much older) neologism, viz. "qui(d)ditas" ("whatness"), which is a calque of Aristotle's Greek to ti esti (τὸ τί ἐστι)[3] or "the what (it) is."

Tathātā (/ˌtætəˈtɑː/; Sanskrit romanised: tathātā; Pali romanised: tathatā)is a Buddhist term variously translated as "thusness" or "suchness," referring to the nature of reality free from conceptualisation elaborations and the subject–object distinction.[1] It is a central concept in Mahayana Buddhism,[2][3] having a particular significance in Chan Buddhism as well. The synonym dharmatā is also often used.[citation needed]

Posted by meetingbrook at 8:38 AM

let it go, let them go

After watching film on human trafficking, this thought:

There is depravity in believing and acting on the belief that things and persons belong to you.

dove vivi è come vivi* — being through time that which is, in itself 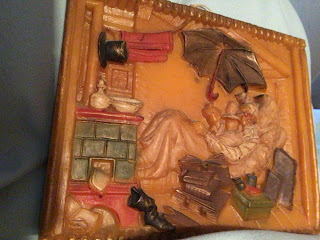 *Where you live is how you live. (Translated from Italian)

Love of the place.

Fiddle music from Celtic Colours in Cape Breton parsing the grammar of morning at Ragged and Bald Mountains in Camden Maine of a Tuesday.

The fact of it!

Here, from the book “The Fate of Place” by Edward S. Casey, Chapter Title: Proceeding to Place by Indirection: Heidegger, this:

I do not want to be absolutely dogmatic by asserting that one cannot conceive Being except on the basis of time. Perhaps someday a new possibility will be discovered.

The bare space is still veiled over. Space has been split up into places.

Unless we go back to the world, space cannot be conceived.

What, on Freud's view, dreams provide for an understanding of the uncon- scious mind-a via regia, a "royal road"-the body has provided for place, which by the end of the nineteenth century had come to be as repressed as the libidinal contents of the unconscious mind. Nevertheless, promising and productive as bodily inroads into place have shown themselves to be, they do not exhaust the modes of effective reentry to the place-world. In this chapter we shall consider the contributions of someone who neglected the role of the body in implacement but who managed to find other means of access to place as a subject of renewed philosophical importance. Indeed, it could even be claimed that it was precisely by his deliberate refusal to invoke the body- along with consciousness, its incongruent counterpart-that Heidegger made his own way to place.1 Heidegger's way back to place is a middle way, a via media between body and mind, both of which are set aside in order to concen- trate on what happens between them. In exploring this open between-this between of the Open-Heidegger was drawn into detours that, despite their digressive character, allowed him to glimpse aspects of place overlooked by other thinkers, ancient as well as modern. This is so in spite of the fact that these same detours are described in a vocabulary that is highly idiosyncratic and that, at least at first glance, seems to make little connection with previous descriptions of place.

Heidegger came to a full acknowledgment of the power of place only belat- edly. In earlier phases of his thought, place was important not for its own sake but because of its usefulness in such disparate contexts as the work world, the work of art, and politics. Even when Heidegger abandoned an instrumental interpretation of place in his middle period, he still did not single out place as such. Yet in later writings place (along with region and other related terms) emerged as an increasing preoccupation. Heidegger himself underlined this slow but decisive augmentation of place in his evolving thought when, in a seminar at Le Thor in 1969, he maintained that his thinking had traversed three periods, each with its own leading theme: Meaning, Truth, and Place.

Heidegger gets back into place, then, not as "the first of all things" to be considered (as certain ancient thinkers had assumed), or in reactive flight be- fore infinite space (a flight taken by many modern thinkers), but by indirec- tion: by traveling through diverse "forest paths" (Holzwege), as he liked to put it. To begin with, he returns to place not through but despite the body's involvement in placiality: as if place could be reached around and outside the body itself. Still more tellingly, he returns to place despite his own obsession with inaugurating a postmetaphysical era in philosophy-an era in which one might well imagine place to be a dispensable item, given its preeminent posi- tion in classical metaphysical thinking from Plato through Philoponus, and continuing into the Middle Ages. Yet just as place emerges in the Cartesian abyss between consciousness and body, so it rises, Phoenixlike, from the ashes of metaphysical thought as deconstructed by Heidegger. Thanks to such fea- tures as gathering and nearness, place becomes for him the very scene of Being's disclosure and of the openness of the Open in which truth is uncon- cealed. In the end, place figures as the setting for the postmetaphysical event of Appropriation (Ereignis).

Is this good news?

Is this the heart of Buddhist/Christian thinking?

Not taking anything from anyone — being through time that which is, in itself,

That which draws us into the place we are.

Posted by meetingbrook at 8:00 AM

Posted by meetingbrook at 10:27 PM

Sharing a Mountain Hut with a Cloud

A lonely hut on the mountain-peak towering above a thousand others; One half is occupied by an old monk and the other by a cloud:

Last night it was stormy and the cloud was blown away;

After all a cloud could not equal the old man's quiet way.

The old man probably is the cloud.

Do you see him anywhere?

Posted by meetingbrook at 4:23 PM

you hold it together Looking through
This
What are you
Seeing?
Posted by meetingbrook at 8:07 AM

I have fallen off

Release of leaves onto ground

Where each step is one with earth

Our practice is clear

Everything in and out be-

longs with this order

Bow if you wish, walk

sit, chant or be silent, you

are hereby now and

forever one with one in

the zendo as the sangha

Posted by meetingbrook at 7:57 AM