no worse, but different

Looking this way and that none

Posted by meetingbrook at 4:03 PM

nothing left to give

Posted by meetingbrook at 1:34 PM

out of darkness leading to dim light

where nothing becomes something

Posted by meetingbrook at 1:29 PM

"It's hard to know where to start

if you don't start with the truth."

that loveless things occur, but

Posted by meetingbrook at 11:17 AM

ya na (you are not) alone

Posted by meetingbrook at 5:19 AM

Who do you serve, who

Posted by meetingbrook at 10:27 PM

When in the mountains,

I will watch the mountains,

I will listen to the rain,

kvetching the contours of notoreity

Posted by meetingbrook at 6:30 AM

ask me, I prefer

propel to excel -- to move through

not surpass, but thrive

Posted by meetingbrook at 3:14 PM

and you don’t know me

Comes now to our ears

Posted by meetingbrook at 4:44 AM

cough from down hall

by road at house across from

Posted by meetingbrook at 4:11 AM

This is what I recall.

of the house where I was born:

Posted by meetingbrook at 3:31 PM

as simple as you can

round bread from Whole Foods

Posted by meetingbrook at 2:47 PM

The eternal feminine and the wise old man. Jung looked into these two. The reality of the psyche. An apriori fact of nature, an objective phenomenon.

Each night a visit. Every dream an orientation. An ordinary psychosis disenchanting the solid belief two plus two is four.

Mandalas, found all over the world, primordial images of wholeness or totality, the Jungian investigation.

This Wednesday, in mid-coast Maine, between mountains, my psyche drifts amnesiac between two worlds, (or is it three?) completely uncertain as to who has lived my life up to now. 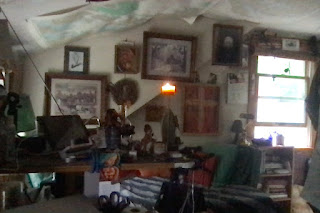 Bowing to all residue of personage who've aggregated and aggravagated the sluice passage I and every other have taken enroute here and elsewhere.

An aesthetic collating the interdisciplinary obvious. All these years later. Still wondering where any of us belong.

My brothers in prison. We meet, sit, and converse. We consider what there is to learn, how learning is teaching itself. The one revolutionary emancipation, becoming free, even in the most restrictive spaces, even between cranial confines, between sternum spine enclosure.

Our elder in Carmel encourages that I attend the shakuhachi player's 80th birthday celebration. I tell her only if I drive the 359 miles to pick her up and bring her back the 329 miles to the gathering and then take the 718 mile roundtrip returning her to her anchorite homestead.

I will have to write a haiku. I will not have been not at the gathering, only not as one might appear.

I suspect, if there is a continuity of life beyond this material/physical existence, I will have to devise a series of mythopoetic contrivances to obfuscate the seemingness of anti-phenomenological semblance while honoring the integrity of affective fondness even in absentia.

Despair is as good as repair.

One could argue, less expensive.

Posted by meetingbrook at 12:43 PM

The sound of words encircling archetypal foundations of thought from which all symbols form and fall and feel their way into thin air which fills our fleeting awareness with facts and falderal and fanciful fennels of  recollection.

Such as the dream I wake from tonight. The cast of characters and unopened package of pipe tobacco in jacket pocket along with honey soft cough drops.

“They lived and laughed and loved and left.”

The sound of it.

Posted by meetingbrook at 3:09 AM

Not easy, being fooled.

"Treat them nice in a world that just spit on you" (--Manti T'eo, in documentary, Untold: The Girlfriend Who Didn't Exist" Netflix)

Coming through the other end, the difficult bow at end, this inexplicable play.

Posted by meetingbrook at 4:09 PM

why not be it

Through and through a bullet clean

And clear not killing

Posted by meetingbrook at 9:05 PM

Heidegger was tricking us.

He said we are still not thinking.

And we conclude that he was saying we must begin to think.

He let us mull that, and we concluded an erroneous conclusion.

Here's what I think: To think is to unthink.

To unthink is to be still. (He said:

To unthink is to be

To think is to disappear into somewhere undiscoverable.

If you embrace zen, you hold nothing

and that nothing is (paradoxically) intimate presence.

Intimate presence has no outside no inside --

Only the energy* moving through the physical/spiritual universe

Now, what if we think/unthink that?

b : the capacity of acting or being active  intellectual energyc : a usually positive spiritual force  the energy flowing through all people

3 : a fundamental entity of nature that is transferred between parts of a system in the production of physical change within the system and usually regarded as the capacity for doing work

4 : usable power (such as heat or electricity)  also  : the resources for producing such power

Posted by meetingbrook at 1:58 PM