keeping up with crazy

We don’t have a story. The narrative is unconvincing. The yearly rituals of death and resurrection are again staged.

The hands of time seem out of touch.

Altering our stupidity into lucrative payday is the new crack the new heroin the new
methamphetamine the new radio and right wing cable tv.

It’s hard to keep up with crazy.

The crime of deterring

It is what prison takes away.

Sentencing life to missing it.
Posted by meetingbrook at 11:33 PM

I picked the squirrel up by the tail. No blood. Just there in road on back. Balancing bicycle heavy with groceries, I walked to side of road, placed it on spate of earth, vigiled a brief while, then rolled bicycle up rest of hill,


Even the smallest glimpse of freedom heightens our awareness of the pain we have created by our ego-fixation. Seeing the contrast is what inspires us to go forward on the path. In particular, each time we sit on the cushion and meditate, we relax and let go a little bit more. The notion we’ve held onto—that if we don’t keep up our ego-momentum something bad is going to happen—dissolves bit by bit. (—from Judy Lief, “Letting Go,” in Tricycle Magazine)

We are cor-respondence. We are com-munion. We are con-versation. Hence, equality is what belongs to us.


She asked us to engage in several exercises -”keep going in a straight line until you have to turn” – each an invitation to spontaneous interaction, each with a natural lifespan, 5 minutes, 15 minutes, then the energy turned formulaic or repetitive and died away.  She said that’s how it is with all energy, all relationships, that the energy comes and goes and comes and goes like the tide.  She implied that we’re happier when we recognize this pattern, stop fighting it, and just let it happen.  (--from Peter Cunningham blog; dancer Martha Myers words) http://petercunninghamphotography.com

We’ve had it wrong. We thought it was objects. Others as objects. It’s not.

What it is, if we can say anything at all, is coming to the clearing where significance is shared by all who find their way there.


SZ: Would you say that your father was the most important person in your life?       ED: No. (Laughs) Right now I’m talking to you, so you are. Congratulations! (--Michel Engu Dobbs interview, Sweeping Zen, Feb. 21, 2012) http://sweepingzen.com/michel-engu-dobbs-interview/

Posted by meetingbrook at 8:57 PM

Rain
All over
And into
April 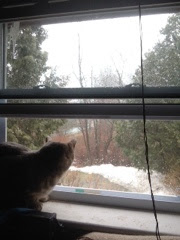 Posted by meetingbrook at 9:43 AM


At practice last evening, which dream do we consider more real -- the one while we sleep? or, the one when awake?

Chaos and doubt? Or, order and certainty?

Peter Matthiessen’s death drew our observations. So too did the words of the Inner Chapters by Chuang Tzu.

This morning I open doors and windows of yurt, zendo, and book shed/retreat. I burn incense and light candle in memory of Cynthia in zendo at altar cabinet and Pacific coast shell in memory of her son Danny she gave to us. Gassho!

I light candle and burn incense in book shed for Jonathan’s mother on her birthday.
L’chaim.

is the same age today

each a Good day

What we call “self” is not clenched double-fist solid entity. Rather, self is open-fingered falling through exchange of sensations, memories, thoughts, and awareness engaging a flowing grace and sweet dignity in communion with circumstance and surroundings.

To know yourself is to let yourself go into the unconcealing present situation with integrity and humility.


Free passion is radiation without a radiator, a fluid, pervasive warmth that flows effortlessly. It is not destructive because it is a balanced state of being and highly intelligent. Self-consciousness inhibits this intelligent, balanced state of being. By opening, by dropping our self-conscious grasping, we see not only the surface of an object, but we see the whole way through. We appreciate not in terms of sensational qualities alone, but we see in terms of whole qualities, which are pure gold. 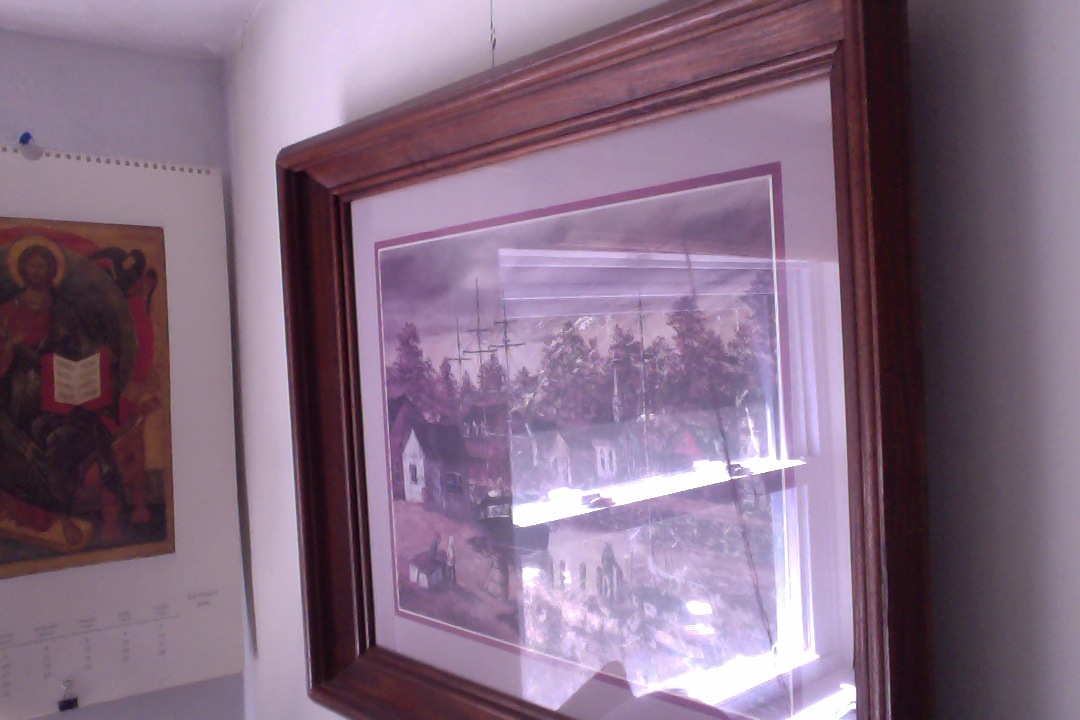 They are laughing at the fact they are old and growing infirm. Someone else’s name arises. “She’s not the center of the universe,” he says to woman reading Parkinson’s material. Climbing stairs he hopes she is still taking the amusement of their banter.

He only means the interpretation someone gives for something is merely the interpretative opinion their mind fashions out of the patterns and habits accumulated over long stretch of time.

He means the guess anyone has about the world they visit is as good as the 10,000 guesses they could have made.

He is speaking about anyone who seems to present themselves with the calling card that they are the center of the universe. (Which, in a different context, they actually are.)

He means he knows he’s full of baloney. He’s unsure the reading woman has the same opinion about herself. And leaves it there.

Mountains on all sides

Rivers looped around it

There's no trail to my hut.

When the dragon elephant approaches

A path opens all by itself

In the hour of soaring talk

Neither has to think of meeting

The other half way

Though all of you keep

Wandering into yes and no.

The physicist claims she has no particular interest in the cultural conditioning the vast majority of us cling to -- what to wear, what not to wear in the tidy expectations of societal norms. The universe, the multi-verse is so enormous, complicated, and diverse -- and we are so small, odd, and narrow. What, I wonder, does it matter if we wear a jacket to dinner, hat to church, shoes to business meeting, use salad fork with lasagna, believe in Jesus or tree-spirits, vote republican, stifle cuss words in mixed company, or even spend our life listening to spondee and dactyl of afternoon trees dancing with sunny breeze during casual walk?

It, the implication resounds, doesn’t matter. Still, there are realities we have to observe.

A MADMAN DREAMS OF TURING MACHINES

A Madman Dreams of Turing Machines bridges fiction and nonfiction to tell a strange if true story of coded secrets, psychotic delusions, mathematical truth, and lies. This story of greatness and weakness, of genius and hallucination, is based on the parallel lives of Kurt Gödel, the greatest logician of many centuries, and Alan Turing, the extraordinary code breaker during World War II. Taken together their work proved that truth is elusive, that knowledge has limits, that machines could think. Yet Gödel believed in transmigration of the soul and Turing concluded that we were soulless biological machines. And their suicides were complementary: Gödel, delusional and paranoid, starved himself to death fearing his food was poisoned. Turing ate a poison apple, driven to suicide after being arrested and convicted of homosexual activities. These two men were devoted to truth of the highest abstract nature, yet were unable to grasp the mundane truths of their own lives. Through it all, the narrator wonders, along with these two odd heroes, if any of us can ever really grasp the truth.

(-- from description of her novel by Janna Levin on her website)  http://www.jannalevin.com/science.html

If we are working with “nothing” -- how is the mind to remain sane?

If we are working with “everything” -- how are we able to accomplish anything?

If we are interested in “thinking/acting” -- is there any better way aside from stillness and silence?

A Way of Working

Once, Chuang Tzu tells us, there was a master craftsman who made such beautiful things out of wood the the King himself demanded to know the secret of his art.

“Your Highness,” said the carpenter, “there is no secret; but there is something.  This is how I begin.  When I am about to make a table, I first collect my energies and bring my mind to absolute quietness.  I become oblivious of any reward to be gained or any fame to be acquired.  When I am free from the influences of all such outer considerations, I can listen to the inner voice which tells me clearly what I have to do.  When my skill is thus concentrated, I take up my ax; I make sure that it is perfectly sharp, that it fits my hand and swings with my arm.  Then I enter the forest.  I look for the right tree:  the tree that is waiting to become my table.  And when I find it, I ask: ‘what have I for you, what have you for me?’  Then I cut down the tree and set to work.  I remember how my masters taught me to bring my skill and my thought into relation with the natural qualities of the wood.”

The King said, “When the table is finished, it has a magical effect upon me.  I cannot treat it as I would any other table.  What is the nature of this magic?”

“Your Majesty,” said the carpenter, “what you call magic comes only from what I have already told you.” 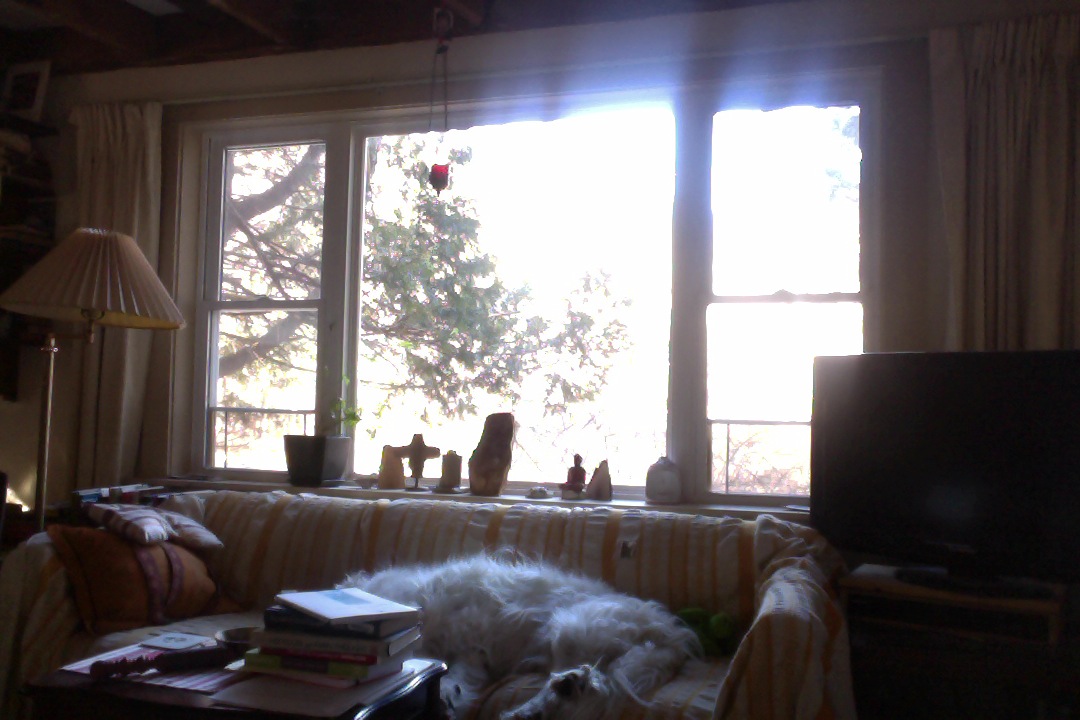 Behind stack of books, white dog sleeps with cedar tree and Bald Mountain drenched in April sunlight -- behind him -- glare, the Buddha, crucified Christ, piece of split wood leaning against window.

The universe might be unfathomable -- but in my room and backyard -- it is there for my unfathoming eyes.

Sound of bells in afternoon wind.
Posted by meetingbrook at 4:30 PM