Complain about things needing better care until care is given.

Finish the chocolate cake.
Posted by meetingbrook at 11:52 PM

Chagrin at all of it. The bombs. The deaths. The maiming. The excess. The shut-downs. The paralysis. The massive force. The soon-to-develop alternate narratives that will sow confusion and suspicion.

Beyond mere relief at closure of the drama, sheer chagrin at the spectacle of sur le dessus!

Are all the children insane?

"There's danger at the edge of town," sang Jim Morrison.

We don't see each other any more.

Pray, if you can see your self clear,  for us!
Posted by meetingbrook at 10:35 PM 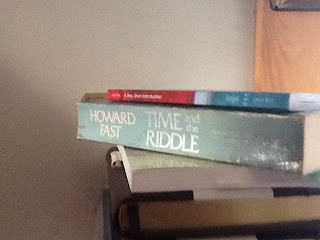 Epilogue:  "What is involved is, in short, a return to the original time, the therapeutic purpose of which is to begin life once again, a symbolic rebirth."
(Mircea Eliade, in The Sacred and the Profane, p.82)
Posted by meetingbrook at 7:28 AM

Ancient Greek conclusion of drama could be contemporary Boston.

The time is past for words; earth quakes
Sensibly: hark! pent thunder rakes
The depths, with bellowing din
Of echoes rolling ever nigher:
Lightnings shake out their locks of fire;
The dust cones dance and spin;
The skipping winds, as if possessed
By faction-north, south, east and west,
Puff at each other; sea
And sky are shook together: Lo
The swing and fury of the blow
Wherewith Zeus smiteth me
Sweepeth apace, and, visibly,
To strike my heart with fear. See, see,
Earth, awful Mother! Air,
That shedd'st from the revolving sky
On all the light they see thee by,
What bitter wrongs I bear!

PROMETHEUS
[1080] Indeed, now it has passed from word to deed—the earth rocks, the echoing thunder-peal from the depths rolls roaring past me; the fiery wreathed lightning-flashes flare forth, and whirlwinds toss the swirling dust; the blasts of all the winds leap forth and set in hostile array their embattled strife; the sky is confounded with the deep. Behold, this stormy turmoil advances against me visibly, sent by Zeus to frighten me. O holy mother mine, O you firmament that revolves the common light of all, you see the wrongs I suffer!

[Amid thunder and lightning Prometheus vanishes from sight; and with him disappear the daughters of Oceanus.]

We are translating human experience into the ancient now.

waiting for useful repair to retrieve and rebuild with restrained creativity 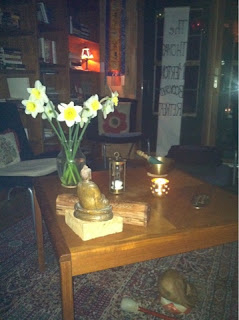 A solitude of sorrow for wholeness to be retrieved. 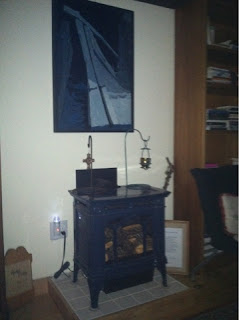 "An illustration of the emerging world picture appears in a remarkable, indeed exciting, study of the life and work of Erwin Schrodinger, Nobel Prize winner for his pioneering efforts in the field of wave mechanics. The philosophical side of his genius stands out in this book by Walter Moore (Schrodinger, Life and Thought, 1989). According to him, Schrodinger claimed that

Schrodinger felt that the claim made by his colleagues that his concept of the "real world" and consciousness arises merely out of his own consciousness, was a "false conclusion," and if this interpretation were widely accepted it would let loose "a pandemonium of logical consequences" (p. 464). One would be the "fruitless quest for the place where mind acts on matter or vice-versa." In this connection, Schrodinger quoted Carl Jung:

"All science is a function of the soul, in which all knowledge is rooted. The soul is the greatest of all cosmic wonders, it is the conditio sine qua non of the world as an object. It is remarkable that Western mankind, with few exceptions, has accorded so little value to this fact. The flood of external objects of cognizance has made the subject of all cognizance withdraw into the background, and often into apparent nonexistence." (-- 1946 Eranos Meeting, Switzerland, quoted in Moore, p. 464)

Professor Moore adds that "Schrodinger agrees with Jung that science must be made over again, but great care will be needed in changing foundations that have endured for at least two thousand years" (ibid.)"
http://www.theosophy-nw.org/theosnw/science/sc-imo6.htm 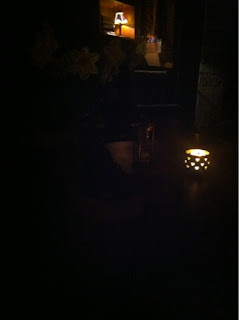 What withdraws from ego and fear is being itself displaced by terror. 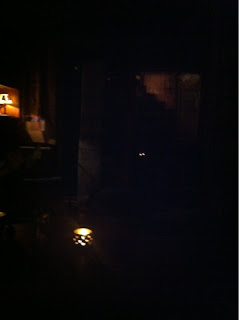 There is a watchful gaze that knows the watcher is himself capable of killing and hatred. And with that awareness, carefully scrutinized, comes the realization it need no longer honor the terror of the ego. Which, like pocketknife folded into leather case on belt, there it remains unopened, not plunging into greed, desire, or revenge, but waiting for useful repair to retrieve and rebuild with restrained creativity the wounded broken pieces of human body, spirit, mind.

I know what I am.

Now, we, all of us, are finally free to attend to the genesis wording forwarding the omnipresent origin of the universe.

Let us be told -- again -- there is no longer a need for ego's destruction.

Let it live with love and be transformed!
Posted by meetingbrook at 3:18 PM 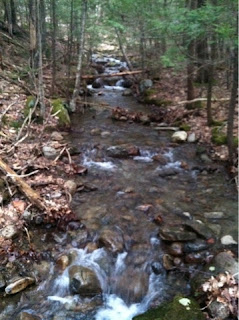 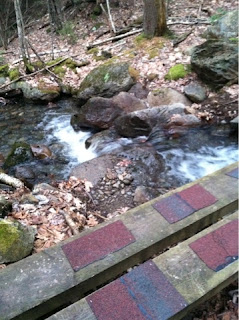 In Maine, up by brook,
water comes down mountain, passes

under plank-bridge, continues
toward yurt, around bend.

I pray with water
for those in Boston,

those killed, those injured,
all frightened. 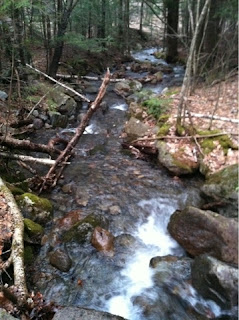 Posted by meetingbrook at 8:27 PM

It happens slowly. Words of Yeats poem and Achebe novel and Pema Chodron adds 'when' before "things fall apart' -- the effective deterioration and affective destabilization run in silent depth through a very large emptiness through which not anything appears as it is.

The symbols have had what they carried fall weighted away.


"It is customary to blame secular science and anti-religious philosophy for the eclipse of religion in modern society. It would be more honest to blame religion for its own defeats. Religion declined not because it was refuted, but because it became irrelevant, dull, oppressive, insipid. When faith is completely replaced by creed, worship by discipline, love by habit, when the crisis of today is ignored because of the splendor of the past, when faith becomes an heirloom rather than a living fountain, when religion speaks only in the name of authority rather than with the voice of compassion, its message becomes meaningless."
--Abraham Joshua Heschel, in God in Search of Man: A Philosophy of Judaism

There's a debate going on in America. Some want to preserve their ability to shoot and kill, animals or 'bad guys.' The other side wishes guns and ammunition to be more circumspectly portioned out. Parents and families of slaughtered children feel powerfully about this. Those who hand out money, profiting from sales and receipts, feel their economic rights strongly endangered. Another group, those who feel they'd like to have enough guns and ammo to countervail an arrogant and threatening government when the time comes -- these are the most serious.

I own only the ability to cry, to bleed, to suffer pain, and to die. I stockpile these vulnerabilities in places anyone could find, anyone could manipulate, anyone could have if they want them.

Perhaps this is what both Buddha and Jesus meant when they presented themselves strangely earlier in our history.

Isaiah wrote about the Suffering Servant. Jesus, it is said, became the words of Isaiah and the very Word through which God could be heard in human language. The mystery of his suffering and death remains iconic in our consciousness. The lore of resurrection remains impossible for us to sort through and fathom. Suffering in this pageant of pathos cannot be taken away -- only lived through. (For the religious zealots among us: There's no reason for self-imposition of suffering -- that only points out profound mistrust of life to provide it to you.) You are no holier if you harm and mutilate or suicide yourself. It does not please or serve 'God' to harm self or others in order to better things. Thank you for the thought, but our intentions to short-cut or improve our lot is self-serving masochism or sadism best left at a therapist's office.

An evolutionary biologist who's not religious recently said to me that he thinks scientists need to recover the word spirituality. He said we talk about it. We talk about the spirit of inquiry. So I just want to ask you, you know, very personally. Like, you know, if you did use that phrase, the spirituality of scientists, what would that mean for you?

Dr. Krauss: I think you've captured some of it. If I had to use the term, I'd use awe in the wonder of nature and the realization that spirituality isn't having the answers before you ask the questions. And that's the main thing: that real spirituality comes from asking the questions and opening your mind to what the answers might be.

(--from, Transcript for Our Origins and the Weight of Space with Lawrence Krauss, April 11, 2013, with Krista Tippett: On Being. "The physicist Lawrence Krauss says that one of the values of science is to make us uncomfortable.")

There's a lot we don't know, can't see,  or hear, and have no idea of wherefore or whither or whence.
The universe, you'll be happy to know, is as dark as our consciousness. 'Dark' as in unknown. Not 'dark' as in malevolent or cruel. We don't understand suffering and we don't understand dark emptiness. To approach one or the other you have to score a union card that says: 'Admit One Mystic.'

Krauss was asked about dark matter:


Audience Participant: Thank you. Can you explain to us what dark energy and dark matter are and why — excuse me, how — it's important to us?

Dr. Krauss: Well, they are almost everything in the universe. Let me make it quite clear that you are indeed far more insignificant than you ever imagined. [Laughter]

Dr. Krauss: Not just you, but you, not me, but all of you, but, uh, no, all of us, because we have learned that, if you'd look at everything we could see, the beauty of the night sky here and it's nice and dark at night. I was looking last night at the stars.

The beauty of the night sky and everything we see is just a bit of cosmic pollution in a universe full of dark matter and dark energy. Ninety-nine percent of the universe, 30 percent of the universe roughly is this dark matter, which is made, we're reasonably convinced, of some new type of elementary particle that doesn't exist here on earth. Seventy percent is dark energy, which is the energy of nothing. [Ibid] 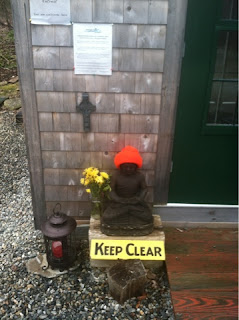 Lately, my attention turns to aesthetics. It was a seeming throwaway sentence by Peter Singer ending his introduction the the section "Animals and the Environment" in The Moral of The Story, An Anthology of Ethics through Literature (Edited by Peter Singer and Renata Singer, c.2005). He wrote: "We may have reached the point at which aesthetic judgment takes over from ethical argument."


In all, Kant’s theory of pure beauty had four aspects: 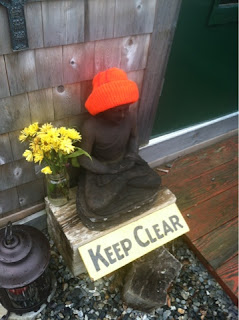 There's a lot to sit with.

and see.
Posted by meetingbrook at 6:56 AM