What have I? Not learned: yet

The insight was that the community is the great teacher. This includes all sentient beings, the whole of the cosmos, all that is, known and unknown. A pretty interesting zen master, guru, and mystic presence to have as teacher, eh?


lair   [lair]
noun
1. a den or resting place of a wild animal: The cougar retired to its lair.
2. a secluded or hidden place, especially a secret retreat or base of operations; a hideout or hideaway: a pirate's lair.
3. British . a place in which to lie or rest; a bed.
verb (used with object)
4. to place in a lair.
5. to serve as a lair for.
(--from Dictionary.com)

What is in me? What is in the world? What's the difference?

What have I not learned yet?


Totality is everything that is happening in your own body/mind and everything that is not happening in your body/mind. Embodiment is the only thing that we can find. That's why trying to fix the universe by what we know is ludicrous, because what we don't know is constantly folding into the known. This is what manifestation is. We become enamored with the manifestation, forgetting that it is already gone and what is next, which is the unknown, is now expressing. All we can see is the known -- a ghost image that has nothing to do with what is next.
So in coming to the end of the spiritual search, we actually come to the beginning of the exploration of consciousness. This is not a path of looking or finding; it is not negating the thought-process or changing anything. It is the exploration of the manifestation and embodiment of totality, which is expressing itself in what is next after now, in my body, in my life, in my relationship, in all the forms and expressions that are apparent and all the forms and expressions that are not.
(p.42, in What's Next After Now, Post-Spirituality and the Creative Life, by Steven Harrison, c.2005)

The Tibetan prayer flags are sheer against barn siding.

Every moment of experience is contingent on a vast complex of myriad conditions. Nothing exists in and of itself as 'this' or 'that,' 'self' or 'other.' Everything is what it is only in relation to what it is not.
(-from, Stephen Batchelor, "Nagarjuna's Verses from the Center" -- Tricycle Magazine)

I don't think I am afraid of what is next. 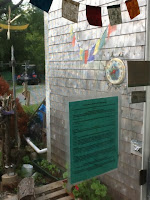 the eyes see nothing; doing

Some think there's too much said about enlightenment. I agree. Except that it's like commenting on the weather. If you don't say anything about the weather, there's still weather.


Enlightenment does not divide you, just as the moon does not break the water. You cannot hinder enlightenment, just as a drop of water does not hinder the moon in the sky. The depth of the drop is the height of the moon. Each reflection, however long or short it's duration, manifests the vastness of the dewdrop, and realizes the limitlessness of the moonlight in the sky.
- Dogen (1200-1253)

I read slowly. And if I like a novel, slower still. These are these lines referring to protagonist, Mohammad Khan, architect:


Critics and historians credited him with helping to shift the aesthetic of the Middle East. "Even in a mosque you should feel yourself in a garden," he had told one interviewer. "Nothing between you and God."
(--p.287 of novel,The Submission, by Amy Waldman)

It asks the question: Do I want, really, to realize God?

Then again: Will "nothing" engulf and consume me?

If I submit, what will be left to be aware I have made submission?
Posted by meetingbrook at 10:51 PM

There are days when something striking and poignant arises. Eye and ear are grateful recipients.


Unpacking and shelving two dozen boxes of books from the house library of Saskia's mom and dad remind me I should have paid more attention the two years of German studied the better part of a half century ago.


I did, however, memorize the Greek alphabet in what seemed like quick dispatch. I also set a good pick for Bob and Jon when the fast break failed to happen.


One of the pieces out of the haul box at end of day was KOVÁCS MARGIT MÚZEUM, SZENTENDRE. This museum booklet, with its photographs of figurines and sculptures immediately charmed. The pages gave way to decades of tiredness and separated with each turning. 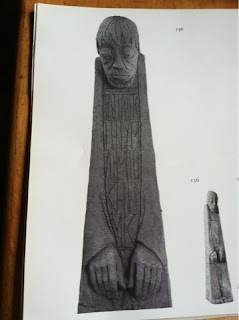 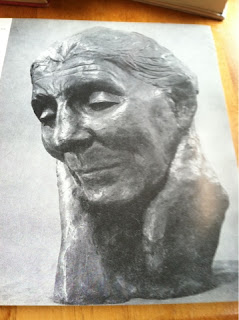 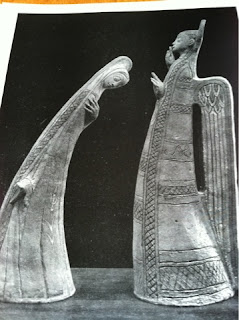 
The curve of surprise! The pathos of visage! The deflation of loss!


This Gyűjtemény (Hungarian, for 'Collection') was housed in the Pest County Museums Directorate in Szentendre, where in 1972 she donated the majority of her work. Margit Kovács was born in Győr, Hungary on 30 November 1902 and died in Budapest on 4 June 1977. It was on the 25th anniversary of her death that I found her work. Dare call it coincidence! Did Saskia's mother and father visit the museum? Of course, the notation over "Ex Libris, Erica Huising" in Will's handwriting says "Szentendre, 1979."

While looking at these photographs I listen to "Wo gehest du hin?" by J.S. Bach (BMV166, 8fm) performed by the Amsterdam Baroque Orchestre and Choir, Ton Koopman, soloist.

Beckoning.
Posted by meetingbrook at 6:33 PM

Mu; If the sangha is the next great teacher


What you have to do is listen, accept, internalize, and respond.

Until the cows come home.
Posted by meetingbrook at 7:34 AM

Metaphor tells us; many stories


Dewdrop,
The gaudy beauty of this world
Has no attraction for me;
My closest friends are
Mountains and rivers,
Clouds swallow up my shadow
As I walk along,
When I sit on cliffs,
Birds soar overhead.
Wearing snowy straw sandals,
I visit cold villages.
Go as deep as you can into life,
And you will be able to let go
Of even blossoms.
- Ryokan (1758-1831)

Mutatis mutandis, things being changed that have to be changed -- human heart, head, and hand crave harmony.

Go as deep into life as you can.

It is all story.
Posted by meetingbrook at 3:38 AM

Easy is as easy does

The hardest lesson is coming to terms with dark in light and light in dark. It's not one or the other. Both are entwined.


When the mind's as is,
Circumstances also are as is.
There's no real and also no unreal.
Giving no heed to existence,
You're neither saint nor sage, just
An ordinary person who has settled his affairs.
Easy, so easy…
- Layman P'ang (740-808)

Where everything is in the same place, it's not a matter of amputation. It's a matter of navigation. How find your way to where you want to go and not slam into the hazards on left and right? 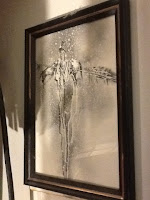 Settle your affairs!
Posted by meetingbrook at 10:26 PM