Really? How can you live without hope?

What do you rely on?

Not much. I’m watchful.

Posted by meetingbrook at 8:00 PM

From France, sicut erat in

In its final month

the open country of what transcends speech

In this time of COVID-19 we are all sages.

Hence the sage is like an empty hollow. He

cherishes no knowledge. He dwells in the

world of change and utility, yet holds himself

to the realm of non-activity (wu wei). He rests

within the walls of the nameable, yet lives in

the open country of what transcends speech.

He is silent and alone, void and open, where

his state of being cannot be clothed in

language. Nothing more can be said of him.

Essence of Zen, by Stephan Schuhmacher, 2009;

What can we say?

What can be said of us?

And 1500 years from now, who, really, will recognize our difficulty of understanding?

And what are "saturated phenomena".*

Bedazzlement and overwhelmingness are marks of saturated phenomena, especially those that are "unbearable according to quantity" such as the painting as idol. It is in just this context that Marion gives the transfiguration as an example. But in the very same passage, he gives the teaching of Jesus as another example, citing John 16.12: "I still have many things to say to you, but you do not yet have the power to bear them."8 Marion might as easily have turned to the gospel of Mark. There we find people amazed when Jesus cast out an unclean spirit (Mark 1.23-27) and when he healed the paralyzed man let down through the roof (Mark 2.3-12) but also at Jesus’ teaching: "They were astounded at his teaching, for he taught them as one having authority, and not as the scribes" (Mark1.22). The phenomenologist can and should take note of the fact that such teaching and the faith that receives it can be and have been experienced as a supernatural gift of supernatural grace. But that does not make Jesus’ teaching miraculous in the sense in which casting out demons and healing the sick are miraculous. In short, the phenomena of revelation need not be miracles.

It might be helpful here to recall Mary Magdalene as portrayed in Jesus Christ, Superstar. She sings, "I don’t know how to love him . . . He scares me so." While Jesus was unquestionably a saturated phenomenon in her experience, it would be a strange reading to assume that what scared her about him was the healings and the exorcisms. Quite clearly, what bedazzled, overwhelmed, and even scared her was the way he loved her, and there is nothing of magical realism in the implicit narrative of her relation to Jesus that underlies her portrayal in the musical.

That which exceeds what our intention can grasp. An intuition beyond verification or full comprehension.

Where fully foolish sages loiter in contemplative repose while less foolish insurgents run to tackle fabricated meaning fully geared with zip-ties tiptoeing alongside at their ready.

* Jean-Luc Marion's claims about givenness and the self of the phenomenon culminate in his new category of “saturated” phenomena. According to Marion, some phenomena give more intuition than is needed to fill a subject's intention. Such phenomena are “saturated” with intention, and exceed any concepts or limiting horizons that a constituting subject could impose upon them. Marion describes five possible types of saturated phenomenon, and then presents a “figure” as an example of each type. Marion develops his concept of saturated phenomenon across three main texts. In Marion's early texts, saturated phenomena are introduced as a way of making space in philosophy for specifically religious phenomena. Even in his later texts where Marion omits this religious context, the examples of saturated phenomena that he chooses are somewhat obscure, and might be regarded as no more than interesting curiosities.

It makes me wonder whether what we refer to as 'higher dimensions' and 'miracles' are the fields of intuition and mystical glimpse that resemble and reside in uncategorizable experiences.

“He lived at a little distance from his body, regarding his own acts with doubtful side-glances. He had an odd autobiographical habit which led him to compose in his mind from time to time a short sentence about himself containing a subject in the third person and a verb in the past tense.”           (― James Joyce, Dubliners)

May we all dwell well where we are!

And not be afraid of the turn, either in the road, or in our consciousness!

Posted by meetingbrook at 4:39 PM

For God's name, and

Thump of cat jumping down, crunch

Of kibbles reach me

Posted by meetingbrook at 10:50 AM

Posted by meetingbrook at 3:19 AM

when everything goes away 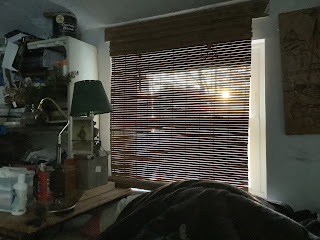 Everything begins
Again
Posted by meetingbrook at 7:06 AM

suffer us not to mock ourselves with falsehood

From his poem AshWednesday, by T.S.Eliot, an excerpt:

Wavering between the profit and the loss
In this brief transit where the dreams cross
The dreamcrossed twilight between birth and dying
(Bless me father) though I do not wish to wish these things
From the wide window towards the granite shore
The white sails still fly seaward, seaward flying
Unbroken wings

This is the time of tension between dying and birth
The place of solitude where three dreams cross
Between blue rocks
But when the voices shaken from the yew-tree drift away
Let the other yew be shaken and reply.

And let my cry come unto Thee.

Posted by meetingbrook at 5:20 AM

I’ve been thinking about our practice.

We converse from what has gotten our attention.

We take a brief silence

We have a final circle.

We recite the bodhisattva vows.

We pronounce a metta blessing.

Posted by meetingbrook at 7:09 AM

One plus one is one.

There is no two.

(Three hides within every calculation.)

Posted by meetingbrook at 12:26 AM

if we were to think about it

Post-impeachment, we can say this: Trump's presidency has amended the Constitution. Not formally, of course, but informally...which matters just as much. Here are the five Trump amendments. 1/9

1. "No president shall be removed from office for treason, bribery, or any other crime or misdemeanor provided a partisan minority of the Senate will protect him (which is always). Impeachment is thus a nullity and presidents can expect impunity." 2/9

2. "Congressional oversight shall be optional. No congressional subpoena or investigative demand shall be binding on a president who chooses to ignore it." 3/9

3. "Congressional appropriations shall be suggestions. The president may choose whether or not to conform with congressional spending laws, and Congress shall have no recourse should a president declare that his own priorities supersede Congress's express will." 4/9

4. "The president shall have authority to make appointments as he sees fit, without the advice and consent of the Senate, provided he deems his appointees to be acting, temporary, or otherwise exempt from the ordinary confirmation process." 5/9

5. "The president shall have unconstrained authority to dangle and issue pardons for the purpose of obstructing justice, tampering with witnesses, and forestalling investigations. There is nothing anyone can do about this (see Amendment 1 above)." 6/9

Let's count our blessings. Had Trump won a second term, he'd have put through a 6th amendment: "The president may ignore or violate court orders." 7/9

Still, the existing Trump amendments give the president WAY more discretion and impunity than the Founders intended. After Trump, we're more dependent than ever on the president's character to prevent a quasi-monarchy. 8/9

And more than ever, there's a howling void at the center of the Constitution...one called Congress. 9/9

Posted by meetingbrook at 4:04 PM

“It’s a cold and it’s a broken Hallelujah!” (Leonard Cohen)

As cynicism and darkness

A page is turned.

beholding itself what is within without

Forty years I endured that generation.I said, “They are a people whose hearts go astrayand they do not know my ways.”So I swore in my anger,“They shall not enter into my rest.”

When door opens, face to face for that brief archeology of trawling recognition

Will nod to the other

Shut door, turn, walk together down to river as light begins to stretch

Sit, look out side by side, begin to talk

Our attention pulls slowly away

Back up the hill

Up over tree tops and building roofs

Far out into distant spacious emptiness

Off beyond what we can possibly understand

Beholding itself what is within without

Posted by meetingbrook at 3:38 AM