When the whole (“bursting forth, flowering,” Brahman) and the specific (“breathing,”Atman) realize their inseparability, a light shines through.

Nisargadatta Maharaj, (so says a zen teacher in a talk), makes the distinction between identity and inseparability.

His words to a visitor:


I may talk Non-duality to some of the people who come here. That is not for you and you should not pay any attention to what I am telling others. The book of my conversations [I Am That] should not be taken as the last word on my teachings. I had given some answers to questions of certain individuals. Those answers were intended for those people and not for all. Instruction can be on an individual basis only. The same medicine cannot be prescribed for all.Nowadays people are full of intellectual conceit. They have no faith in the ancient traditional practices leading up to Self-Knowledge. They want everything served to them on a platter. The path of Knowledge makes sense to them and because of that they may want to practice it. They will then find that it requires more concentration than they can muster and, slowly becoming humble, they will finally take up easier practices like repetition of a mantra or worship of a form. Slowly the belief in a Power greater than themselves will dawn on them and a taste for devotion will sprout in their heart. Then only will it be possible for them to attain purity of mind and concentration.[web 10] --Nisargadatta 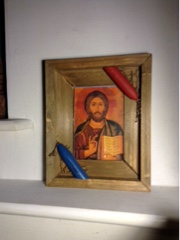 The cup’s inside and outside are not identical; they are inseparable. It is the difference between duality and nonduality. We are not the same. We are distinct. And, still, inseparable. 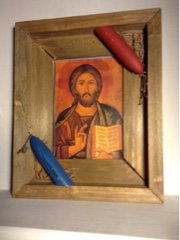 The lures and hooks do not serve only to bring something in. They also serve to frame the inseparable reality of seeing through what is seeing through us.

Of the unknowable only silence talks. The mind can talk only of what it knows. If you diligently investigate the knowable, it dissolves and only the unknowable remains. But with the first flicker of imagination, interest in the unknowable is obscured and the known comes to the fore. The known, the changing, is what you live with- the unchangeable is of no use to you. Only when you are satiated with the changeable and long for the unchangeable, are you ready for the turning round and stepping into what can be described, when seen from the level of the mind, as emptiness and darkness. The mind craves content and variety, while reality is, to the mind, contentless and invariable.

The person is merely the result of a misunderstanding. There is no such thing. Feelings, thoughts, and actions race before the watcher in endless succession, creating an illusion of continuity.
Only the sense 'I am' persisted- unchanged. Stay with the changeless among the changing until you are able to go beyond.
--Nisargadatta Maharaj

The cup in my hand is my circumstance.

Sipping tea is my morning.
I pray for inseparable delight of each with each with all.
Posted by meetingbrook at 10:24 AM

unwish / returns on its unself

There's no place to go.

Men with guns will holdup and rob and shoot anyone whenever they want. A military sniper becomes rich after killing 160-240 human targets. The entertainment movie makers become rich after making a movie about his killing -- both his killings and his being shot by another former military man.

Police gun down people again and again. All they have to claim is "He was reaching for something." Or, "He moved." The use of guns satisfies the ultimate dualistic desire, "Make him go away!"

There's no place to go. Where, exactly, do we think the dead go, Eh? Where?

"Dead" is what most people call energy and matter changing its form, disappearing from superficial view, and permeating our surrounding environment in unseen reconfiguring movement.

In other words, death is a transforming being surrendering its familiar form and entering temporarily a formless passage through every other transforming being in process of reforming and appearing again in different form. And so, we re-member one another.

And we, really and ultimately, face one another once more.

War on Error?
The enemy is erroneous thinking.
Prejudicial & fundamental error: failure to see the other as yourself.
We pay wages of error.
Posted by meetingbrook at 10:17 PM

Thank you, President Obama, for reminding us what we can do!
The next two years of Republican and Fox News domination will be a hard endurance for a detained America.
One glimmer of hope emerges with the prospect that RaFN will so ridiculously and rabidly attempt to dismantle common sense democracy and equitable economic balance that 2016 will be a revolutionary cakewalk return to the tasks of fairness, cooperation, and mutual respect for ordinary people, the businesses, and the governance involved in the still incomplete experiment that will become the United States of America. 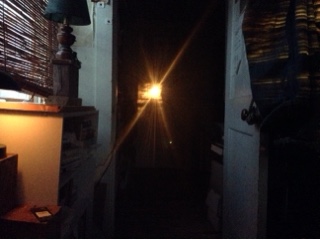 Posted by meetingbrook at 7:19 AM

Wanders in and out of room. I go downstairs, let the two of them out, load wood, sip juice, let them in, come back up. He is still restless. His mistress is away. He is very attached. Finally I bring green mattress in from vacant front room, lay it by door, and he walks over it and tries to fit himself down elsewhere, his large body by foot of bed after banging his head on footboard, twice. The mat holds only his chewed hedgehog. He is down by chair, temporarily, there.


To become who we are as creatures made in the image and likeness of God, we have to be nothing and everything at once, since this is what God is. ... If we accept who we are, we are manifesting God and radiating Christ. The latter unfolding of the divine life within us does not need to go anywhere or do anything special."
(--Thomas Keating, Contemplative Outreach News, December 2014)

It seems there is less and less need to fuss and fret. Everything is what it is and is fine. Nothing makes much sense nor needs to.

Visiting friend growing so thin with Parkinson's I promise to hold in prayer her sons and her as she navigates her program of recovery, diet, and interior clearing of stress and worry -- even as events bring more of the two her way.

Any wording that suggests this is happening because of that, or explains in any way why things are the way they are, feels so unsatisfactory and imaginary. That things are how they are seems an easier acceptance than trying to find reason for such.

Prayer is holding others in the light of blessing, a joining with, so as to remind oneself of connection, compassion, and collative community. What good does that do? I don't know. I just do it. In a vacancy of solutions, attentive presence appears a useful activity, even presence at a distance. So, I pray.

Big dog has moved to mattress. For now. Snores.

Posted by meetingbrook at 4:34 AM

falling in love (again) with Dr. King and the prospect of health


Surely this madness must cease. We must stop now. I speak as a child of God and brother to the suffering poor of Vietnam. I speak for those whose land is being laid waste, whose homes are being destroy, whose culture is being subverted. I speak for the poor in America who are paying the double price of smashed hopes at home, and dealt death and corruption in Vietnam. I speak as a citizen of the world, for the world as it stands aghast at the path we have taken. I speak as one who loves America, to the leaders of our own nation: The great initiative in this war is ours; the initiative to stop it must be ours.
This is the message of the great Buddhist leaders of Vietnam. Recently one of them wrote these words, and I quote:


Each day the war goes on the hatred increased in the hearts of the Vietnamese and in the hearts of those of humanitarian instinct. The Americans are forcing even their friends into becoming their enemies. It is curious that the Americans, who calculate so carefully on the possibilities of military victory, do not realize that in the process they are incurring deep psychological and political defeat. The image of America will never again be the image of revolution, freedom, and democracy, but the image of violence and militarism.  [Unquote]

If we continue, there will be no doubt in my mind and in the mind of the world that we have no honorable intentions in Vietnam. If we do not stop our war against the people of Vietnam immediately, the world will be left with no other alternative than to see this as some horrible, clumsy, and deadly game we have decided to play. The world now demands a maturity of America that we may not be able to achieve. It demands that we admit we have been wrong from the beginning of our adventure in Vietnam, that we have been detrimental to the life of the Vietnamese people. The situation is one in which we must be ready to turn sharply from our present ways. In order to atone for our sins and errors in Vietnam, we should take the initiative in bringing a halt to this tragic war.

King told the truth about the terrible cold afflicting America.

As the 9th grade white girl wrote him in 1958 after he'd been stabbed in the chest, "I'm so happy you didn't sneeze." Had he sneezed, the papers said, the knife would have penetrated his aorta and he would have drowned in his blood.

The United States' nose is twitching, having been elongated by lies, and is in danger of sneezing.

One can only hope, and pray, and work for the cold to pass, for health to be gained, and for the sneeze to pass unsneezed.

Posted by meetingbrook at 10:23 AM

1. to gather or arrange (pages) in their proper sequence.

2. to verify the arrangement of (the gathered sheets of a book) before binding.

4. to verify the number and order of the sheets of (a volume) to determine its completeness.

[1550–60; < Latin collātus, past participle of conferre to bring together; see confer]

(--from The Free Dictionary)